The Netherlands is good at mechatronics, the multidisciplinary field centred on integrated mechanical systems that carry out their work by means of a clever combination of sensors, actuators and control engineering. Just Herder, professor of interactive mechanisms and mechatronics and new chairman of TU Delft’s Department of Precision and Microsystems Engineering, likes to look into the future, at what is unofficially called ‘mechatronics 2.0’. Whereas the elements of mechatronics have traditionally been separate entities, Herder is trying to integrate these elements with each other to the fullest extent possible. ‘We can do it on a smaller scale and with more precision, using fewer materials and less energy.’

Why does a mobile phone have separate parts to process zeros and ones, to probe the outside world and to emit a vibration?’ Herder asks. His research group is attempting to integrate different functions with each other in a smart way. An important advantage of this approach is that it is highly suitable for miniaturisation. And that is how Herder found himself in the magical world of nanotechnology. ‘If we want to continue to make increasingly small computer chips, then the machines that do it are going to have to become more and more precise as well, without their energy consumption going off the charts.’ Herder imagines a point on the horizon in his field of research: ‘Now that chips are being produced with the precision of a millionth of a millimetre (the scale of the nanometre), we also have to start thinking about transformations at the nanoscale in the moving container that transports the chip from A to B during the manufacturing process. An actuator layer between the container and the chip can compensate for transformation at the nanometre scale in the container, thus protecting the chip. But would it also be possible to completely replace the container with thousands of miniscule fingers, which allow the chip to crowd surf with the highest possible accuracy? Perhaps these fingers could inspect the chip in the meantime too.’ Manufacturing and controlling these kinds of smart fingers is one of the single biggest challenges for the new mechatronics.

Elastic mechanisms with extremely low stiffness are an important tool. Replacing traditional mechanical systems, for example based on layers, with pliable alternatives will create a material surface onto which active layers can be placed. Electro-active polymer layers, for example, can act as sensors and piezoelectric layers as actuators to generate movement. Thus movement, actuation and sensing would be combined in one continuous structure. This structure wastes less energy and is also easy to scale down. ‘This is another way of looking at mechanical engineering equipment,’ Herder says. ‘At the moment equipment is being made that is increasingly large in order to achieve greater precision, and for that reason they use up more space, material and energy.’ 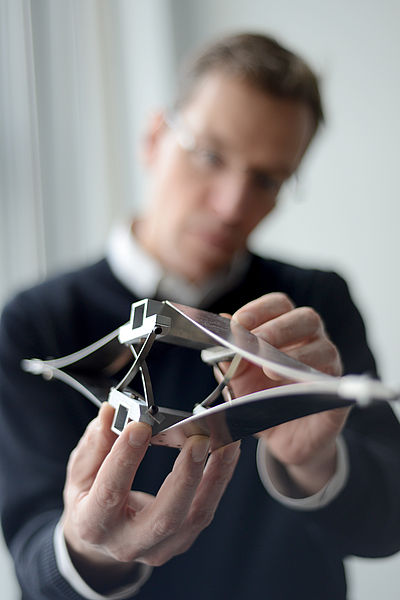 A special property of mechanisms with extremely low stiffness that is being studied in Herder’s group is the fact that they can be used to ‘harvest’ energy in slow movements. ‘Think, for example, of a sea container,’ he explains. ‘In order to figure out where it is located, you would basically want to build a GPS tracker in it that emits an occasional signal. But you want to avoid having to constantly replace the batteries. A simple mechanical system that gets energy out of the movements that the container makes while it crosses the ocean does not need a battery.’ The applications are countless, and Herder is working in close cooperation with industrial partners. The spin-off company that emerged from Herder’s research on flexible mechanical parts, Flexous BV, has already launched a subsidiary company called Kinergizer BV that focuses specifically on energy harvesting applications.

‘In five years,’ Herder says, ‘I hope we will have succeeded in fully integrating these low-stiffness mechanisms into microelectromechanical systems (MEMS), manufactured by means of prevailing chip manufacture techniques. ‘If we can apply these commonly used techniques to also build integrated MEMS/mechatronic systems, it will open up a whole world of opportunities.’ During the same period, he expects advances to take place in the area of bio-inspired robots, which can manoeuvre autonomously through unstructured environments, such as certain organs in the body, in order to inspect them around the clock for long periods of time. ‘Nature does not use propellers to generate movement through a fluid. Instead, this task is performed by cilia or flagella. The combination of mechatronics and nanotechnology provides opportunities to build these kinds of systems on the smallest possible length scale. We have already achieved initial results on a larger format. In the coming years I hope that prototypes will be able to move autonomously, similar to the way robot vacuum cleaners do.’

Herder is enthusiastic about the potential of the combination of mechatronics and nanotechnology in his department. ‘I think there is a great deal more we can achieve. Innumerable interesting phenomena are there for the taking now that we can inject nanotechnological expertise into the area of mechatronics. It will enable us to produce materials, instruments and equipment that work thanks to nanotechnology (“nano-enabled”), and, conversely, develop machines that produce products on a large scale based on nanotechnology (“enabling nano”).’ Indeed, he has great expectations of the Nano-Engineering Research Initiative (NERI) initiative. ‘The great thing about NERI is that it combines fields of expertise into one department. I have limited understanding of nanotechnology but all the more of automation. For others it is precisely the opposite. The lines are short. We are thinking up the most exotic plans and keep discovering that these plans are actually feasible as long as we do it together.’ In addition to the projects being carried out in partnership with industry, Herder views NERI as a new way of pursuing productive partnerships and safeguarding continuity in the long term. ‘The idea is to provide group support for certain lines of research. Companies from different branches of trade interested in the same research topic join forces. Because the participants have different applications in mind, there is a great deal of leeway for collaboration instead of competition.’ At the moment Herder and his colleagues are very busy with the first NERI contracts. ‘This is the tipping point. NERI will enable us to showcase what we have to offer and what we are worth.’