As soon as Arthur Vrijdag, researcher and university lecturer in nautical mechanical engineering, hydromechanics and control technology, walked into the Haptics Lab run by David Abbink, associate professor of human-robot interaction at the Department of Cognitive Robotics, his creative juices started to flow. There he saw all kinds of strange joysticks and levers that could generate steering commands and on which you could feel forces (referred to as haptic feedback). Right away he thought: ‘why isn’t this happening with ships yet?’ Arthur and David wrote a cohesion proposal to develop a haptic simulator for maritime application. This simulator can be used to design and test prototypes. They used the money granted to hire researcher Frank Hoeckx. He worked on their idea for a year.

Haptics in the maritime world
Haptics in the maritime world is still uncharted territory. Why though? And what are its potential benefits? Haptic feedback means receiving feedback through forces, the sense of touch in other words, and is so naturally present when we move our bodies that it is difficult for us to imagine it not being there. But just try to tie your shoelaces when your fingers are freezing!

Abbink shows that haptic feedback provides better control and situation awareness in steering vehicles, compared to only visual feedback or warning feedback. Moreover, haptic feedback can help when we interact with semi-automatic systems. Abbink has already managed to implement this in cars. At the moment, he is doing further research on this in his VIDI project ‘Symbiotic Driving’. Haptic feedback allows a helmsman to feel that the lever is being pushed back when he has to reduce speed, for example if he is approaching the quay to dock too fast. Haptic feedback can not only increase safety, but it can also reduce costs, such as fines for arriving too early or too late: a vessel’s speed can be ‘guided’ by haptic signals that can be easily pushed aside temporarily by the human if necessary. As a result, the pilot remains directly involved and still receives support to get to the destination on time. In addition, haptics can play an important role in supporting captains during long voyages, as the helmsman’s action are literally being ‘steered’. Test setupFrank Hoeckx built a test setup together with automation supplier Bachmann and the Rotterdam supplier of simulators VSTEP, which will enable users to experience a number of basic principles of haptic feedback in shipping. David and Arthur give regular demonstrations with this test setup of examples of haptic feedback in maritime operations. They hope that these demonstrations will make companies in particular enthusiastic about becoming a partner in a Joint Industry Project. A Joint Industry Project would enable David and Arthur to develop more specific applications and prototypes that are directly aligned with the needs of industry. Indeed, they have organised multiple demos in Delft, and this week they attended the Marine Electrical and Control Systems Safety Conference (MECSS) in Glasgow to show the setup to industry and science. Read more here. 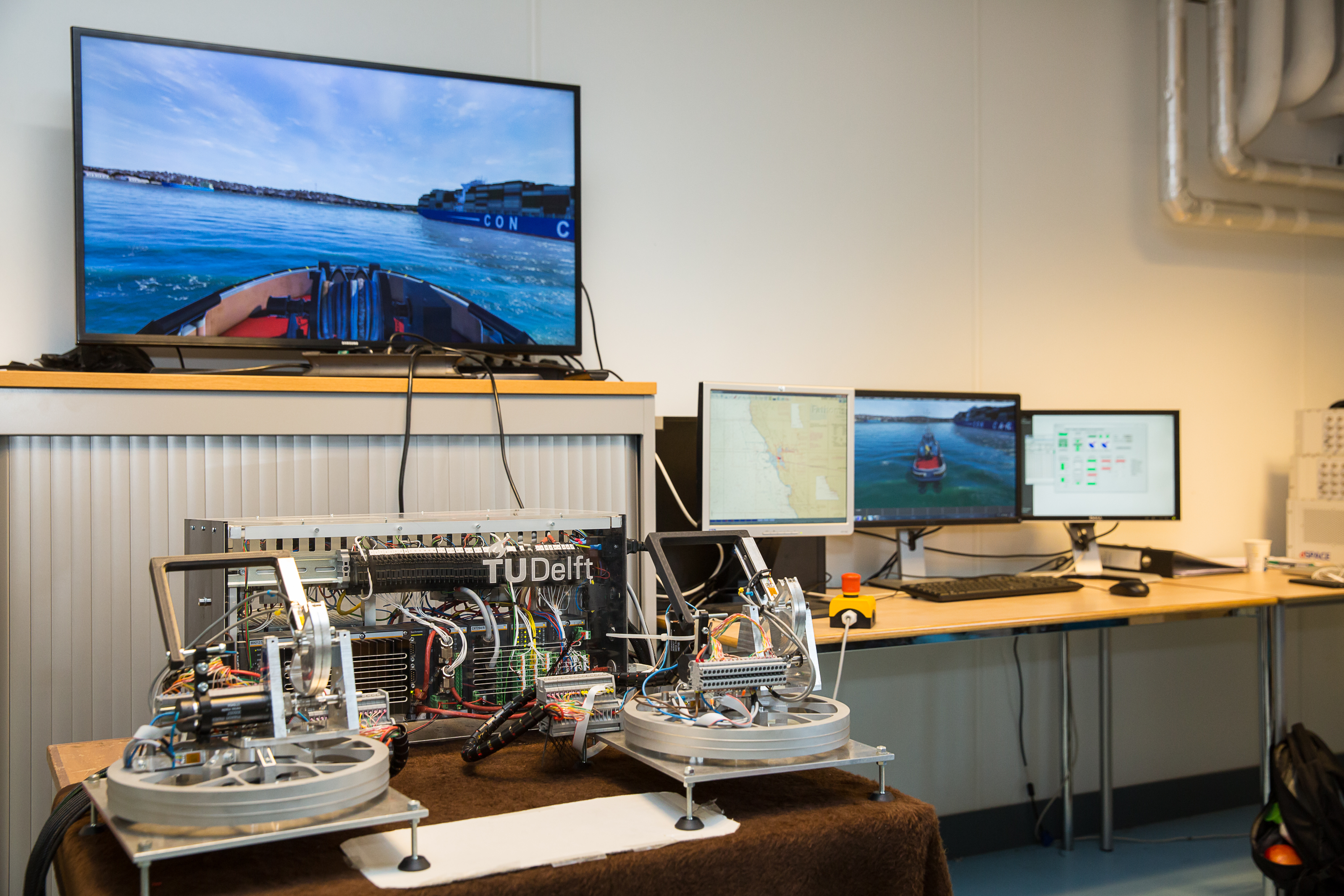 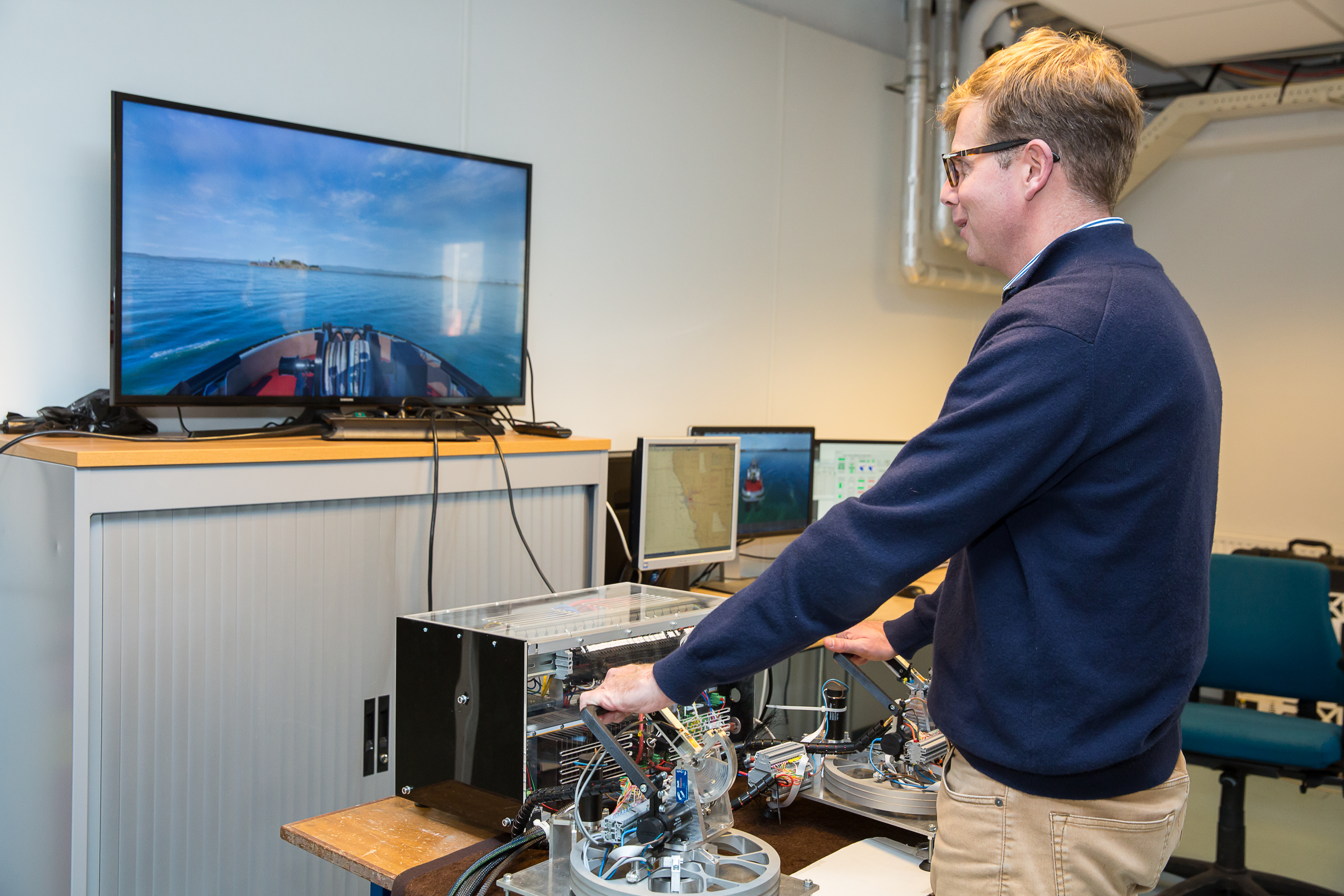 Arthur Vrijdag:‘There are increasingly few people on ships these days who have to perform their tasks faster and more efficiently. They are reaching the limit of how much information they can still assimilate. It would help if they could really feel this information by means of intuitive ‘haptic force feedback’. It can also provide solutions for interacting with autonomous ships. Moreover, operating a vessel by remote control is safer and easier if the operator receives haptic feedback. We are now going to further examine exactly how useful haptic feedback is for the maritime world. David and I believe in it and are sure that this can be a game changer.’