People with an interest in ICT, Technology and Water are a real rarity

Abel Heinsbroek graduated with top marks in the faculty of Civil Engineering and Geosciences in 2016 and was able to start work as a process technologist with water company Vitens straight away. He has remained in contact with TU Delft: “I've already had four students complete their final Bachelor's projects with us.”

It was obvious from an early age that Abel would enter the world of technology. “If anyone asked me what I wanted to do, I always said something like inventor”, he explains. He opted for Delft because of the city, but also the good reputation that Civil Engineering has here. He soon realised that he had a preference for waste and drinking water technology: “That combination of microbiology, chemistry, physics and pure civil engineering appealed to me. It also has an international orientation.” When the opportunity arose to spend several months researching in Mozambique with support from the Marc van Eekeren Travel Fund, he seized it with both hands. “It was a case of rolling up your sleeves and soon discovering that drinking water can't be taken for granted in the way we might think.” 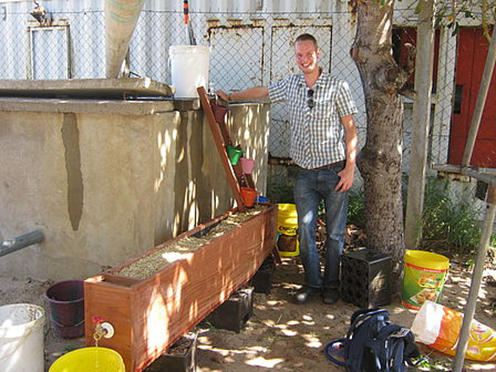 Abel worked with students from a local university on research into drinking water quality in a small village on the coast of Mozambique, exploring whether anything could be done there with very limited resources. “We improvised a mini water treatment plant using a wooden container filled with gravel from a nearby quarry. You could use it to filter 75% of the iron from the water. But however good your ideas are, you always need someone to invest in them”, says Abel. “It's also impossible to change the world in the space of three months. The aim of my project was to raise people's awareness of what their water contains and come up with potential solutions. Of course, the main objective for me and the other students was to learn something from it. It was great fun. That was when I developed my passion for drinking water.”

He was able to pursue it further during his Master's programme in water management, which not only covers drinking water technology, but other aspects, including sewers and health technology. For his graduation, he tackled a well-known water treatment problem: the formation of limescale on filter membranes. “I researched the mechanism in which calcium carbonate particles form on particles of calcium hydroxide. This is something we actually wish to avoid but if we apply it in the right way, we can prevent limescale forming in other places where we don't want it to be.” He worked on the entire process from the initial idea to the pilot. “It started with a wild idea from my supervisor Bas Heijmans. I then developed a model to explain what happens and a test installation on which I could test it. It was a semi-professional machine: a completely computer-controlled water treatment system with pumps and valves.” 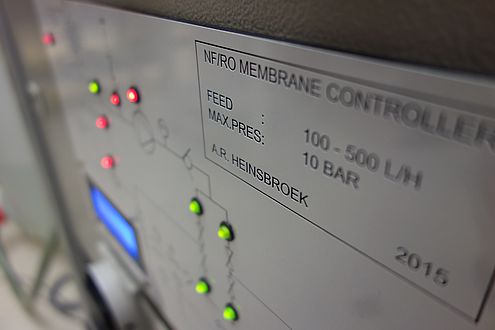 Although it took longer for him to graduate than usual, there were numerous benefits. He not only received top marks, but his professionally-finished device is still in use, currently for PhD research into other types of water pollution. Abel now works at Vitens, where he can combine his knowledge acquired while studying with his experience in ICT. “As a student, I also always worked in the ICT sector developing websites and apps. At Vitens, I am now working at the interface between ICT and water treatment – completely in line with what I wanted.”

Abel is working on advanced modelling of drinking water treatment with a view to making the process more autonomous. “We now pump up groundwater and it passes through a series of treatment processes and the end-product goes to the customer. In this, our main focus is on monitoring the quality of the end-product; we don't fully understand what exactly happens during the interim processes,” explains Abel. “The groundwater emerges from a range of wells of different quality and arrives at the treatment plant in varying quantities. Currently, we use plenty of chemicals to ensure that it always goes well. I want to use my system to predict how much energy and chemicals are actually needed in specific situations.”

Knowledge and experience in a system

Less energy and fewer chemicals is of course much more sustainable, but is not the only reason for developing an intelligent water treatment system. “At Vitens, we have 96 water plants, staffed by people who have as much as 30 years' experience and know everything about the systems. These operators are retiring or moving elsewhere. We have real difficulty holding on to that knowledge, partly because very few people work for the same employer for 30 years these days. This is why we're trying to capture this knowledge and experience in a system.” Thanks to his experience in modelling and programming and to his affinity for drinking water, Abel was the ideal candidate for Vitens. “However, if we intend to do much more with automation and modelling in the future, people with my skill set will still be quite a rarity,“ says Abel.

This is another reason for maintaining links with the University. “We need more process technologists with an ICT affinity, which is why we are now trying to interest more students in it.” It's proving successful, since we have already had four Bachelor's complete their final projects at Vitens. Abel also continues to seek out alliances on other fronts. “Our drinking water often contains methane. Currently we blow it out and it enters the atmosphere. We now intend to capture and make good use of it. We already have a traditional gas generator, but now plan to work with the Process and Energy Lab at 3mE to see if we can also use fuel cells for this purpose.”

He came up with the idea of fuel cells with a fellow student who is doing a PhD on the subject. “I am still in touch with my best friends from my years in Delft,” he says. “My time at university was a superb experience. I also had an opportunity to do lots of other things as well as study. I rowed for Proteus for years and organised study trips. These were great formative years for me.”