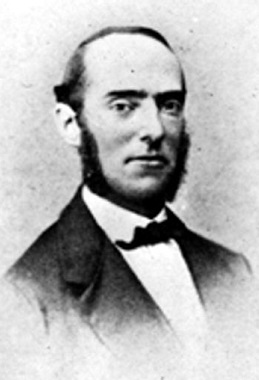 Dr Ir Lewis Cohen Stuart graduated from TU Delft (then the Royal Academy for the Education of Civil Engineers) in 1848 with a degree in Civil Engineering. After completing his studies, he began working in Delft as a tutor (repetitor). The following year, in 1849, he spent a few months studying in Leiden with Frederik Kaiser and Gideon Jan Verdam. In 1851, Stuart was appointed as a temporary teacher in Delft to replace H. Strootman, who was unable to teach due to illness. Shortly thereafter, he became a lector in Mathematics, as Strootman’s successor. In particular, he focused on geodesy. He taught analytic geometry, descriptive geometry, higher algebra, cosmography and geodesy, and later also differential calculus and mechanics. In 1862, at the request of Leiden professor Frederik Kaiser, Stuart conducted a study on the triangulation measurements of Cornelis Rudolphus Theodorus Krayenhoff from the early 19th century. The following year, in 1863, Stuart was appointed Doctor of Science honoris causa. By Royal Decree of 30 June 1864, Stuart was appointed director of the Polytechnic School of Delft, which replaced the Royal Academy of Delft. He held this position for some fourteen years, and was succeeded in 1878 by Johannes Bosscha Jr. Stuart was a member of the board of The Royal Netherlands Society of Engineers from 1859 to 1865, and from 1868 to 1871. He was appointed as a member of the Royal Netherlands Academy of Arts and Sciences (KNAW) on 8 May 1865. In 1865, he also became a member of the Batavian Society for Experimental Philosophy in Rotterdam.

In 2017 TU Delft is celebrating its 175th anniversary. TU Delft has selected Dr Ir Lewis Cohen Stuart to expand its Alumni Walk Of Fame. This award recognises Cohen Stuart for his exceptional career and his appointment as the first professor-director of the Polytechnic School.