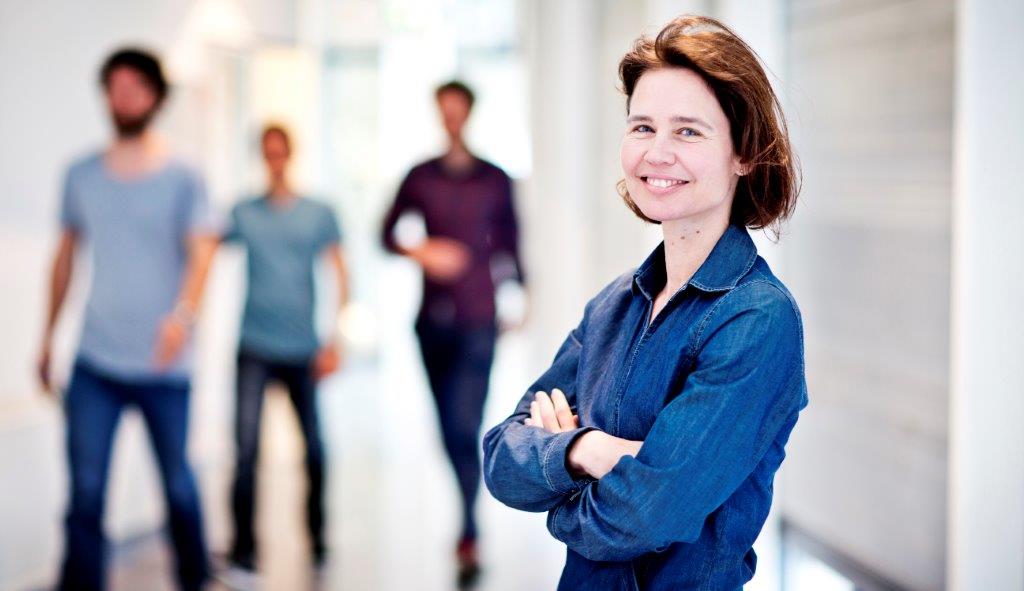 In aircraft, noise is an unwanted side-effect of propulsion. In sonar, it is a useful tool for conducting accurate depth measurements. But irrespective of whether it involves a disruptive noise or the useful application of sound, it always tells you something about the source and the surrounding environment. As Associate Professor in the Aircraft Noise and Climate Effects (ANCE) group, Mirjam Snellen specialises in techniques for imaging sound and using sound for imaging. She is only happy when all of the information has been extracted from the measured noise, often using detectors developed by the group.

With its noise research, the small and close-knit ANCE research group, led by Prof. Dick Simons, is deliberately positioned at the interface between metrics and modelling. “If all you do is measure and take readings, you will not have the knowledge to design quieter aircraft,” says Mirjam Snellen. “Other groups are specialised in calculation. They build models that use the shape and material of an aircraft fuselage to predict the noise that it will produce at different speeds. Of course, this then needs to be validated using measurements.” As far as the ANCE group is concerned, even an accurate noise reading on a scale model in a wind tunnel is not sufficient. They prefer to measure it in practice, in the most realistic conditions possible. A key factor in this process is to ensure that the source of the noise, in this case the fuselage, can be properly separated from other noise sources, such as the engines. Mirjam Snellen: “We can achieve that in ANCE, using our arrays”.

A single microphone only enables you to measure the volume and pitch of the sound. This changes if you use an array of several microphones, spread across a surface. For example, the noise that comes from the aircraft's nose cone reaches the closest microphone first, followed shortly by the microphones slightly further away. Software can be used to reconstruct the different sources of noise. “This is called beamforming,” explains Mirjam Snellen. “We can use it to separate the measured noise over time according to source location, pitch (frequency) and volume. We then make corrections for background noises, noise reflections on the ground and the Doppler effect, if necessary.” Certain preconditions are required for an array of this kind. To achieve a good resolution of the low pitches, which have a long wavelength, the microphones need to be slightly further apart. For the higher pitches, they need to be slightly closer together, to prevent distortion. For this reason, an array generally has a mixture of greater and smaller distances between microphones. An array is also limited in size in order to enable transportation.

The researchers in this group have mastered the beamforming techniques down to the finest details. In the summer, they took their first readings using the newly-designed array of 64 microphones, over a surface of 4x4 square metres. With it, they can also distinguish between the different sources of noise on small aircraft. Before setting off to work, the researchers always call the airport. “After all, you're going to be covering a large white surface there. Even now, someone from the airport always comes along, but that's just out of interest.” Array readings of this kind produce impressive pictures that clearly show which part of an aircraft produces which noise. The airflow around the wings typically results in slightly lower sound frequencies whereas the engines and the blast behind them produce higher frequencies. “Our measurements test the predictions made by models. If we are not expecting much noise from the undercarriage and our measurements show something different, the model may need to be revised.” In other words, different types of aircraft have different ‘fingerprints’ and this calls for a different way of reducing noise nuisance.

Schiphol and Lelystad airports are reaching their permitted noise limits and are committed to quieter aircraft for the future. In 2015, Prof. Symons joined forces with the German Aerospace Center (DLR) in organising a workshop with experts from across the world. The key question was to what extent can aircraft become quieter, and how can this be achieved. “It's not easy,” says Mirjam Snellen. “For example, one option is ultra-high bypass engines. They are much quieter, but also extremely large and therefore heavy. The additional propulsion required to take off and fly could potentially end up increasing noise nuisance. Using alternative materials can alleviate the problem slightly.” The group is working on this together with the wind energy group in the same faculty, which is exploring the use of porous materials for wind turbines. “They could be used to make the nose and wing flaps or the landing gear of an aircraft slightly less noisy.” New developments like this are first tested in a wind tunnel. For this research, the group placed a microphone array in the relatively quiet vertical wind tunnel. The walls were covered with absorbent material to minimise sound reflection. Mirjam Snellen: “The challenge is to only measure the object. The array itself cannot be allowed to cause sound reflections and the microphones need to be positioned to enable precise measurements and beamforming.”

It is easy to forget that the listener also plays an important role in noise nuisance and this also points the way towards new developments. If a group of test subjects are not disturbed by the hum from the fuselage, nothing needs to be adapted. Dick Simons was closely involved in the development of the Virtual Community Noise Simulator by the Netherlands Aerospace Centre (NLR). In it, you can experience the noise of a landing aircraft in a completely simulated natural environment. This requires carefully measured or modelled sound, something that the ANCE group can provide. Mirjam Snellen: “In a simulator, you can switch off the noise from the wings and engines only or change the pitch, for example.” Although the latter may seem futuristic, groups are already trying to achieve it using smart modifications in shape and material.

Beamforming also plays an important role in using echo sounding to determine the depth of water, which can improve safety in shipping. For example, precise information about the current water depths provides useful input for the frequency of dredging in and around the port of Rotterdam, ensuring it remains accessible even to the largest ships. Identifying water depths in this way can be done efficiently using multi-beam echo sounders (MBES). An MBES is an echo sounder that emits several narrow beams of sound simultaneously (a ‘ping’). Each of the beams propagates through the water, reflecting on the bottom before being recorded by the MBES again. Combined with the noise profile as a function of the depth, half of the time between sending and receiving a ping gives you the distance from the MBES to the bottom. Each ping identifies the bottom across a wide line, perpendicular to the direction of travel of the ship being studied. The entire bottom of the channel of water can be charted by using several parallel movements.

Mirjam Snellen: “in the Netherlands, we are one of very few groups with a good knowledge of all the technical details of MBES; the system, its impact on the environment and the algorithms.” The MBES systems are complicated and expensive but achieve the level of precision required by government of just a few centimetres at depths of up to several tens of metres. Any new systems and cheaper alternatives will also need to prove they can meet these criteria before they will be permitted for use by a dredging company, for example. Mirjam Snellen: “We have developed a model that determines whether measurements meet these standards, given a set of measurement systems.” In addition, it is possible to obtain more information from the current systems, for example by also looking at the intensity of the echo signal alongside its two-way travel time. Mirjam Snellen: “In recent years, we have developed several methods to not only determine the water depths, but also the composition of the seabed using MBES measurements. For example, would it be a suitable site for a wind farm?”

Using all of the data

It was her determination to obtain all of the information available from sound that resulted in a method for improving the accuracy of MBES depth measurements. The raw data from an MBES system has to be corrected for many variables, including the underwater sound speed profile. This depends on the pressure (depth), temperature and salt content. In estuaries or tidal areas in particular, local variations in the sound speed can result in inaccurate readings. Mirjam Snellen: “This lack of precision increases towards the edges of the strip being measured. In the past, this was simply accepted or the measurements were taken again. But that is not necessary if you realise that the strips measured partly overlap.” She developed an algorithm that uses the extra data from this overlap to calculate the sound speed profiles. “It's not an estimate, it's physics,” says Mirjam Snellen. “With the occasional re-measurement, of course,” she adds with a laugh.

Measurement is the key to knowledge

Her algorithm for the underwater sound speed profile was recently implemented in commercial hydrographic software, but actually originates from 2009. “As in other fields, it can take time for solutions to be applied in practice,” says Mirjam Snellen. Another current topic to which this applies is the calculation of aircraft noise impact at airports. For this, so-called noise power distance tables are used. “No one knows how accurate the use of these tables is. This is 2018, why not position some arrays at the airport and actually measure this noise experience?”