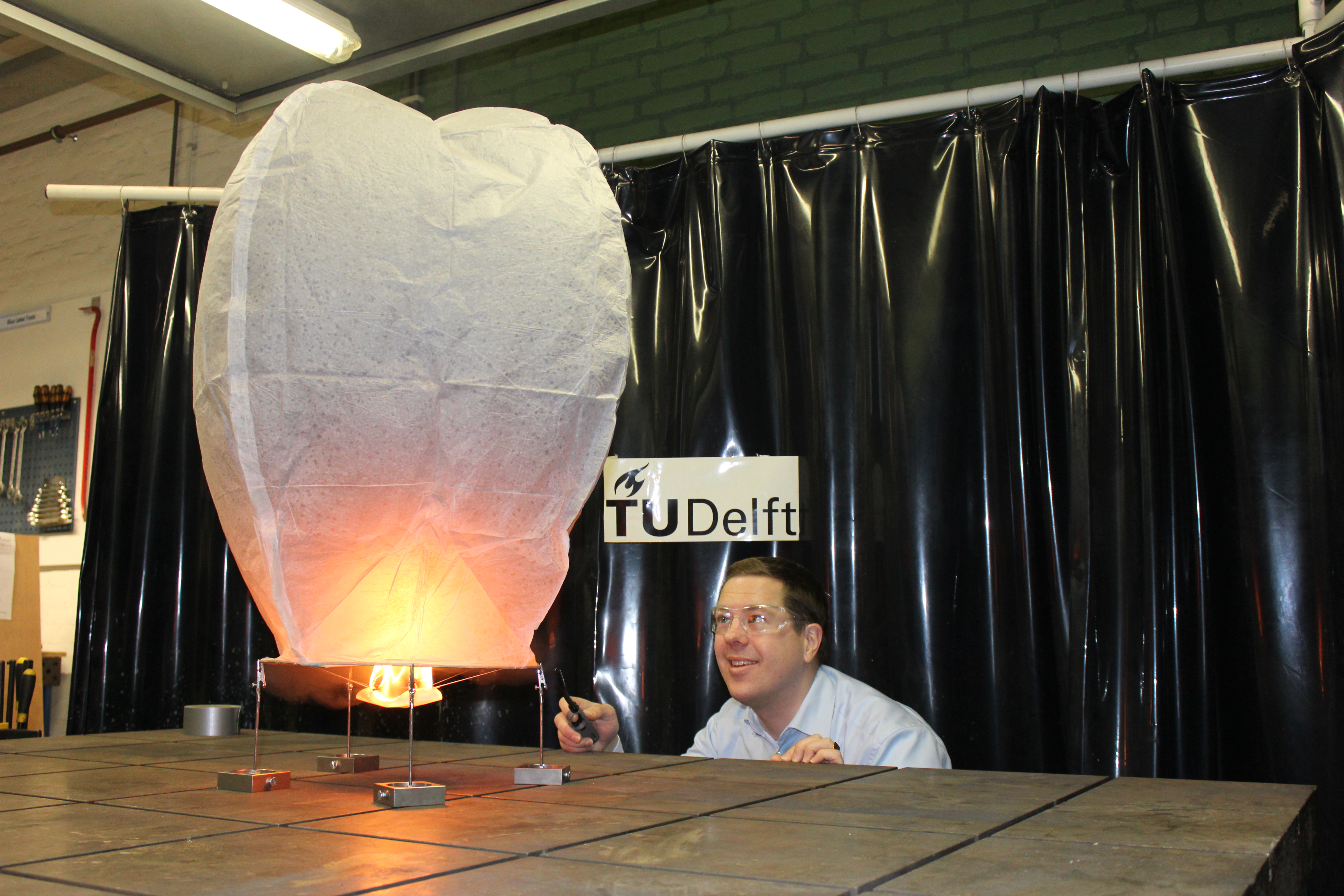 When it comes to romance, few spectacles can compete with a swarm of gently floating sky lanterns. They are especially popular on New Year’s Eve. Michiel Schuurman is also mesmerized by the sight. But as assistant professor in the Structural Integrity and Composites Group and as an instructor of the Forensic Engineering course he also sees the risks. Schuurman: “According to our measurements they reach much higher altitudes than allowed. They can even reach altitudes aircraft fly. And there is the risk of wildfires.” He and his colleague Derek Gransden performed experiments to model these risks. It can help authorities in evaluating existing sky lantern legislation.

Not near an airport

In the Netherlands a sky lantern is considered a toy and as such it is regulated by the Netherlands Food and Consumer Product Safety Authority (NFCPSA). The authority investigated sky lantern safety but according to Schuurman they limited themselves to the risks for the user and his/her direct surroundings. According to the recommendations of the NFCPSA, sky lanterns may only be launched when the wind force is less than three Beaufort and when the nearest (glider) airport is at least 15 km away. Schuurman: “This means that their use is limited to at most 20 days per year and to about one-third of the Netherlands. However, your wedding is today and ‘here’.” The fire brigade would like to see a nationwide ban on sky lanterns because of the fire hazard for forests, dunes and houses with thatched roofs. Such incidents have been reported but retailers claim to stick to the NFCPSA safety regulations. “What this discussion needs,” says Schuurman, “is clear data about the risks associated with the use of sky lanterns.” He and colleague Derek Gransden got to work.

Schuurman: “Up to now our research was aimed at the vertical flight profile of sky lanterns. What altitude can they reach and how long do they remain airborne?” Archimedes’ principle dictates that a balloon is positively buoyed upwards by a force equal to the weight of the air it displaces. After correction for gravity, the vertical acceleration of the balloon follows from Newton’s second law: force equals mass times acceleration (F = m×a). The balloon furthermore experiences drag. The three key parameters in balloon performance are the shape and volume of the balloon and the weight of the fuel cell. The fuel cell determines the amount of energy available to heat the air inside the balloon. The volume and temperature of the heated air determine the lift. “Our model is based on formulas for hot air balloons published in the seventies. We applied a number of simplifications such as the assumption of a uniform pressure and temperature inside the balloon.”

Schuurman and Gransden performed experiments with five types of balloons. First they determined their volume. This proved to be more difficult than anticipated as sky lanterns are very fragile. They can’t be filled with water. “The solution was to pack them with polystyrene beads from a bean bag.” In addition, the minimal lift of sky lanterns is a challenge to measure. Schuurman: “We experimented for six months before settling on a simple approach that provided the best consistency. Sky lantern lift is best measured by attaching them with a light string to known masses atop a digital scale. Reproducibility was still an issue due to varying workmanship. We observed large variations in the flight profile due to the little extra weight of excess adhesive surface.”

Schuurman and Gransden performed their experiments in a fireproof laboratory free from horizontal airflow. They monitored the temperature inside the balloon with an infrared camera while using a regular video camera to log the moments of ignition, lift-off and landing. “’Landing’ in our setup corresponds with the balloon reaching its pinnacle during an outdoor flight.”

“All balloons land within ten minutes after lift-off. But contrary to the findings of the NFCPSA, our model shows that a cruising altitude of more than 300 metres is common for sky lanterns rather than an exception.” On average they reach an altitude of 500 metres. That is the altitude where they interfere with small airplanes and with larger airplanes taking off and landing. “Many pilots told me about their encounters with sky lanterns. A single balloon will cause little to no damage to an airplane, but an entire swarm of sky lanterns can startle a pilot at a time when he/she needs full attention for a safe landing.”

“Our first results indicate that the sky lantern discussion needs additional research.” Schuurman and Gransden would now like to validate their model in the open air, tracking the balloons using a drone. This would require special permission. The next step is to model the horizontal flight profile. They already have the data of wind force and wind direction in the Netherlands needed for this. Building a risk model is the final step. Even though manufacturers use impregnated paper, the greatest risk of sky lanterns remains starting a wildfire. “If I launch my balloon from this location,” says Schuurman, “where will it go, what kind of vegetation and buildings will it come across and can it still be aflame when landing?” Their experiments and those by the NFCPSA show that the latter is indeed possible. Together they used only a few dozen balloons while sales in the Netherlands were already in the order of a few hundred thousand balloons in 2009. Add to that the rise in sales at firework shops and online.

In the summer of 2017 Schuurman presented their research at the AIAA Balloon Systems Conference in Denver, Colorado. The venue was packed with NASA employees and other balloon researchers, their eyes twinkling. “Just imagine,” says Schuurman, “these people operate balloons for researching earth and possibly other planets. Our research into sky lanterns may appear playful, but it certainly isn’t less scientific. Our completed model could be used by the authorities to re-evaluate existing sky lantern legislation.”