With Google Earth just a click away, we’ve gotten used to satellites. In fact, around 3,600 are currently orbiting the Earth. In 2018, Jasper Bouwmeester is hoping to add some of his tiny PocketQube  satellites to that total.

WorldView-4, one of the many satellites that produces those Google Earth images we’re so familiar with, weighs 2,500 kilograms and is 7.9 x 5.3 meters. In contrast, Bouwmeester’s satellites are 5 x 5 x 18 centimetres. They are part of a satellite group known as PocketQubes.

CubeSats were originally developed by California Polytechnic State University and Stanford University in 1999. Space agencies such as NASA and ESA launch large satellites but universities often don’t have the financing or the need to put such big contraptions into space. CubeSats aimed to allow graduate students to design and test satellites and, for that end, a much smaller scale was needed.

CubeSats fit into defined spaces on rockets carrying larger satellites launched by ESA and other organisations. A CubeSat consists of one or more standard units of 10 x 10 x 10 centimeters. Since their development a decade ago, CubeSats have become popular with universities and, more recently, space technology companies.

“TU Delft can’t compete,” said Bouwmeester, who is part of Space Systems Engineering at the Faculty of Aerospace Engineering. Space technology companies, especially those based in the US, get up to hundreds of millions in venture capital funding. Universities research groups don’t have access to that sort of money and the field of CubeSat development is currently dominated by private industry. According to Bouwmeester, TU Delft had three choices: leave the field, develop only very niche satellite applications or go smaller. The 5 x 5 x 18 centimetre plastic prototype on his desk is the outcome of that decision.

PocketQubes are yet smaller miniature satellites with a similar design model as CubeSats. At TU Delft, they are being developed in a method often found in software companies. “We took on a more agile approach,” said Bouwmeester. “Rather than very extensive testing and documentation, space itself serves as the ultimate test facility.” Some Earth-based testing is, of course, done on the satellites, with function, performance and for example on launch vibrations. “It would be extremely risky to other on-board satellites to have parts break off during the launch,” says Bouwmeester. 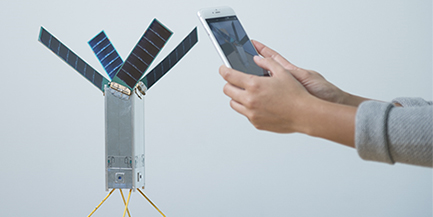 Despite their tiny stature, PocketQubes offer much to scientific progress. The simplistic design and inexpensive price tag means that young researchers and even students can work on them, creating an environment open to creative endeavours. PocketQubes are currently being used to test components and systems which will hopefully pan out for use on larger satellite applications. But, to some, their small size has also relegated them to the category of educational toys, rather than serious scientific instrument. Bouwmeester wants to change that perception.

Bouwmeester’s work focuses on the platform itself. “We want to make this platform capable and reliable,” he says. Understandably so, as conducting repair work in space is generally impossible. “You can’t manually turn them off and turn them back on again,” Bouwmeester says of his satellites. His research focuses on developing satellites that won’t require hard resets or other repairs.

3D printing technology has allowed satellite designs to be easily prototyped. “If a student has an idea about how to improve the structural design, we can print it here on our 3D printer,” he says. “If we test it and it fails, that’s still good. It shows us the value of the existing design.”

The majority of the work on PocketQubes at TU Delft is currently taking place within the Faculty of Aerospace Engineering, but Bouwmeester would like to broaden the research base. “We talking to researchers at other faculties and even companies about bringing their expertise to these projects,” he says.

His research group plans to launch their first PocketQube in early 2018. After that, they anticipate launching these satellites one to two times per year.