The aircraft design of the Flying-V is potentially much more efficient than the traditional “pipe with wings” design. The concept was received with great enthusiasm, but a lot of hard work will need to be done if the sustainable flying wing is to be ready by 2040. 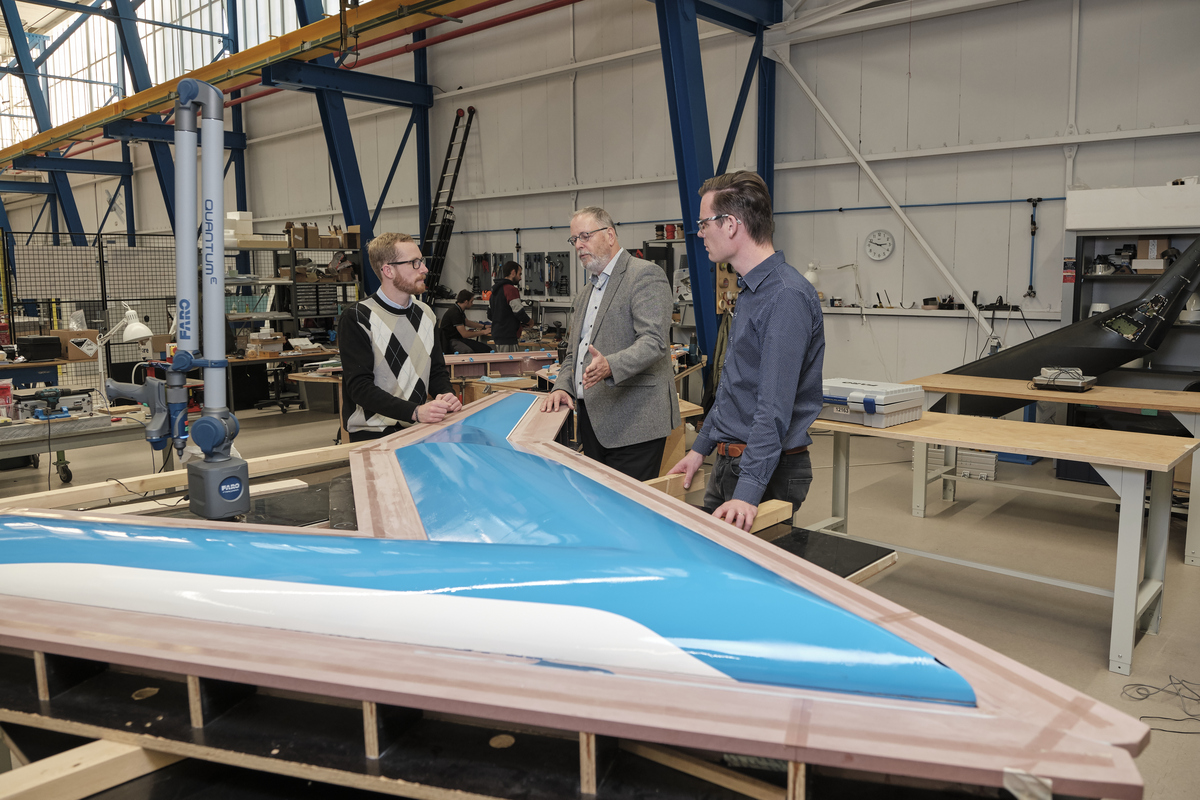 In June 2019, TU Delft and KLM presented their plans for the Flying-V: an aircraft designed to save 20% on both fuel and emissions due to its unique shape. KLM is sponsoring the project for sustainable flying as part of its 100th anniversary programme. During celebrations to mark the event last October, the scale model and the mock-up of the interior of the Flying-V attracted huge interest, and the story was covered by numerous media, from Dutch Design Week to the DWDD talk show. “Something we had been working on for years was suddenly in the spotlight”, explains Roelof Vos, project leader of Flying-V and Assistant Professor of flight performance and propulsion.

A patent that appeared in the media first drew Vos’s attention in 2014. Graduate Justus Benad from TU Berlin had come up with a draft design for Airbus, for a flying wing with seating for 300 passengers. “Most new aircraft concepts aren’t radically different from current designs. This one intrigued me”, says Vos. “It promised a staggering 10% improvement in aerodynamic efficiency and a 2% reduction in take-off weight compared with a conventional aircraft. My immediate reaction was: as critical researchers, we have to check these claims thoroughly.”

Vos also thought that he could improve the draft design: “We gave it an oval fuselage instead of a round pipe, and it became the Delft Flying-V.” The aerodynamics research based on this version improved the results even further than the original promising 10%. The prognosis for a lower take-off weight also turned out to be correct, although this was difficult to calculate for an aircraft that was still only a design on paper. “After consulting with experts from Airbus, we concluded that whatever else, the aircraft would not become heavier. Our claim is that the unladen weight will be 7% lower, but the total weight will depend on the interior and all the systems.”

The lower weight is largely due to the unique shape of the aircraft: “Passengers normally sit in the middle of the plane and the wings generate the lift; this force must then be transferred to the cabin. This requires extra construction weight, which is no longer needed in our design.” This is nothing new; it’s one of the ideas behind aircraft such as the Blended Wing Body planes (BWB), in which the wings, cabin and engines are designed as a single unit. “But the Blended Wing Body design is not attractive from an industrial perspective, as every aircraft needs to be designed individually, whereas the Flying V is easy to lengthen or shorten so you can build series of aircraft using 95% of the same parts”, explains Vos. 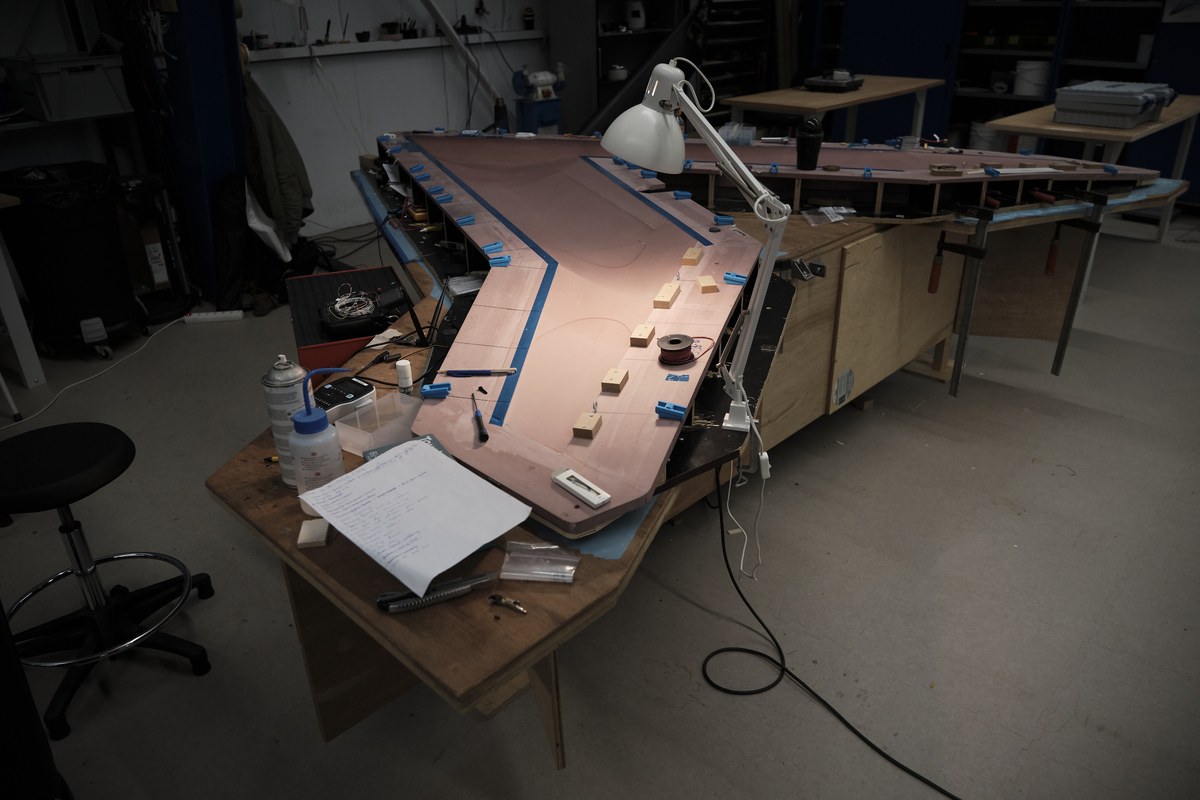 Work is currently underway in the Aeroplane Hall of the Faculty of Aerospace Engineering to construct a scale model of the Flying-V with a wingspan of three metres. Researcher Malcom Brown is heading the project. His students are closely involved, as they are with other parts of the project. “It’s great to see how much students learn from doing something practical like building a model that actually works”, says Brown. “Some of them aren’t as practical as others when it comes to things like drilling or filing, but that’s just as much part of the learning process. The model will be used for actual research flights, so we have to be as accurate as possible.”

A 3D measurement arm with laser scanner was purchased specially for the job. “The measurement arm allows us to determine the precise shape and location of components to a tenth of a millimetre. In this way, we can check whether all the parts we have ordered satisfy our requirements and are positioned correctly”, explains Brown. Despite all this accuracy, building a test model is a nerve-racking business, right up to the last moment. “Real life is never the same as the calculations, so we won’t know whether the aircraft can really fly, or the flight characteristics, until the test flights. Wind tunnel tests, for example, have shown that the aircraft might be less stable at a certain high angle. This didn’t show up in the computer simulations”, he continues. “Scaling up wind tunnel measurements to life-size test models is always a huge challenge in aerospace engineering.” A doctoral candidate is currently looking into ways of improving the theory behind this scaling up process; the research will be of use to other projects too.

Professor of Environmental Ergonomics Peter Vink, who is working on the plane’s interior, isn’t troubled by the scaling-up problems. Part of the interior has been built to true size and is currently on display in the Faculty of Industrial Design Engineering. “We are using the project as an opportunity to improve comfort for passengers”, he says. Four winning ideas were chosen from a design competition for students. They related to beds, lounge seats, group seating and individual seats. The beds make it possible for economy-class passengers to sleep horizontally, according to Vink: “We place three beds one above another, whereby the middle bunk can be slid up allowing the bottom bunk to be used for seating during take-off and landing. This is necessary to provide fast escape routes in the event of evacuation. You don’t lose any seating, because three beds take up just as much space as three seats”, he explains.

In the group seating, passengers sit opposite each other like they do on trains. “More than a quarter of all passengers fly in groups. Sitting opposite each other makes it easier to chat or play games with the children”, continues Vink. “The lounge seats allow you to sit in different positions, from chill to working with a laptop. It is important to change your position regularly, and with this seat, your position is determined by what you are doing.” The individual seats are not directly next to each other, but alternate and are mounted at an angle of 26 degrees to the aircraft’s flight direction. This is a safety regulation. “Sitting at too wide an angle to the plane’s flightpath is less safe if the plane crashes”, he explains. “But there’s another advantage to this arrangement: you have more leg and shoulder room.” Boarding and disembarking in these spots is also made easier because you can flip over the seat cushion. “You can also use the folded seat position if you want to sit a bit higher”, says Vink. 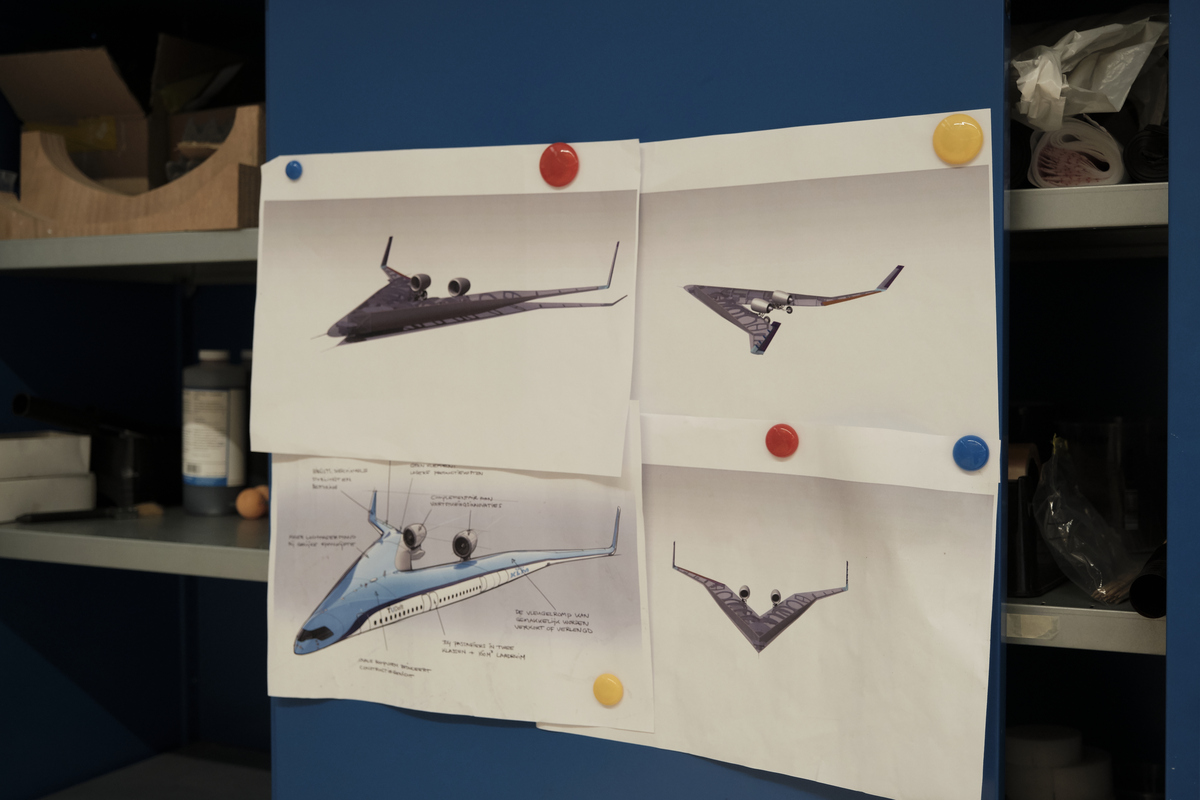 Sustainability was also taken into account in the interior design. “Interior constitutes weight, and the heavier the plane is, the more fuel you need. The seats we’ve designed are three to five kilos lighter than the current models. In the rest of the interior, we’ve tried to use as much openwork as possible, rather than solid structures, using generative design methods. This saves material and therefore weight.” Many of these ideas could be used in regular aircraft, but there are still some unanswered questions about the interior of the Flying-V. “For example, our plans don’t leave enough room for hand luggage”, says Vink. “Then again, we have until 2040 to think about it.”

Still so much to do

The media attention may have quietened down, but work behind the scenes is still in full swing. “This was an integrated project from the word go; all disciplines are involved. You don’t want to complete a fantastic aerodynamic design, only to discover that the finished product is far too heavy”, explains Vos. “So we recently met experts from across the sector to discuss the challenges they envisaged. We ended up with a list of almost 50 subjects that need further scrutiny.”

They varied from highly practical to totally theoretical. “This new aircraft must be capable of landing and being serviced at existing airports. Imagine if you have to change an engine and they’re fitted on top of the wings. You can get to them using a crane at Schiphol, but what about at other airports in the world?” And there are more conceptual questions about the dynamic stability of the design. “You need to know precisely how the mass is distributed and how the aerodynamics change at different speeds”, says Vos. “We can measure some of this during the test flights, but a small test model doesn’t fly fast enough to be able to draw any definite conclusions. We can try to estimate it using existing methods, but these were designed for the existing models. So in order to do this, we need to come up with a clever way of combining the results of various tests and analyses.”

All three of them agree about the need for a new configuration. “You can’t just carry on using the current solutions”, claims Vink. “Existing configurations only allow incremental, minor improvements”, adds Vos. “This may well be the first step in the next phase of aviation”, says Brown. “The sector knows that it needs to modernise. Not only for economic reasons because fuel is currently the biggest expense for aviation companies, but also because of the increasingly strict emissions policies.”

So will we be flying in a Flying-V in 2040? “Airbus, Schiphol, KLM and other parties are already very enthusiastic. We’ll form a consortium next year, so that we can work more intensively on developing the design with all of these parties”, explains Vos. But the researcher is still erring on the side of caution. “There’s still so much that we don’t know about this aircraft; in another five years, we might even come to the conclusion that it’s not feasible after all.”