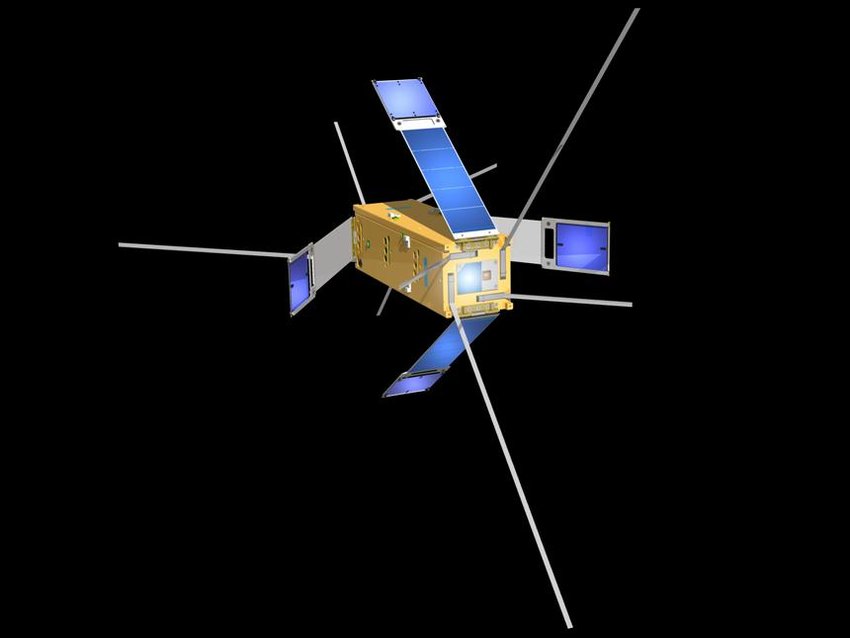 The Delfi space program is preparing to launch its third satellite, and TU Delft satellite technology may even go beyond the far side of the moon.

Unknown to many, the top of the high-rise EWI-building along the Mekelweg hosts a multi-band satellite ground station. It controls Delfi‑C3, the very first satellite to be launched by a Dutch university. “It’s a 3-unit CubeSat, launched in 2009, and still operational,” says Stefano Speretta, researcher at the Space Systems Engineering group at TU Delft. Delfi-C3 is a so-called unguided space object, meaning that it cannot be manoeuvred into a different orbit after launching. “Unguided satellites are often used for demonstrating new technology,” Speretta explains, “but also for many other advanced purposes, such as earth observation and measuring space weather.”

Lost in space
Delfi-C3 was a university-wide effort, for technology demonstration and for hands-on education of students in space engineering, mechanical engineering and electronics engineering. A second student-built unguided satellite, Delfi-n3Xt (pronounced ‘Delfi-next’), was launched by TU Delft in 2013. “This project was also a success,” says Speretta, “but we lost contact with the satellite after three months of operation in space. Its position is still being tracked though, by space agencies and commercial parties using high-power radar and on the ground lasers. They will warn other parties of any pending collisions between space objects.” Because of atmospheric drag, both TU Delft satellites will continually experience orbital decay, eventually burning in earth atmosphere.

PocketQube
Soon, an even smaller TU Delft satellite will be launched into space. Delfi-PQ is a so-called PocketQube satellite, also consisting of three units and weighing only 600 grams. The project is managed by Alessandra Menicucci of the same TU Delft group. Again, students have been involved, for example in designing the attitude control system for determining the celestial orientation of the satellite. 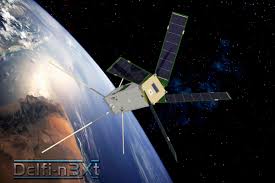 Limited power
Even though the Delfi satellites are small, they contain multiple instruments. “The outer structure, what we call the bus, provides power, communication and attitude control,” Speretta explains. “The instruments, consisting of 5 cm by 5 cm electronics boards for Delfi-PQ, are bolted onto the inside of the bus. Because of its limited size, the solar panels glued to the exterior of the satellite will not be able to provide sufficient power for it to function for the whole orbit. For a certain amount of time, the structure will service one of these instruments or maintain a certain orientation.”

Laser reflector
Final configuration of the Delfi-PQ will remain open until its assembly just before launch. The team may decide to add a laser reflector and a radar reflector to the outer shell of Delfi-PQ to increase its visibility for positional tracking. “It’s a topic of debate whether such small satellites are even visible to radar and on-the-ground lasers,” says Speretta. “It would allow us to compare the cross-section and position of our satellite with and without reflectors, as measured by various tracking services.”

Moon-shot
The next step for TU Delft space technology could well be the moon. “We won a competition, organized by the European Space Agency, focused on CubeSats for lunar exploration,” says Speretta. The LUMIO project (Lunar Meteoroid Impacts Observer) is a collaboration between universities and companies from Italy, the Netherlands, Switzerland, Norway and the United States. “The satellite will observe the far side of the moon for one year and detect light flashes produced by meteoroid impacts. The scientific goal of the mission is to validate and improve on existing models characterizing the meteoroid population orbiting close to earth,” Speretta explains. “This information is also very valuable in view of human or robotic exploration of the moon.”

Under consideration
The project is coordinated by Politecnico di Milano. “They will do orbit design and develop the main scientific instrument,” Speretta says. “At TU Delft, we are in charge of key satellite systems such as propulsion, structure, communications, safety and autonomy. Angelo Cervone, from our group, coordinates these efforts.” The European Space Agency, in collaboration with the national delegations of the involved member states, is currently evaluating the options for funding the next mission preparation phases. The launch costs to bring the proposed satellite, weighing approximately 20 kg, into lunar orbit are in the order of 20 million British pounds. “We can’t afford it ourselves.” 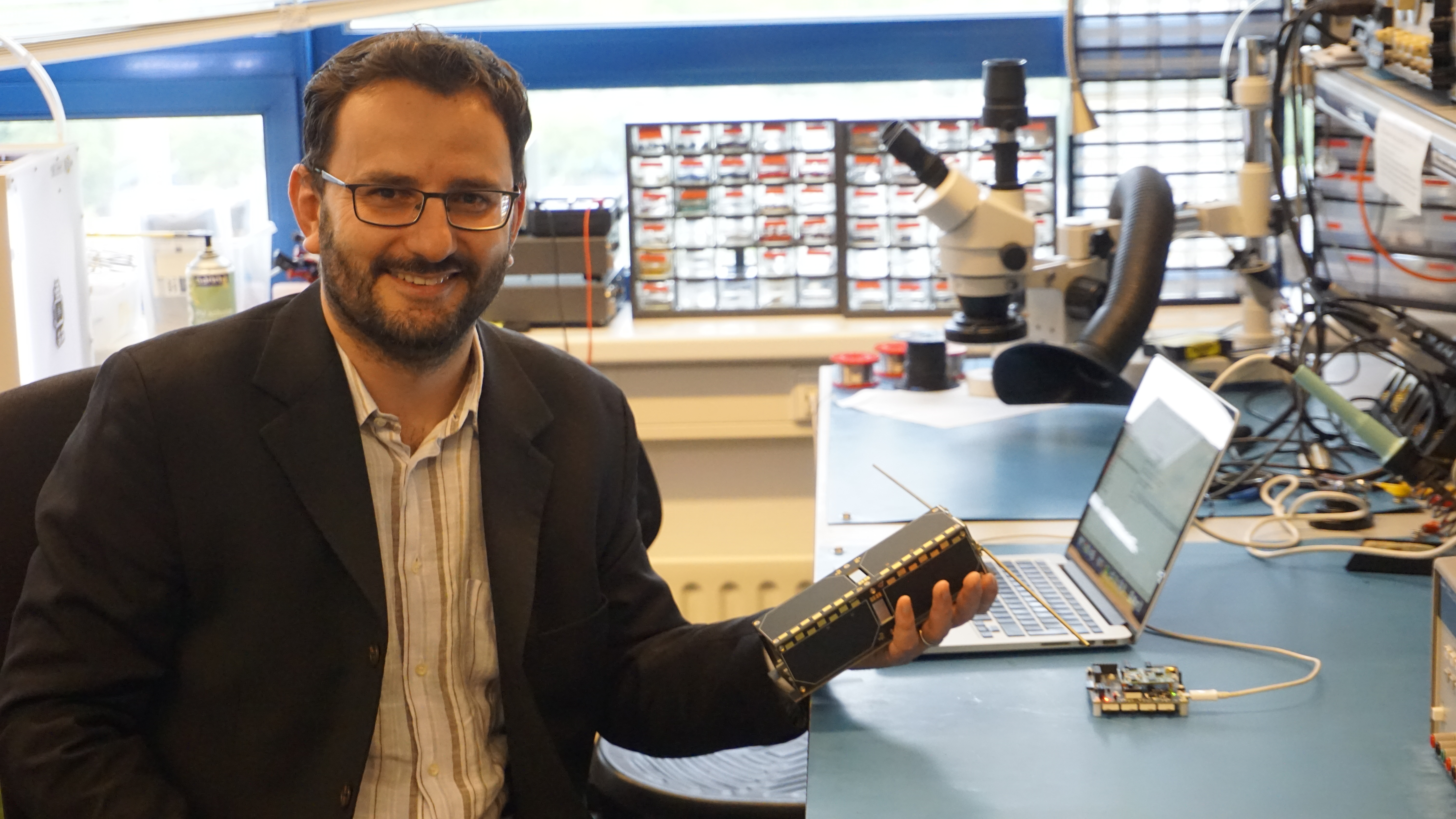 Autonomous operation
If funded, a lunar orbiter will deploy LUMIO and multiple other satellites in a circular orbit around the moon. The satellite will then have to manoeuvre to a location sixty thousand kilometres behind the moon where, around a so-called Lagrangian-point, it will maintain its relative position with respect to the moon. Speretta explains that “most communications will go through the lunar orbiter circling the moon, which can’t serve that many satellites at the same time. LUMIO will therefore have to determine the position of the moon, the earth and the stars and then calculate when to turn on its thrusters, all by itself. It is autonomy driven, the next frontier for small satellites.”

Here you can read more about the Delfi Space Program. The page also hosts a clock indicating the Delfi-C3 operational time.

Here you can read about autonomous operations for lunar exploration with LUMIO, a paper for which the group and collaborators received a ‘best paper’ award at the 2018 SpaceOps conference.