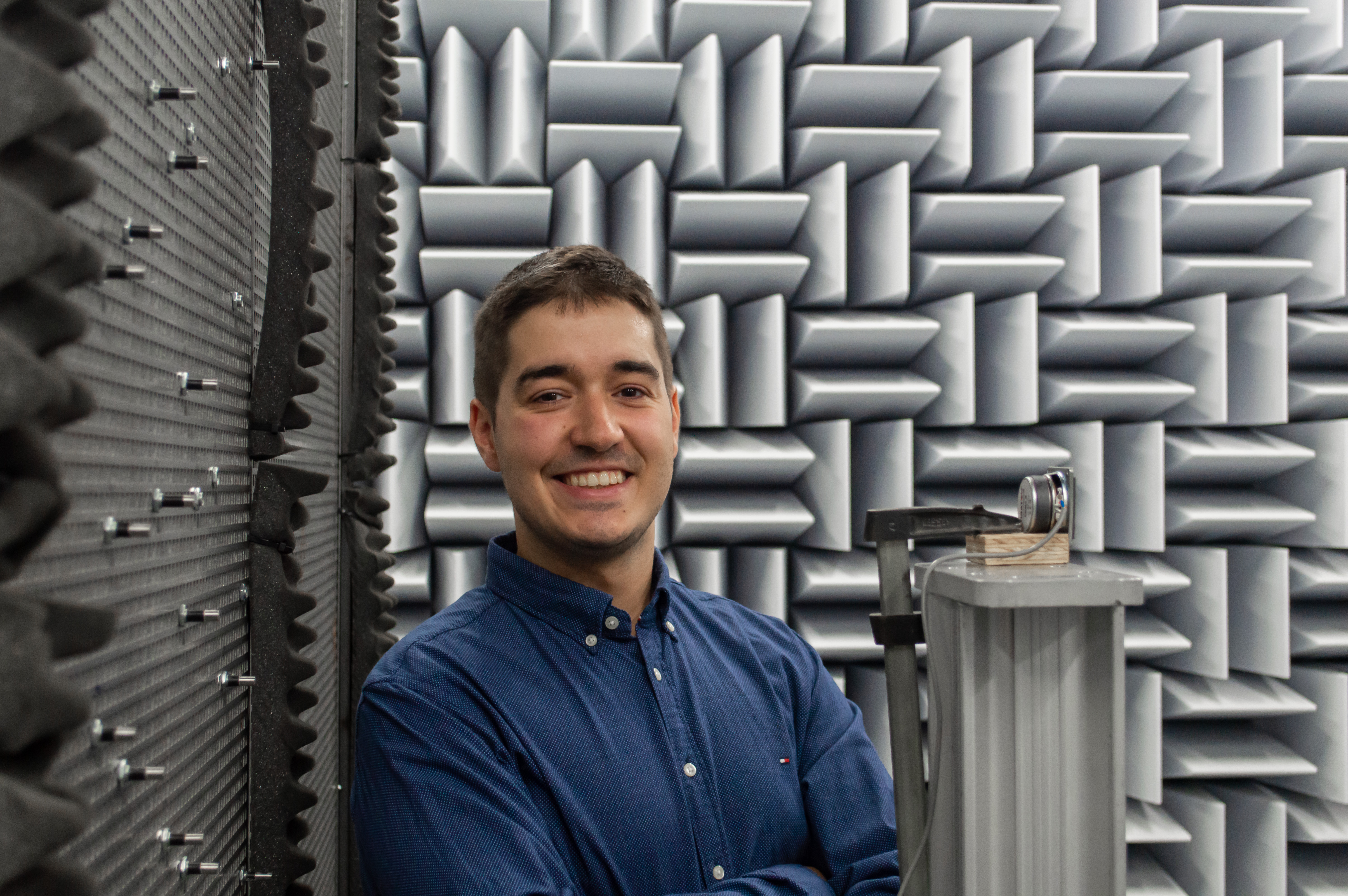 Although aircraft engine noise has been reduced substantially over the past decades, the continuous growth in air traffic still puts the hundreds of millions of people living near airports at an increased risk for hearing problems and cardiovascular disease. Presently, during landing, it is the airplane structure itself that is becoming the dominant source of noise. Improvements in acoustic imaging and its algorithms will help determine the next major sources of noise that need to be addressed.

A single microphone suffices to measure a general noise level. Using two microphones, some directionality can already be obtained – where is the noise roughly coming from? Having two ears, humans also have this capability. “But to really understand aircraft noise, to make a high-resolution image of all its sound sources, you need to use a microphone array,” Merino-Martinez explains. Such an array consists of a base structure holding many microphones, positioned at smaller and larger distances with respect to each other. The sound waves produced by a noise source will reach each microphone with a slightly different delay. Using a computer algorithm, the characteristics of the various noise sources can be reproduced – frequency, strength and location. “Such arrays started to be used for measuring aircraft flyovers in the 1990s,” Merino-Martinez explains. “Nowadays, they are also being incorporated into many wind tunnels.”

During the first half of his PhD, Merino-Martinez focussed on flyover measurements at Schiphol airport, using an array holding 32 microphones. After correcting for airplane motion, the Doppler effect and background noise, he was surprised to find that many types of planes produced a huge tonal peak at a frequency of 1720 Hz. That is a sound about as annoying as a heart monitor flatlining. “It was especially loud for the Airbus A320, one of the most popular passenger aircraft of all time,” Merino-Martinez says. “It turned out to be caused by a cavity in the nose landing gear, acting like a whistle. It is my most cited research paper to date, and I believe Airbus may fix this in their newer models.”

Imaging a line of sound

Most of Merino-Martinez’s effort, however, went into integrating a versatile microphone array into the existing TU Delft laminar flow wind tunnel. “The solution we came up with allows for the microphones to be rearranged depending on the details of the experiment,” he says. “Sometimes you want to move them farther apart for a higher resolution image, or closer together to improve the array’s frequency response.” He also spent a lot of time improving the algorithm for reconstructing the sound sources. “I wanted to accurately measure the sound levels created by airfoils, such as the wings of an airplane or the blades of a wind turbine. A lot of noise can be created by instabilities in the airflow at the trailing edge. In wind turbines, this mechanism causes the typical swooshing sound.” Whereas most acoustic imaging methods only consider point sources, as their mathematical formulation is easier, Merino-Martinez rewrote the algorithm to be able to accurately image such line sources. “We came up with a solution that improves on existing methods, including those developed by NASA.”

No silent planes yet

Using the new array and algorithm, Merino-Martinez and his colleagues performed measurements on variations of two noise-reduction techniques. “They are both inspired by the silent flight of owls,” he says. “Their feathers create a saw-tooth profile, called serrations, which interferes with the scattering of the airflow at the trailing edge.” The researchers also investigated the insertion of porous materials or metal foams at the trailing edge, causing a similar interference. “It’s a great solution from a scientific point of view,” he says, “but real-world application is difficult as these materials can get dirty or attract lightning.” Whereas serrations are already being commercially used by some wind turbine manufacturers, it may take another ten years for the conservative airplane industry to follow suit. “Safety first.”

Living relatively close to Rotterdam Airport himself, it may not only be Merino-Martinez’s professional interest driving his research. As a three-year postdoctoral researcher at TU Delft, he is presently researching the annoyance level of sound. “It’s not just sound volume that is important,” he says. “Duration plays a role as well, and high-pitched tones are especially annoying to the human ear. There are models that translate soundscapes into a single number representing their psychoacoustic annoyance level. I would like to validate these models by doing a survey with actual people, exposing them to different sounds inside a noise simulator.” Using such data, it may guide aircraft and wind turbine developers towards solutions that cause a shift in sound frequency, rather than a reduction in sound volume.