Flying with 65% lower CO2 emissions than the current generation of Boeings? And even 80% lower NOx emissions? This is possible, and Arvind Gangoli Rao, Associate Professor of Propulsion & Power, and his team have proved it. A scaled model of their futuristic low-emission aircraft can be seen in the office of the Dean of Aerospace Engineering, Prof. Henri Werij. 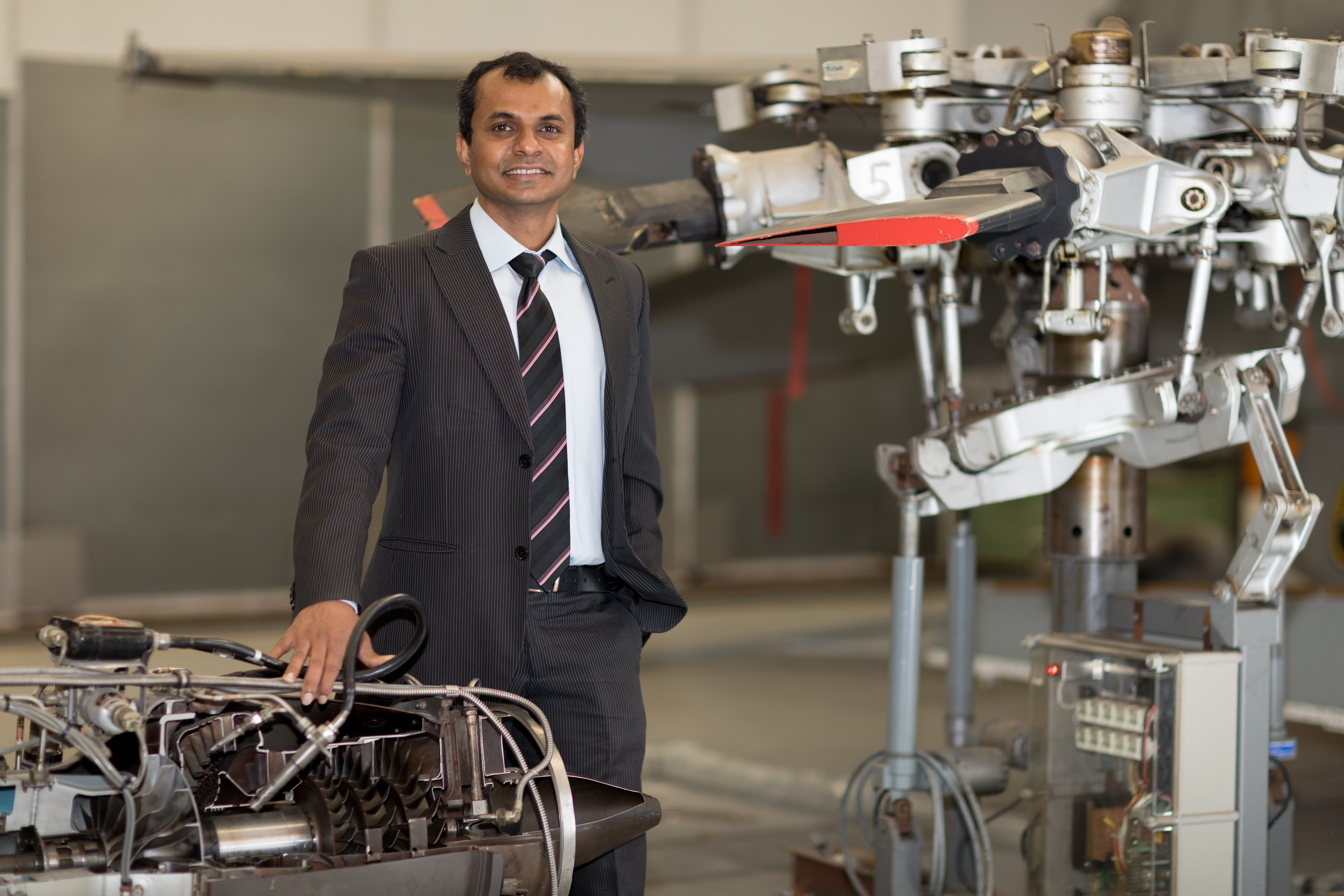 How can we make aviation greener? This is the central question that drives the research conducted by Gangoli Rao and his team of PhD and Master's students into new types of engines, fuel and aircraft that produce fewer emissions. “It's imperative. The Earth may not need us, but we do need the Earth. Just think about it: millions of species came before us and have gone extinct, and we are just one of the species. But today we are exploiting the Earth. Take for example the Easter Island, destroyed by humans who completely exhausted its natural resources. It's possible to escape from an island, but not from the Earth.”

By developing clean propulsion technologies, Gangoli Rao hopes to make a small contribution to improving the climate. Born in India, he completed his Bachelor's (Mechanical Engineering), Master's and PhD studies (in Aerospace Propulsion) at the Indian Institute of Technology in Bombay and worked on jet engines as a Postdoctoral Fellow at the Technion in Haifa. “As a child, I was fascinated by cars, motorbikes and aircraft. I gradually became more interested in aircraft engines, which represent the essence of flying. I always say jokingly: the whole point of an aircraft is to carry the engines. What appeals to me most is that this is the pinnacle of technology. We are attempting to push the boundaries of what we know and are capable of achieving. It's an enormous challenge and I love it!”

At TU Delft, Gangoli Rao is working with pleasure and passion on ways of improving the sustainability of the aviation sector. One of his projects is AHEAD, which stands for Advanced Hybrid Engines for Aircraft Development. It involves a pioneering aircraft design offering an unprecedented level of sustainability. A scale model makes it clear: the futuristic aircraft looks like a flying saucer, with a bulbous nose and two short wings that extend into two long narrow wings with a kink at the end. The engines are at the back of the aircraft and are hybrid: they run on biofuel and liquid natural gas (LNG).

A substantial reduction in aviation emissions has been proved to be possible.

“Thanks to the aerodynamic construction, the aircraft also has less air resistance, making it especially energy-efficient. We have shown that we can reduce CO2 emissions by half and NOx emissions by three quarters compared to conventional flying. This means that a substantial reduction in aviation emissions is possible. The ball is now in the industry's court and that's a question of time and money.”

The theme of sustainability lies at the heart of the courses that the associate professor teaches: Aero Engine Technology and Combustion for Propulsion and Power Systems. “I lace the engineering aspects with a global warming background. For example, I explain that the target from the Paris climate conference (COP21) to limit global warming to 2 degrees is no longer feasible. And that it is the non-polluting countries, such as those in Africa, that will actually suffer the consequences. I tell students that the 21st century will be about survival of the richest. Take rising sea levels: rich countries such as the Netherlands can arm themselves against it, but poor countries like the Maldives cannot. They will soon be engulfed by the sea. In politics, people often make unfounded claims about climate change. Education is the only remedy against this.”

Acquiring knowledge is an important motivation for Gangoli Rao. “When I completed my Bachelor's I thought I knew a lot. But as I continued to study, I began to realise: the more I know, the more I don't know. The great thing about being an academic is that you are always learning new things. In that respect, a great source of inspiration for me was Dr Abdul Kalam, a former Indian president. He was also a brilliant scientist, but he still remained a very humble man.” Gangoli Rao is also motivated by climate issues. “Even if we stop all emissions today, the warming process will continue for another couple of decades due to the inertia in the system. For the human mind, with its short-term programming, that's hard to fathom. The good news is that increasing numbers of students are opting for green degree programmes. That offers us a glimmer of hope.”