The supersonic and transonic wind tunnel TST-27 is a blowdown wind tunnel with a test section 280 mm wide, of a height varying from 250 mm to 270 mm depending on the Mach number. Test Mach numbers range from 0.5 to 0.85 (subsonic) and from 1.15 to 4.2 (supersonic). Supersonic Mach numbers are set by means of a continuously variable throat and flexible upper and lower nozzle walls; the Mach number may be varied during a run. Subsonic Mach numbers are controlled using a variable choke section in the outlet diffuser. Small deviations of the Mach number during a run are corrected by automatic fine adjustment of the choke. Downstream of the nozzle and supersonic test section the wind tunnel consists of a number of separate modules, supported on wheels and connected by quick-lock couplings. This allows to use the wind tunnel in several configurations. For transonic tests, a transonic test section with either slotted or perforated walls may be inserted downstream of the closed-wall test section. Either of two different model carts may be used, one of which is equipped with an angle of incidence mechanism for sting-mounted models, and the second with a mechanism for traversing probes in three directions through the flow field. The comparatively long running time of the wind tunnel (up to 300 secs) allows to explore in detail the flow field over a model. The wind tunnel has been designed for operation at high stagnation pressures; the maximum unit Reynolds number varies from 38 million per meter in the transonic range to 130 million per meter at Mach = 4. 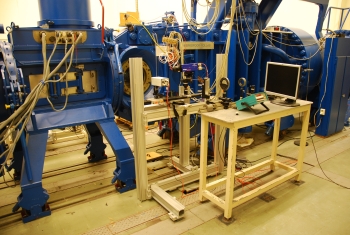 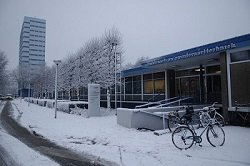