You will learn how to engineer complex space vehicles: launchers, satellites and deep space probes, as well as their subsystems, instruments and components using a systematic approach. You will gain expertise on every phase of a spacecraft system development including design, development, integration, verification/testing and operation. You will also learn about management aspects of engineering including scheduling and planning, and about working in multi-disciplinary design teams to formulate spacecraft system solutions. This will enable you to apply your gained knowledge also to other complex technical systems outside of aerospace engineering. Students do their specialised thesis work in one of three areas: spacecraft engineering, space systems and space propulsion.

Spacecraft Engineering
This area deals with the design, development, construction, testing, and operation (end-to-end engineering) of space vehicles: launchers, satellites, etc. operating around Earth and other planetary bodies as well as in outer space. It addresses the engineering of the spacecraft subsystems in relation to the overall spacecraft and its life cycle. The emphasis is on miniaturisation and spin-in of commercial technology into space systems for increased performance or cost reduction. Examples of research projects are the following:

Space Systems
The field of space systems focuses on the architectural development of complete space systems (including launcher selection, ground control, orbits and constellations, payloads, mission operations, etc.) needed to get a job done. Of special interest is the category of distributed systems, i.e. space systems that involve multiple spacecraft, which together enable high-performance mission objectives. Examples are global coverage for communication or navigation or innovative missions, for example using long and flexible baselines to allow multipoint sensing. The formation flying of two DelFFI cubesats is a typical example of a research project in this field. Some other research projects are:

Space Propulsion
Space propulsion/rocket systems constitute a critical enabling technology for most space missions. Research projects in this field encompass the engineering of extremely miniaturised and highly integrated propulsion systems, as well as the engineering of advanced rocket stages and the associated rocket propulsion systems. Projects are typically embedded in (inter)national research activities. The research facilities include a vacuum chamber and a number of small thrust benches. Examples of research projects are the following: 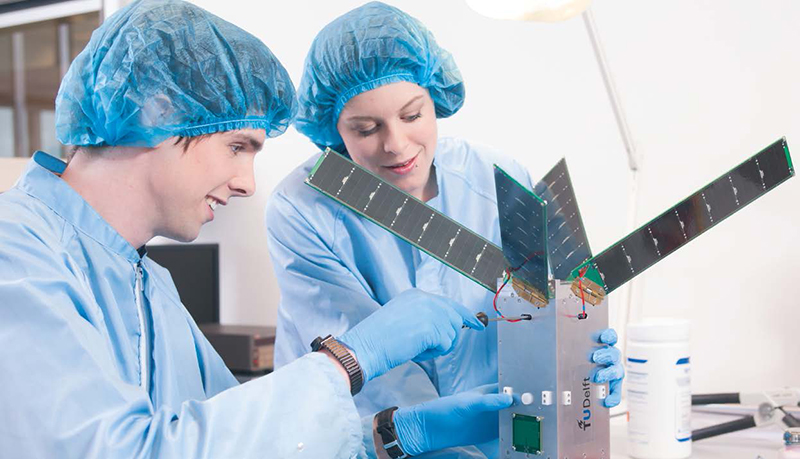