Professor of Planetary Exploration at Aerospace Engineering (0.7) and Civil Engineering and Geosciences (0.1) at TU Delft and senior researcher at the Royal Netherlands Institute for Sea Research (NIOZ) on Texel (0.2), focusing on sea-level research.

‘I have a long-term LAT relationship with my girlfriend Esther. We do not have any children and mainly see each other at the weekends. That suits us just fine, because my girlfriend also has two difficult jobs: at a ministry in The Hague and in the judiciary. With three interesting jobs, I do not have a great deal of spare time.'

‘I love walking and cycling, both while on holiday and at home. I try to spend at least half an hour walking every day. I am really lucky to be on Texel so often, where I can enjoy great walks by the sea. For work and relaxation, I also read a lot of science-fiction books and enjoy watching sci-fi films, specifically those made in the period before 1957, when the first Sputnik was launched into space. I like the fact that science-fiction was still purely speculative then, but based on scientific principles. After that, space travel lost its virginity. Another important factor is that the golden age of science fiction in the United States happened between the end of the 1930s and the end of the 1940s. Everything you see in sci-fi films and read in sci-fi books was thought up during that period. After 1950 virtually no new themes were discovered in science-fiction.’

‘In March 2010, I had the honour of sailing on the clipper Stad Amsterdam for a TV programme recreating Darwin’s voyage in the Beagle. We sailed from Perth to Mauritius, where I took GPS readings to determine the absolute height of sea level and the impact of gravity on it. It was an especially interesting mission, assisted remotely by colleagues in Delft. One of the most important conclusions was that with all the peaks and troughs on the Indian Ocean, the difference in sea level can be as much as 100 m. The footage was broadcast in episode 30, entitled Palm Trees on Antarctica.’

‘The sheer scope and diversity of the research. I do so many great things! When there are setbacks – a disappointing theory, for example – I can switch subjects, which can surprisingly have a positive effect on the  subject where I encountered problems. In Delft, I can work on planetary research in an academic environment. But I also have my workspace on Texel, with a view over the harbour, where I conduct research into the sea level, deemed to be of immense economic importance. The variety really appeals to me. As Professor of Planetary Exploration, my specialist area is in any case enormously broad in scope. Almost every modern science plays a role in it, from geosciences, chemistry and biology to astronomy and, of course, space vehicles – which is what AE is ultimately all about. All of these different sciences together make my chair extremely fascinating. I also love to supervise students. My students work all over the world and serve as my ambassadors. They work on instruments for all kinds of planetary missions and excel at it. This gives me a great deal of personal satisfaction and also results in some valuable contacts at other institutes.’

‘The chair itself. There is so much still to discover! For me, it started with one of the greatest successes in planetary exploration: the landing in January 2005 of the Huygens probe on one of Saturn's moons, part of the Cassini-Huygens mission that is conducting a study of Saturn and its moons. The soft landing achieved by this probe, at 180 degrees below zero and in strong winds, was partly made possible by Dutch engineers. But in those days, there was nowhere you could study planetary exploration. This is why I joined forces with Imke de Pater to establish teaching and research in this area. Since then, planetary exploration has really taken off. It is one of the faculty's research priorities for 2012-2015 and we built up an expert team of four people in almost no time at all. In addition, the European Space Agency decided in 2011 to send its first L-class mission to the icy moons of Jupiter, which fits in perfectly with my own line of research into icy moons. Planetary exploration is still relatively new for the Netherlands. But expectations are running high. Currently, we are still virtually 100% science-driven, but if we manage to source minerals and energy from space in the future, it will become economically interesting. I predict a prosperous future for planetary exploration.’

‘I am originally a physicist and astronomer and obtained my PhD in geophysics. That means I am not an engineer, and never expected to end up at a university of technology. After my doctorate, I worked abroad for six years: in Stuttgart, Bologna and Milan. In 1998, I heard on the grapevine that the Astrodynamics and  Satellite Systems research group in Delft was looking for a geophysicist able to work with satellite data. It appealed to me, for a couple of years, after which I planned to go elsewhere. But I liked Delft, and the feeling was mutual, so I have now been here for 15 years. Assistant and associate professorships were followed by a chair in planetary research, with amazing opportunities for teaching and research.’

‘If I have to single something out about myself: my broad range of interests. I am open to developments in other specialist areas and see them more as a benefit than as a threat to my chair. Young people often think like that too, so I like working with them. I am also a worldwide expert in a number of different fields, but also dare to be a generalist. That is essential for planetary research, which is such a wide field. It is important not to want to do everything yourself and to give your staff some freedom.’

‘If you want to do everything well, you always bite off much more than you can chew. This answer always makes me laugh, because it relates to an anecdote. When I was appointed in Delft in 1999, I had to undergo an assessment. I was asked this very same question as part of it. At that time, a colleague advised me never to cite a really negative characteristic in response, but a 'disadvantage' that actually proves to be an advantage for the employer, such as: I work too hard. When I gave that answer, the assessor saw through me straight away of course! But my weakness is that I want to be too much of a generalist, take on too much and say yes too often.’

‘Space travel! Fortunately, the days when Minister Zalm was writing off space travel as 'expensive fireworks' are long gone. I have no complaints about interest in planetary exploration now. Whenever there is a landing in space, it features in all the news bulletins, even if there is a lot of other news in the world. But there is still a lack of awareness of how important space travel is for our everyday life. Space travel technology is extremely important for such areas as communications, the weather, air traffic and safety, but also for the economy. Countless businesses are active in the space travel sector. Other areas that deserve to be higher on the political agenda are research and education at all levels. Lots of the world's problems could be reduced if there was good education everywhere.’

‘Nature, both in space and time. I have a wide perspective on nature: there is so much of interest to discover! For example, I am studying a phenomenon on an icy moon which involves several stripes that you can see around the south pole. No one knows what it is. By chance, we are working at NIOZ with oscillating tanks to distinguish patterns in water. Guess what? The patterns correspond exactly to what you can see on the icy moon. The interesting thing about this is that the patterns in the water appear to attract things floating in it – something never before seen in nature. This means that something we observe on a distant moon can be of economic interest on earth for the fishing industry or extracting minerals. This is another reflection of my enthusiasm for breadth and the interaction of various areas of science.’

‘Try to look beyond barriers. By that, I do not mean out-of-the-box thinking, because that often involves people wading into neighbouring areas of expertise with little understanding. What I mean is seeking out colleagues and working together with them. Trying to create synergy. As for young people, I would say: learn a subject or trade, try to explore it deeply, but keep looking around you, beyond the barriers.’ 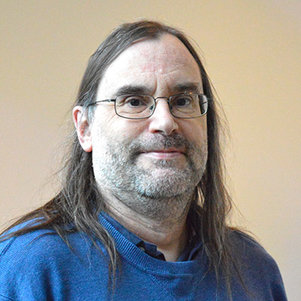