Private life?
‘I grew up in Udenhout, not far from Tilburg, studied and received my PhD from Maastricht University, and have lived in Rome and Lausanne. I came to Delft after receiving my PhD. My wife, Bénédicte, and I have three children: two sons aged 9 and 4 and a daughter aged 7.’

What is your favourite hobby?
‘I enjoy running and like to read literature, especially ones written by foreign authors: French and Italian and sometimes English. I also like football; I still play but mostly it’s about watching the games.’

Your career in brief?
‘I studied artificial intelligence (AI) at Maastricht University. I worked on my thesis about evolutionary robotics at the CNR in Rome. Once back in Maastricht, I received by PhD having written my dissertation on how computers, like humans, can use eye movements to see in an efficient way. Later, during my research activities at the EPFL in Lausanne, I came into contact with flying robots, also known as micro air vehicles. Absolutely fascinating! Then I also heard about the 16-gram DelFly that the Micro Air Vehicle Laboratory (MAVLab) in Delft had developed and was very pleased in 2008 to join the team for what would be the next three years. After spending a short time as a lecturer in AI in Nijmegen and then two years as a research fellow at the ESA Advanced Concepts Team, I accepted the position of Assistant Professor at the TU Delft in 2013 and was promoted to Full Professor last April.’

Career highpoint?
‘Having the DelFly, a drone that flies by flapping, fly autonomously in 2013. This was special for two reasons: because the DelFly had all the processing power and sensors on board, and because of the close cooperation I enjoyed with my fellow researchers. Another great moment was during a research project in which we used the DelFly Nimble, created by our post doc, in order to study the highly agile escape maneuvers of fruit flies. This research, performed together with a biologist from Wageningen University, also resulted in acquiring new insights into fruit flies. Our findings were published in Science, and we were even on the cover of that issue.

But the real highpoint of my career has to be the theory I developed about how insects (and also drones) can determine distances. That’s something I’m very proud of. This theory is based on the idea that a drone or insect such as a bee has to move toward a condition of instability in order to determine distance, while engineers try their very best to avoid the instability of robotic systems. When studying bees and bumblebees, you notice that they are continually vibrating and oscillating. According to my theory, they do this in order to determine distances. Not only is this theory useful for developing drones but it also offers a new way of looking at what insects do. I’m currently working with biologists in an attempt to verify my theory.’

Your greatest challenge at the moment?
‘Now, during the corona crisis, this would be teaching my children at home because it means having had much less time for work. In the same time, all the subjects I teach - including some new ones - are scheduled for this period. In addition, we had to transform all teaching and examination into an online form. What a challenge! But it also led to some great new ideas. For one thing, we’re already saying that some things that we’ve put online should be offered online next year, even though we could be returning to regular classroom teaching by then.

As a Full Professor, I would also like to work on bridging the gap in the achievements demonstrated by flying animals and those of drones. To do this, we are focusing on a new bio-inspired approach to AI as well as efficient control technologies and even better designs for wing- flapping drones.’

Most enjoyable aspect of work?
‘Working with young people. The content involved in my research activities is also extremely interesting as well as the freedom to approach it as you want. But what makes it really wonderful is to do this together with young people. On the one hand, you’re teaching them; on the other hand, they keep you young as they have open minds. They’re always coming up with new ideas and points of view, and that keeps you on your toes.’

Why Delft?
‘I was attracted to Delft because of my interest in the DelFly that the MAVLab was developing. My dream was to create a completely autonomous drone: a huge challenge for AI. But what also appealed to me at Delft was the doer mentality. Many people here don’t just have an idea; they actually go about working on it. And that applies not just to the researchers but the students as well. What they’re achieving is absolutely unbelievable. Sometimes with supervision but also all on their own. They display initiative, organise things themselves, and are active and creative: simply great. This attitude has enormous appeal for me. That’s why we get such fantastic things done by working together!’

Best character trait?
‘Creativity: time after time looking at problems in an unusual way in order to come up with novel solutions.’

Worst character trait?
‘I have a hard time saying no. That’s because so many things interest me and I’ll say yes because something still looks far away. Afterward, however, I regret it because it’s humanly impossible to do it all.’

Key issues on the political agenda?
‘That has to be the environmental issues. The corona virus is a big problem now, but it’s only temporary in nature. The environment is the ultimate challenge for our generation, and maybe still for the next generation. We’ll have to work really hard on environmental issues, especially because they’re such huge multifaceted problems. This problem – and many other problems of our time – require international cooperation on, first, a European level, and on a global level.’

Source of inspiration?
‘The natural world. This began when I was just eight years old when I became absolutely fascinated with ants. To see how they took honey to their nest, I put a big dollop of honey out in the garden. Unfortunately, the ants drowned in it one by one. This saddened me so much that my career as a biologist was short-lived. Even so, my interest in small animals has always stayed with me. When I was studying AI, Professor Eric Postma taught a subject called Embodied Cognitive Science: how intelligence isn’t just something in your brain but also involves your body and your environment. This was what inspired me to do the work I’m doing now.’

Personal philosophy?
‘I want to engage in scientific work that will contribute to humanity. After all, science supersedes the individual. Naturally, drones are subject to much discussion. My personal goal is thus to explain that we can achieve many positive things with drones. Things like using swarms of small drones to look for and rescue people or to monitor crops in greenhouses. But I also want to enjoy life: after all, you only go around once. That’s why I make as much time as I can for my friends and family.’ 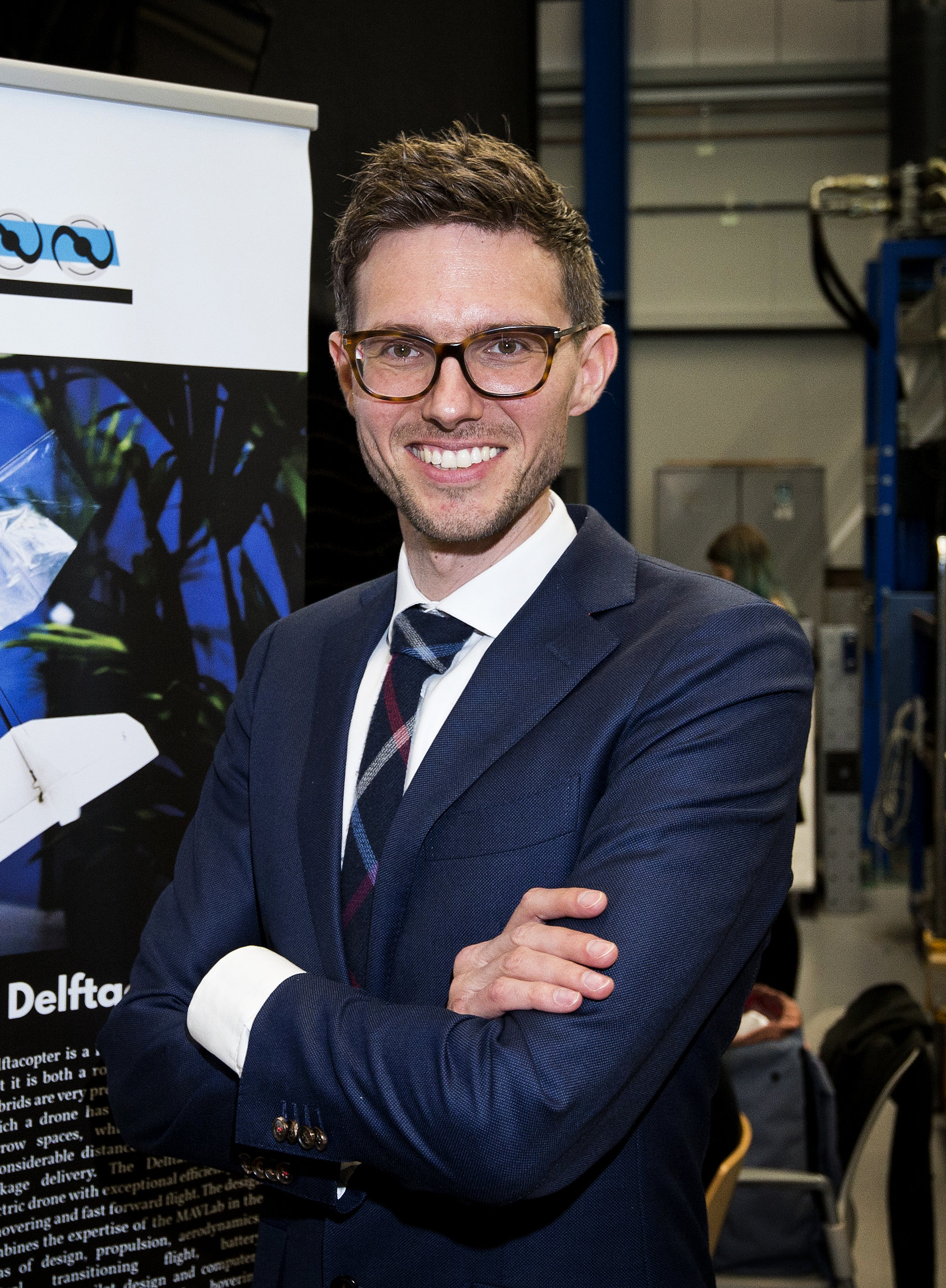