'I was born in Leeuwarden. I am married to Jet, who teaches English at a secondary school. Next year we will be celebrating our 25th wedding anniversary. We have three sons of 12, 14 and 19. I have always been interested in aviation, although when I was a teenager, I changed my mind quite often: every year I had a different idea for my future profession. The nice thing about Aerospace Engineering is that it combines many other areas which fascinate me: for instance maths, astronomy, physics and programming. When I studied I was lucky enough to benefit from a grant system in my family dating from the Middle Ages. I am proud of my Frisian roots, although I identify more with being European. I am a big fan of Europe.'

'I like all sports that involve water - either in frozen or liquid form. I enjoy sailing, skiing and skating. I love being outdoors when I'm not working. We live near the dunes and the beach, so that's where you'll often find me - walking, swimming, biking, running and taking photos. Apart from that I enjoy reading literature, listening to music and also programming, especially recreational mathematics - solving complex mathematical puzzles and making simulations. I go on holiday to France several times a year; I like the country and its culture very much. I also often listen to French radio stations - the discussions there are much more in-depth, and involve experts rather than average persons, compared to the Dutch radio.

'The period I spent working for NASA at NLR on the Free Flight Project. We were looking at whether it would be possible to have the pilots taking over the separation task from air traffic controllers in the en-route phase of the flight. That project had it all: an interesting, challenging mathematical problem, many complex simulations and plenty of experiments using the flight simulator. It turned into a textbook example of a project that had a completely different outcome from what we were expecting. We thought that the pilot/traffic controller combination would only be possible in quiet, low-traffic density  areas, but to our surprise we found it even worked in scenarios which were too busy for conventional air traffic control. These findings had an enormous impact - and made us instantly famous. We were asked to advise the governments, won awards, and found ourselves also in the media spotlight. A unique experience! A second highlight was the move I made to TU Delft. Before that I had carried out research at the NLR for 16 years, largely involving flight simulators. An enjoyable and instructive period - a boyhood dream. I was often involved in science communication, and I'd always felt an affinity for education. I'm very happy that that is one aspect of my work at TU Delft.'

'I am always curious to discover new things and I enjoy explaining them. I can now combine these two things in my work. Teaching a lecture room full of students is great, but I also enjoy being a solitary 'nerd' and solving complex problems. I would not be able to choose between these two very different activities. In my lectures my aim is always to also awaken the students' curiosity to motivate them. I tell them about my fascination and ask them questions in many different ways to make them curious as well. This creative side of developing and always improving the  storyline for the teaching also makes it really interesting.

'Developing the new Chair of CNS/ATM here at AE. I am starting from scratch; there isn't a ready-made group. I have the honour of  'shaping' and developing the chair. Another challenge is the MOOC (Massive Open Online Course) 'Introduction to Aeronautical Engineering', which starts on 3 March. Wherever they are in the world, the MOOC gives everyone free access to TU Delft teaching, also the ones that cannot afford to come to Delft. I’m really motivated by that idealistic aspect, and that's why I'm involved in on-line education. More than 10,000 students have registered already! It will be an exciting challenge to meet the expectations of these very diverse students. I just hope they won't all start e-mailing me! I'm also very curious to find out how the online lectures will be perceived, as I'm talking to a camera lens rather than a full lecture room, where you can interact with the audience.'

I studied here as an undergraduate, and although I then spent 16 years working at NLR in Amsterdam, I jumped at the chance when NLR asked me to consider a part-time professorship. TU Delft then also offered me the post of dean, which came as a great surprise. My love of education and the prospect of working with young, smart students persuaded me to accept the offer.

'That's not really for me to say, but I suspect it’s that it’s my enthusiasm for understanding and explaining things, which makes me a good teacher, at least that’s what I’m often told. Part of that is that you put yourself in the position of the student and look at the topic through his/her eyes. '

'I don't have a poker-face at all. My face usually gives away my feelings – and that is not always positive. For example I can become impatient when people beat around the bush too long, or invent excuses, or tell me something I've known for a long time. The combination of the impatience and the lack of a poker face doesn't always have the best effect.'

‘In the first place, the growing inequality in our country, for example as it is reflected in our educational system, among other things. The basic government study grant will be abolished next year, and at the same time there are discussions to differentiate and allow costly, prestigious degree programmes. Together with restricting the access, it's a policy that will create many victims in the future. It's a worrying situation, also caused by serious underinvestment in science and education in general. We need a more constructive and more positive vision for the future, instead of breaking down what was carefully built up in many decades. In general, a national vision to combine a number of strong Dutch assets such as infrastructure, a favourable geographic location in Europe, a highly qualified labour force and a very productive agricultural sector should form the basis instead of random cost-cutting. For example, why not expand the high-speed rail link all the way to Denmark instead of its current dead-end in Amsterdam! In short: improve investment in education, make it more accessible, and invest in an agenda based on a positive vision for the future!'

‘In my education, those are the professors who taught me when I was a student at Delft myself. They include Professor Van Ghesel Grothe, who was an inspiring lecturer; Professor Van Ingen, an excellent communicator of knowledge, who was interested in the human side of students, and Professor Bob Mulder for his infectious enthusiasm and talent for explaining things. They also include Walter Lewin, a Dutch professor at MIT, whom everyone knows for his amusing physics demos and stunts on television. But he is also a genius at stimulating people's curiosity and explaining things down to the smallest, basic level, which requires a thorough understanding.

'Only pursue your self-interest, if it also contributes to the greater common good - in everything you do. And in general: don't focus on the process too much, which postpones or even prevents achieving results – just do it!' 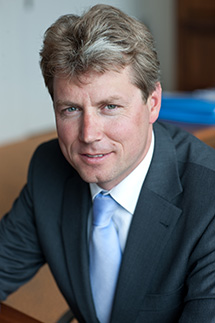