Professor of Flight Performance & Propulsion (FPP) at the Faculty of Aerospace Engineering.

“I was born in Twente in 1960 and now live in Pijnacker with my family. My wife Ansje works in the Youth Healthcare service, my 23-year-old daughter Lotte is studying Industrial Design Engineering at TU Delft and my son Bart, who is 21, is studying Industrial Product Design at The Hague University of applied Sciences. They inherited their creativity from me, as I have an inventive nature as well as being very practical. I have been responsible for all kinds of rebuilding projects! Even as a young boy I was fascinated by aircraft and space travel. I also love history, especially the Middle Ages and the Golden Age of the Netherlands and I gain real pleasure looking at works by the Old Masters. A visit to the Rijksmuseum is always packed with gems far as I am concerned.”

“Sport! I played volleyball for 22 years, in the first division. This was a great period, although very intensive, and I have now left it behind me. My favourites now are endurance sports such as mountain biking and road cycle racing. I aim to get in at least two rides each week and have also been a spinning instructor for 15 years. Sailing is also something I love to do, but I experience the ultimate happiness backpacking through the mountains, often together with my wife and children. Listening to music is also on my list, I love to listen to classical music, from the Baroque period in particular.”

“In 1979 I started out as a student in the Faculty of Aerospace Engineering. While taking my degree in the Aerodynamics group I worked here for over two years as a student teaching assistant. Immediately following my graduation I was appointed assistant professor of Aerodynamics, later followed by an appointment as associate professor and head of the Wind Tunnel laboratories. Meanwhile, in 2005, I obtained my PhD in Propellers and Propeller-Wing Interaction. I have held my present position as chair of Flight Performance and Propulsion (FPP) since 1 July 2013.”

“That I hadn't made any plans to obtain my doctorate, but that I did it anyway, gives me a good feeling. Another highlight was the period I spent running the faculty laboratories, a task which I really enjoyed. I am also always pleased to see that throughout the years, the extreme high quality of research and education here at TU Delft has remained a constant factor. In closing I would just like to mention a highlight from the sidelines: in 1998 Nando Timmer (Wind Energy) and I achieved enormous success with the zig-zag strips we developed for the suits of the Olympic skaters in Nagano. In the eyes of the world this was an extraordinary invention, but actually we had had the knowledge needed for this for some time. It led to an enormous media hype and we appeared on television and in all kinds of magazines. My name even featured on the cover of IQ magazine, alongside that of Donald Trump. I had never experienced anything like it!”

“The thing I enjoy most is coming up with an innovative idea, creating a model for it and then predicting the benefits of the idea, followed by tests to prove that it works. You can see an example of this in my PhD research from 2005. My idea was that if you create an integrated design for a propeller and wing and adapt the wing behind the propeller, you can achieve a vastly improved propulsive efficiency. The models confirmed this idea, as did the tests in the wind tunnel. Fantastic! Another great thing is that back then I predicted that one day we would be designing large propeller aircraft. Everyone laughed at me, but look and behold, it's happening right now...”

“I have become chair of a section with a great deal of history. It's a fantastic section, with tentacles reaching into all kinds of specialisations, many of which are in areas I have not been active in myself. The world in this chair is far wider than anything I experienced in all my years in the Aerodynamics group, so it is going to be a real challenge to provide good leadership across the full width of the FPP section.”

“I wanted to study something technical when I left secondary school. When I read about Aerospace Engineering in a brochure, I knew this was just what I was looking for. Ever since then I have felt a strong affinity for TU Delft. Our university has always enjoyed an excellent reputation. In particular our faculties receive high praise. So I don't see any reason for trying my luck elsewhere. And an added benefit of Delft is that the atmosphere is always good here.”

“I have pretty good communication skills. I give other people the chance to talk, so they feel comfortable with me. I think it is really important to accept people just as they are. When you're dealing with people, there is no absolute truth. Everyone has their own tale to tell, and that's what you have to work with. I can't stand people who immediately judge others.”

“I have a tendency to be impatient; once a plan has been made, I want to get into action right away. Some people say:  'we need to stop and think about this'. Then I can already see it's not going to happen, and I feel that's a shame.”

“The Knowledge and Innovation Agenda! The Knowledge Platform that Prime Minister Balkenende promised never really got off the ground. That has to change. The government needs to make far better use of the R&D opportunities afforded by the universities of technology. We also need more direct sponsoring. The current funding programmes by STW and NWO are far too cumbersome. All too often ideas are shot down. People get frustrated and then take their ideas elsewhere in Europe. So there is still much to be gained in the field of knowledge innovation.”

“I have a lot of admiration for Heinrich Harrer. This Austrian anthropologist spent seven years living with the Dalai Lama and wrote several interesting books, including Seven Years in Tibet. He was also the first person to climb the North Face of the Eiger, together with three colleagues. In his books he gives a good description of how to live your life, based on his anthropological ideas. I find books about travel and expeditions interesting in any case. As far as my work is concerned, I am surrounded by people I can get enthusiastic about. I would like to mention one in particular: my first supervisor at TU Delft, Professor Van Ingen. I admire his encouraging approach, for example during his lectures, how he treated people and the way he gave feedback.”

“Respect for others is vital, and that's something I always try to put into practice. I feel it is the best way to achieve results. A second life philosophy is based on the book Your Erroneous Zones, by Wayne Dyer. I think it is an interesting approach to life, to not be overly preoccupied with the future while at the same time not staying stuck in the past. There's no point crying over spilt milk, you can better invest your energy in the present. And finally, although this is more an attitude than a philosophy: my family is far and away the most important thing to me.  Even more than my work, no matter how important and interesting that may be.” 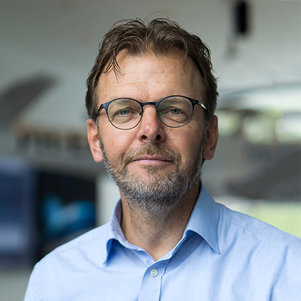