Professor / Holder of the Chair in Astrodynamics and Space Missions. Also: Full Member of the International Academy of Astronautics (IAA), Basic Sciences Section. Areas of expertise: precise orbit calculations of satellites and applications of satellite remote and Doppler measurements.

‘I am in a relationship. My partner, Marleen, lives in Noord Holland and has three children. I love sports and am generally pretty good at it, without being especially outstanding. I enjoy rollerblading, skating, and swimming, although I don't get as much of a chance to do these things as I would like. I do cycle a lot; at weekends, Marleen and I regularly go off on trips. I have been particularly fascinated by space travel since I was a boy. Just take the mirrors that were left on the Moon during the Apollo missions, for example, which enable us to measure exactly how far the Moon is moving away from Earth. And what about the intelligence and foresight of the people who thought of this back in the 1960s? Isn't that great?"

"Relaxing! I do that by being active - I go skiing every winter, for example - but also by going to the cinema. Obviously my favourites are typical science fiction films - I am a space traveller, after all! But I also like high-end special-effects films, such as the Lord of the Rings series. Apart from that, I follow the news very closely. I read various newspapers, especially at the weekend, and enjoy following political processes and their complexity, and of course the developments in the world."

"Gaining my PhD at TU Delft; it was a real day of celebration! At the same time, it also marked the end of the relatively free existence that you have as a PhD student. I still experience some of those golden moments, though, when the PhD students or regular students whom I have supervised achieve good results. Another high point was my year as a visiting scientist at the Center for Space Research in Austin (Texas, 1993). It was fantastic to get to see what goes on there! The culture there was totally different: academics are really pampered. The whole year I was there I didn't need to fill in a single form! There was bureaucracy, of course, but they made sure you were able to concentrate fully on your research work. That is totally different in the Netherlands, although the situation here has important benefits too. I was also able to build up an important international network in Texas, which is still very useful to me today!"

"Doing research is still far and away the most enjoyable aspect. I like sitting at my computer making software, retrieving satellite data and converting it into models. However, in my current coordinating role, there is less time for that. That is why, in the run-up to my appointment, I transferred all my research work to someone else, except for one project. I have also noticed that I enjoy coordinating projects, managing people, helping solve problems, and talking about how research should be carried out – especially when I see someone taking great strides as a result. What has not changed is my fascination for space travel technology. We can calculate the location, to a few centimetres, of a satellite thousands of kilometres away travelling at a speed of eight kilometres a second. It's absurd and incredible when you think about it!"

"Keeping our excellent research group, where I work with very skilled and experienced people, as balanced as possible. This is to ensure that we can make the best possible contribution to education and research. On top of that, there is the constant challenge of justifying our very right to existence. The world of space travel is considerably smaller than that of aviation, with just a few big players and many small companies. In Europe, for example, we are very much dependent on the ESA, our most important client when it comes to research. And in the Netherlands, we keep having to convince the government of the importance of space travel. The Netherlands still contributes relatively little to our sector, even though, as citizens, we benefit enormously from it - just think of the internet, navigation, weather forecasting, telephony, and television. The present government would like to invest more in space travel, but the next cabinet may take a very different line. We would actually benefit from some long-term security!"

"I wanted to study aircraft engineering, and Delft was the only place where you could do that in the 1980s. At that time, nobody really thought of studying abroad. I also considered applied physics, but I was swayed by the enthusiasm in the trial lectures at Aerospace Engineering.
However, I did do a number of optional physics modules, such as quantum mechanics and one on the relativity theory. After my year in Texas, I decided to return to the Netherlands, where I was able to take up a post-doc position at TU Delft. I was also missing my social life here too much to stay in America. I was then made an assistant professor and evolved naturally towards my current position. I really do feel very much at home here."

"Your best character trait is often your Achilles' heel as well. I'm actually a pleaser - I aim for harmony. However, I have learnt to suppress that tendency when necessary, because looking for a compromise can itself lead to conflict. I am also very organised, a meticulous planner. I always meet my deadlines, or let the other parties know if there's a chance that I won't My weakness is that I am a control freak and that I am too much of a micro manager. Apart from that, I am sometimes regarded as a chameleon: when I'm on a skiing holiday with friends it doesn't matter who I share with, you can put me in any room. It seems I am not someone who endlessly irritates people, and I can adjust to different kinds of company."

"As I said before - I am a pleaser and a control freak."

"Space travel, of course, but from a broader perspective: minimising overheads, and there is also too much micro-management. Money for research and education should be spent as efficiently as possible. Politicians try to achieve this through regulation, for example through visitation committees at universities. Leading universities in America simply say that they cannot be checked, because nobody knows better than they do. I don't want to be as arrogant as that, but we could certainly manage with fewer controls. Academics are often intrinsically motivated people. They are very keen to outperform others and make new discoveries; they do not really need motivating. I would also say this: stop the subsidy rigmarole that universities now have to deal with. Just give us money as an input investment, like in the past. Now, we have to fight for every euro by submitting research proposals. If you consider that just one in ten proposals is honoured, it is clear that a great deal of very valuable time is lost in the process - time that would be better spent on research work itself."

"I'd say the fact that we train people here who go on to make an important contribution to society later on. Our PhDs are welcomed with open arms all over the world, and some have reached the very top of their field. One of them is involved with Moon missions at the NASA Goddard Space Flight Center, while another works at the Jet Propulsion Laboratory - probably the no. 1 place for people in our field - where he was the navigation team leader for the Mars exploration trip. That is obviously a great source of pride to me, as are the TU Delft study programmes. I was able to appreciate their value even in Texas. I was able to join in with the discussions there straight away - it seemed TU Delft had given me enough baggage to be able to do so!"

"I would like to make a contribution to society, by getting on well with other people, family, and friends. My work is very important, but I do not live to work; I think being an al-round human being is even more important, although I am solitary by nature. I also believe in seizing the day. When you are young, you feel immortal: the world is at your feet. When you suddenly find you have passed 40, like me, then that feeling is no longer there. You are confronted by accidents, illness and death, and you realise that life is finite and that you have to enjoy it. I don't live the 'seize the day' philosophy myself, although I would like to do that to a greater extent. And that means, among other things, making choices, and not saying 'yes' all the time. One good presentation a week is better than ten bad ones." 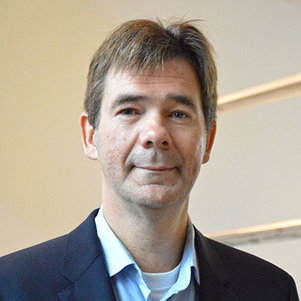