Professor of Novel Aerospace Materials (NovAM). Among other things I am also Scientific Director at the Delft Centre for Materials and the driving force behind the Innovation Oriented Research Programme (IOP) Self Healing Materials.

‘I am married, have three grown-up daughters from a previous marriage and also have a grandson and a granddaughter. I am 56 and was born in The Hague. Right now I live in Schipluiden, my fifteenth hometown. Materials and their properties are my ultimate fascination. Whenever I come across unusual materials I take them with me. In my office, for example, I have an aluminium beer can in the shape of a beer barrel. Anyone else just sees a beer can, but I think about the use of material: how were the crystals processed to achieve the required behaviour? It’s something that preoccupies me.’

‘Sports! I am from the Frisian branch of the family so skating is at the top of my list of priorities. I skated in the last seven editions of the Alternative ‘Elfstedentocht’ on the Weissensee in Austria: 100 people skating on a mountain lake in the piercing cold – fantastic! I have also played volleyball, badminton and basketball, and done horse riding. Beside sports, I am pretty good at DIY. I renovated large parts of our house myself. I also enjoy working in our large garden.’

‘I studied materials science at TU Delft. This enabled me to combine my interests in physics, chemistry and mathematics. Materials science is a fairly exclusive specialisation: I was the 134th Master of Metallurgy in the Netherlands. At the University of Cambridge I did my PhD research on the effect of raindrops on supersonic aircraft and rockets. We used ultra-fast cameras for that, which was very challenging! Until 1992 I worked with Akzo Corporate Research, researching super fibres. TU Delft then invited me to become a professor with the research objective of creating stronger steel and aluminium alloys based on improved physical insight. I have been Professor in the chair of Novel Aerospace Materials (NovAM) at AE since 2002. Our research group develops new materials for aircraft and satellites. One of our spearheads is self healing materials, such as metals, ceramics, polymers and coatings that restore themselves after damage. The traditional way of thinking that a strong material will automatically be long lasting is history. Our view is: it will only be long lasting if it can restore itself!’

‘That varies, but let me say: all the things I have yet to discover. Once something is finished, then I’m finished with it.’

‘The diversity. On an average working day I’ll start the morning working with a first-year student, followed by consultations with top scientists in my field of expertise. Then in the afternoon I’ll be at the ministry explaining why research is so important. What’s more, I can also plan much of my time myself. My work also enables me to investigate materials at the sub-nano level and to modify their properties in such a way as to create new, usable products. In short, I have a fantastic job.’

‘Protecting academic education and science during the coming period of cutbacks. I am very worried about the future of Western Europe. All the major investments are being made outside Europe. We might believe that we have a great deal of knowledge by nature, but the reality is different. At the Delft Centre for Materials, for example, we have to ask ourselves: what do we have to do now to ensure that we are still successful in 15 years’ time, when things will be very different indeed? I believe we should think more on the regional level, as they do in Germany. The Netherlands also needs to invest much more; compared to our eastern neighbours in particular, we are lagging way behind in that respect.’

‘I felt the job that I had been offered would be challenging. But to be perfectly honest, a position with any other university would also have appealed to me, one abroad perhaps. My choice of Delft has worked out well. I have been able to build up my own team, culture and environment. That took some guts, as you are in a sense venturing into terra incognita. In eight years we have established both a chemical and a physics laboratory. That was quite unusual and unique at the time, but has since become accepted. We conduct research at the nano level and are the only aviation faculty to provide such depth of research.’

‘I am flexible enough to think up new things. I can combine totally unrelated things to create something new. I am a man of new ideas. That’s why you’ll never find me in the optimisation phase, but always in the starting phase.’

‘I am impatient. Quality is paramount in my book. If quality is lacking, I can become very impatient, both towards myself and towards my staff.’

‘That the Netherlands dares to make choices now to also ensure success in 2050. That takes money, and it also takes a society of people with guts, and social cohesion between people with good economic opportunities and people with poorer ones. We will have to adjust to a new, lower standard of prosperity. We are emerging from an era in which Western Europe had an exorbitant level of affluence. Thermodynamically speaking, it would be impossible to maintain that infinitely. Prosperity is shifting towards Asia, South America and the Middle East, and the Netherlands will have to be prepared for that.’

‘Besides my home upbringing, I had the good fortune to meet two inspiring superiors at the beginning of my career. Firstly, my PhD supervisor at Cambridge, John Field. He was very good at encouraging freedom. Following that, there was my boss at Akzo Corporate Research, John van Aartsen. He is one of the best scientists I have ever worked with. He didn’t say much, but anything he did say was always crystal clear. He could set you thinking better than anyone else. I try to do that with my group: watch what people are doing and then ask the right questions to encourage them to perform to the very best of their ability. Having seventeen different nationalities makes for substantial differences in culture, and communication can be difficult sometimes, but it certainly provides some fascinating topics for conversation.’

‘I am a Reformed Protestant. I therefore believe that both I and my staff have tasks and responsibilities. Humour is also important: it’s a good way of coping.’ 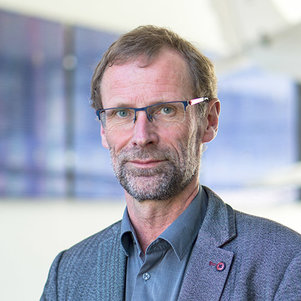