Wars, attacks and disasters that claim the lives of multiple victims are often commemorated in the form of monuments. Translating melancholy into architecture calls for particular sensitivity on the part of the designer, argues Sabina Tanović in her doctoral research on Memory in Architecture.

Creating something beautiful in memory of a terrible event is a design challenge unlike any other. “It is very much a double-edged challenge”, says Sabina Tanović. “Not only because it brings together beauty and horror but also because it contains a political message. Victims and perpetrators take a completely different view of what is being commemorated. This always forms the basis for an interesting challenge.” 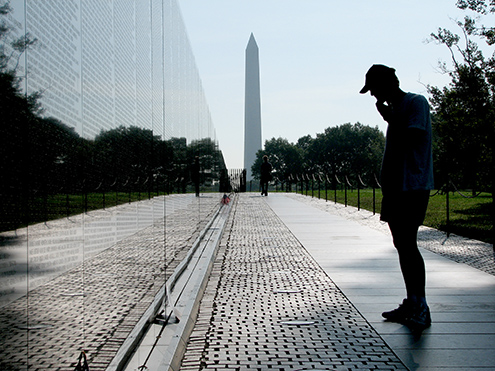 The monument to the victims of the siege of her city of birth Sarajevo (1992-1995) is a striking example of this. Although the city wanted to have a place of contemplation for its thousands of dead, elsewhere in Bosnia there were denials that a mass slaughter had even taken place. Tanović argues that memorials are seen as places of contemplation and healing for the grieving and there is a deep human desire to express this architecturally.

Over the years, there have been major changes to the way this is approached, as her comparative research exploring numerous West-European monuments reveals. The millions of victims of trench warfare in World War I were mainly commemorated by means of long lists of their names – a form of memorial that would later influence the design of the Vietnam Memorial (Washington DC). A century later, things were very different: the architects of Madrid's M11 Monument – to commemorate the terrorist attacks of 2004 – devised a ‘place of absence’ that can only be viewed from the inside. Commemorating the horrors of World War II called for a different approach. This was mainly presented in memorials as a battle between good and evil. The counter-monument movement that arose in the 1980s used other, more artistic, means in order to commemorate. The sunken column devised by Jochen Gerz as a Monument against Fascism is a good example of that. It alludes to another aspect clearly visible in monuments: healing and reconciliation. An example of this is the international memorial erected alongside the Notre Dame de Lorette monument in 2014. It made the French town of Verdun a place of shared commemoration a century after the start of World War I.

Notre Dame de Lorette is one of five case studies that Tanović explored in detail. Based on historic research and interviews with architects and staff at centres of remembrance  she argues that work on memorials calls for great empathy and flexibility from designers. “The designer must succeed in capturing ‘silent’ knowledge in order to invoke the experience people feel through memory.” This can prove difficult, as the years of debate on the establishment of a Holocaust monument in Berlin clearly show. The ultimate design of 2711 blocks of concrete of varying height remains disputed to this day, in part because it is popular as a children's playground. Tanović: “The debate it evokes can contribute to the process of healing. This, in a nutshell, is what it is all about.”