Läslo Evers (1971) studied Geophysics at Utrecht University. After his graduation, Läslo started working at the Royal Netherlands Meteorological Institute (KNMI). Next to this, Läslo obtained his PhD “The inaudible symphony: on the detection and source identification of atmospheric infrasound” at the TU Delft 2008. Läslo kept connected to the TU as part-time Assistant Professor at L&R. Läslo started as an Associate Professor with the CEG faculty, in 2012, where he was appointed part-time Professor in Seismo-Acoustics in 2015. Läslo also heads the R&D group of Seismology and Acoustics at the KNMI.

Läslo research focusses on the use of Seismo-Acoustics for identifying geophysical sources and changes in the media of propagation. As such, he uses seismological (solid earth), infrasonic (atmosphere) and hydro-acoustical (ocean) observations from both ambient noise and deterministic transient sources. Education and research has concentrated on, for example, changes in the state of the upper atmosphere and deep ocean. Furthermore, wave-coupling between the earth, ocean and atmosphere received his attention. A variety of source has been studied like: earthquakes, nuclear tests, (underwater) volcanoes, icebergs, meteors, calving ice and glacial run-off, chemical explosions and supersonic source such as rocket launches and fighter jets. 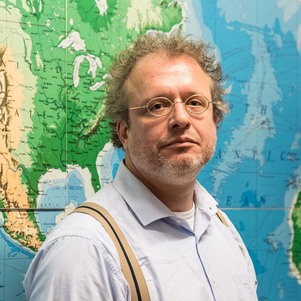