Operator-based linearization (OBL) is a novel advanced non-linear simulation framework. It provides an improvement in the efficiency and robustness of the simulation of multiphase flow and multi-component transport in non-isothermal subsurface systems.”

Non-isothermal multiphase compositional simulation is based on the solution of governing equations describing mass and energy transfer in the subsurface. The solution process requires a linearization of strongly nonlinear governing equations describing  the process. Usually, a Newton-based method is used for the linearization that demands an assembly of a Jacobian and a residual for a fully coupled system of equations. Operator-based linearization (OBL) is a new linearization approach which is proposed for a non-isothermal compositional problems and has been tested for truly multi-component systems of practical interest. The key idea of the approach is the transformation of discretized mass conservation equations to operator form containing separate space-dependent and state-dependent components. This transformation provides an opportunity for an approximate representation of exact physics (physical properties) of the problem. Specifically, each term of the conservation equations is presented as the product of two different operators. The first operator depends on a current physical state of the system and contains different properties such as density, viscosity, relative permeability, etc. The second operator captures both spatially altered properties, such as permeability, and the rest of state variables, such as pressure, in the discrete approximation of gradient. At the pre-processing stage, or adaptively during the course of simulation, all state-dependent operators are uniformly parametrized within the parameter space of the problem (pressure-temperature-composition intervals). During the simulation process, a multi-linear interpolation is applied to approximate the first type of operators, while the second type of operators is processed based on the conventional approach. Simulation results show that the proposed approach manages to reproduce the reference solution results quite accurately with a reasonable resolution of interpolation tables. At the same time, the coarsening of the parameter space improves the nonlinear solution while errors in physical approximations remain under control.  The operator-based version of the original problem could be seen as a proxy model where the accuracy of the nonlinear representation of the physics can be balanced with the performance of nonlinear solver, while the assembly of the residual and Jacobian is substantially simplified.

An example simulation is shown below: 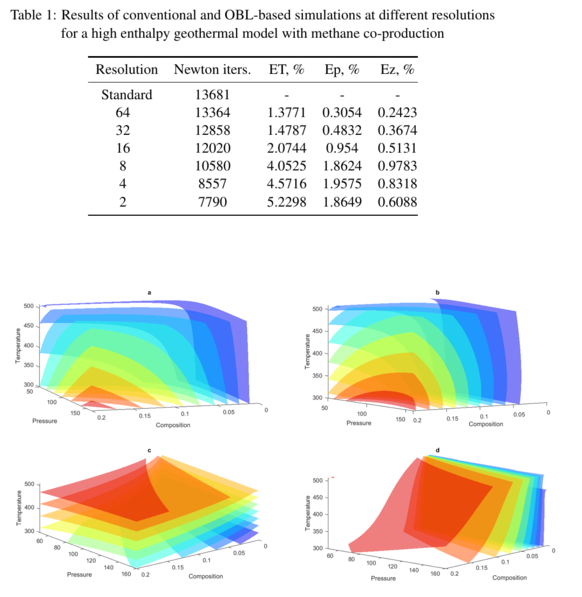