Since September 2016 Stuart Pearson has been carrying out his PhD in coastal engineering at TU Delft (0.8 FTE), where he is investigating sediment transport pathways on an ebb-tidal delta in the Dutch Wadden Sea.  He is also employed part-time at Deltares (0.2 FTE), where he is developing an early warning system for wave-induced flooding on low-lying tropical islands.

He recently finished his master's degree in the Coastal and Marine Engineeering and Management (M.Sc. CoMEM) program at TU Delft, carried out jointly with the University of Southampton and the Norwegian University of Science and Technology (NTNU).  For his master's thesis he researched wave runup on coral atolls at TU Delft in partnership with Deltares and USGS.  In summer 2015 he researched the erosion of permafrost coastlines in the Arctic at NTNU.  He was employed at W.F. Baird & Associates Coastal Engineers Ltd. for over two years where he was primarily involved in hydrodynamic and sediment transport modelling of rivers and coastal regions.

You can also find him on ResearchGate or LinkedIn. 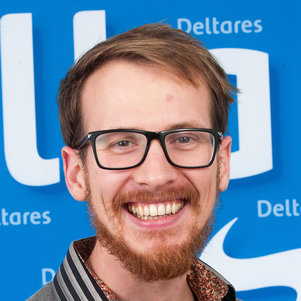