Building sand castles for your graduation

What Civil Engineering master’s student Jasper Scheijmans actually wanted was to graduate at a big dredging company but Covid-19 intervened. Jasper and his professors came up with a completely different idea. Why not carry out research into coastal dunes inside a container on the beach?

Jasper linked his graduation project to Hydraulic Fieldwork, commissioned two hefty diggers to place two 12.5 metre shipping containers in the surf and got to work. Assisted by 16 fellow Hydraulic Fieldwork students Jasper set about building dunes inside the containers to test the merits of this particular kind of dune research.

Tell us what dune research consists of.

Jasper: 'Experiments in dune research are usually conducted in labs or in the field, or the beach in this case. So, it’s a choice between building a dune in an expensive delta flume which can generate any wave you like, or building a dune on the beach where you have to contend with different types of weather and the conditions that go with them, such as rainfall, wind and currents. My professors and I decided to put two big shipping containers in the surf and build a number of dunes in them. That meant using real waves instead of simulated lab waves which could make this a relatively cheap addition to coastal dune research.’ 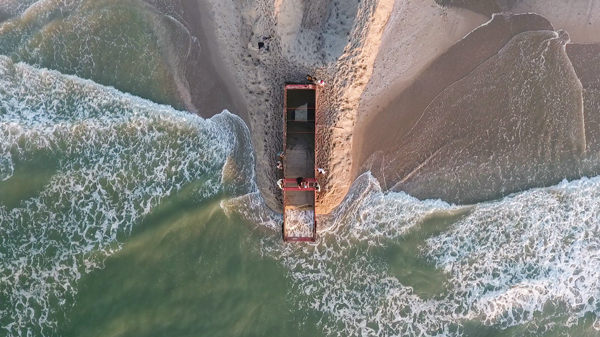 What was your research question and how did you answer it?

Jasper: ‘At this moment, I’m still at the stage where I’m analysing the data so unfortunately, I have no final conclusion I can share yet. What I’m investigating is whether the results of the kind of tests I have been doing are comparable with earlier lab tests or field tests without the use of a container. I want to find out whether shipping containers have a viable place in dune research.

To do that I conducted four tests over four days. I positioned the containers in such a way that water only came in at high tide. That enabled us to build the dunes at low tide and conduct the test when the tide came in.

During the first test the waves entered the empty containers. Using pressure sensors, go pros and gps measurements we tried to ascertain if the waves behaved differently inside the containers compared to what they were doing outside. We then did three tests involving different dune heights. We carried out measurements throughout high tide to study the impact of the waves and the subsequent dune erosion. I’m still working on the final data analysis, but it looks as if the tests have been a success!’ 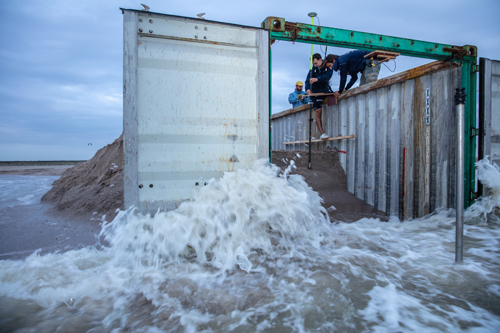 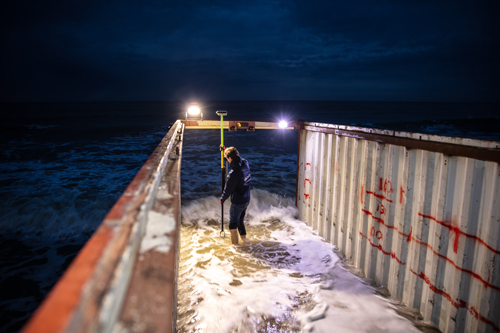 What was your biggest challenge?

Jasper: ‘How do I get two containers each measuring 12.5 metres in length on the beach? And how do I build a 1.5 metre dune before the tide comes in at 7am?’ ”

What is the most important thing you learned?

Jasper: ‘A graduation project is yours to make as complicated, easy, big or small as you like. That is something you really have to think about before you start. I also learned that any project has its ups and downs. It’s all part of the process.’

What did you enjoy most about your project?

Jasper: ‘That life is a beach at the end of a successful test! And the sunsets, they were nice as well. There were lots of highlights. Rody, the driver of the bulldozer who came to help build a dune at 5 in the morning in exchange for a crate of beer. And Hilbrand, another digger driver, who brought us a storage container but left a huge block of concrete inside as a surprise so there wasn’t room for much else. We went from building a dune in the storm to sunglasses and swimming trunks the next day. And I liked my bike ride to the port of Rotterdam to go shopping for shipping containers.’ 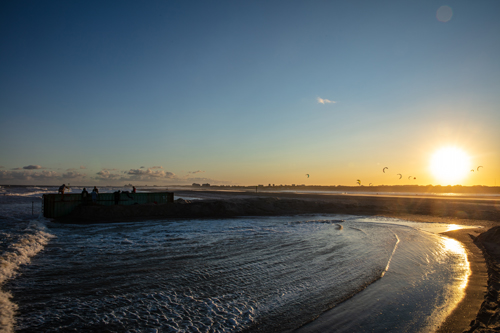 What next for the research project?

Jasper: ‘The containers are the property of TU Delft so they can now be used for other projects. And if other scientists want to do dune research but don’t have access to a wave flume I hope they will know that there is an alternative.’

What are your plans for the future?

Jasper: ‘I’m still processing the results of my research but when I’ve finished I want to get a job at a big dredging company or contractor, perhaps as project manager or in project execution. In 5 to 10 years I hope to be involved in major coastal engineering projects, preferably abroad. And who knows I may get the opportunity to set up a few myself.’ 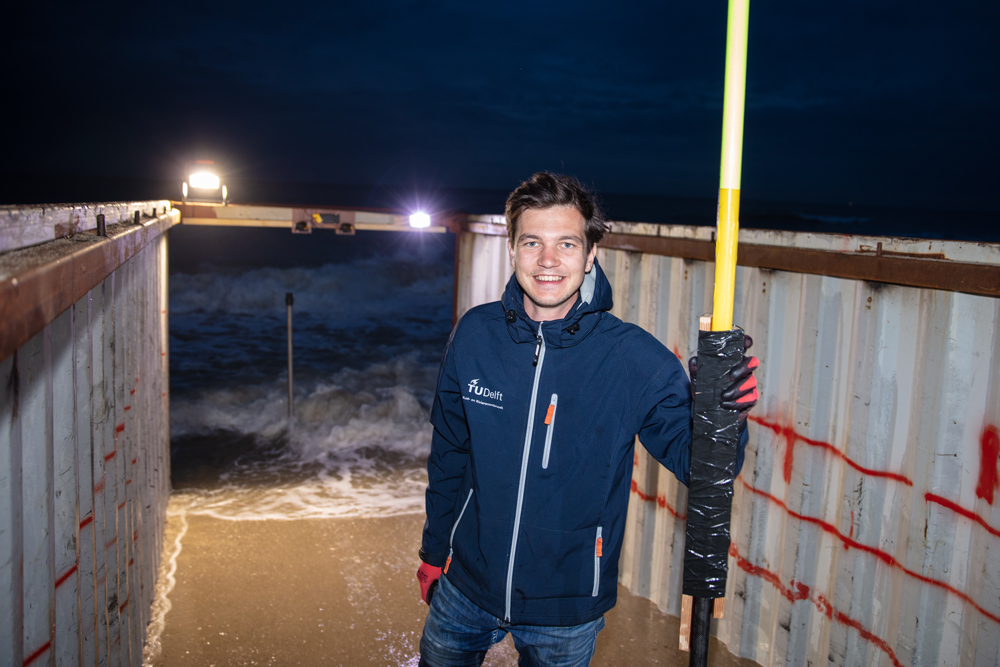 Which bachelor’s programme did you decide on and why?
‘I have a bachelor’s degree in Civil Engineering but it wasn’t my first choice to be honest. I wanted to do dentistry but there weren’t enough places to go around and I didn’t get in. Civil Engineering was next on my list. Both involve building bridges albeit on a different scale. It was lucky in a way because I have found this is absolutely the best choice for me!’

How did the bachelor programme prepare you for your graduation project?
‘The Civil Engineering Bachelor’s programme is a very broad one so while I learned a lot of interesting stuff it did not have a great deal to do with shipping containers on a beach. That came later, during my master’s programme. A bachelor’s degree gives you the groundwork for a master’s, of course. You’re building on the mathematics and physics you learn there. The more you progress and the more basic knowledge you accumulate, the more you can immerse yourself in the subjects that really interest you. This motivated me a lot. The bachelor’s programme taught me to focus on solutions. You learn to undertake action independently and show initiative. That is very useful as you go on to do a master’s degree and it certainly helped me to come up with an alternative graduation project.’

Which master’s programme are you currently doing?
“‘My master’s is also in Civil Engineering. It is very comprehensive and there is plenty of room to choose your speciality. I chose ‘water’ and Hydraulic Engineering in particular, which is made up of different specialities as well. I chose the Coastal Engineering track because it teaches you to find solutions for the major problems coastal areas are being faced with, such as flooding and sea level rise. Building with nature is an important part of this. The Dutch have always been good at controlling the water. Ever since the flood disaster of 1953 it’s been all hands on deck. Without our dykes and dunes 60% of the country would be flooded regularly. Other countries are looking on in amazement at the solutions the Dutch have found to tackle the problem. It’s cool to be a part of this.’

What is your favourite subject and why?
‘I have three in fact: Coastal Dynamics, Building with nature and Hydraulic Fieldwork. Coastal Dynamics explores the processes and dynamics of the coastline, while building with nature links technology with natural processes. It investigates whether it is possible to use nature instead of working against it. And Hydraulic Fieldwork teaches you to put everything you learned in books into practice. All three are essential for every prospective hydraulic engineer!’

Which parts of your master programme were particularly useful during the research?
‘That would be a solid, practical knowledge of gulf streams, dune erosion processes and other physical processes. But you also develop a good personal relationship with your professors during a master’s. And that helped me a lot when I set up this project.’ 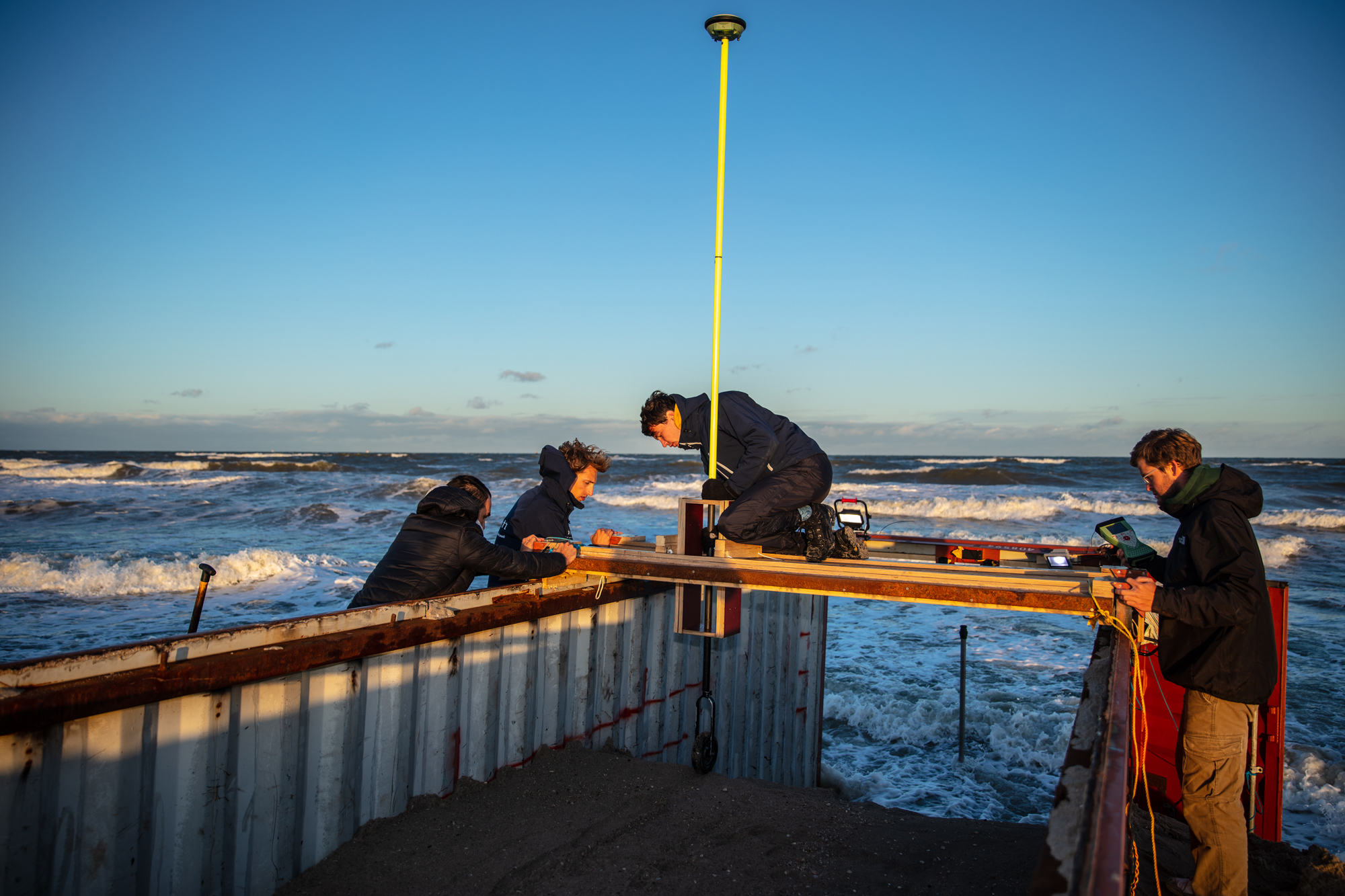 Want to know more about research in the field of Coastal Engineering?