Reading currents in the ocean

A spur of the moment decision to spend the summer onboard a ship researching ocean currents plunged Master students Niek Kusters and Fleur Wellen into a wet and wonderful five-week adventure.

After completing the mandatory Safety at Sea training, Niek and Fleur joined NIOZ maritime researcher and expedition leader Femke de Jong and the rest of the crew on board research vessel Pelagia, their home for the next five weeks. Their mission? To boldly go and measure and chart the deep-sea currents of the Atlantic Ocean.

The importance of Atlantic currents is best explained by the image below. The Atlantic Ocean is the only place on Earth where warm surface water from the tropics (the Caribbean area) flows to very high latitudes. On its way north the current cools, divesting its heat into the atmosphere. Combined with westerly winds this process is responsible for our temperate climate. The cool water sinks to deep-sea level and returns as a cold current to the equator and penetrates further into the oceans. You could say that this Atlantic current acts as a conveyor belt, transporting heat from the equator to the North Pole. Both the temperature and the saline content of the water affect the strength of the current and, consequently, our climate. If you would like to know exactly how this process works, we recommend you watch Caroline Katsman’s mini lecture on the subject (in Dutch). 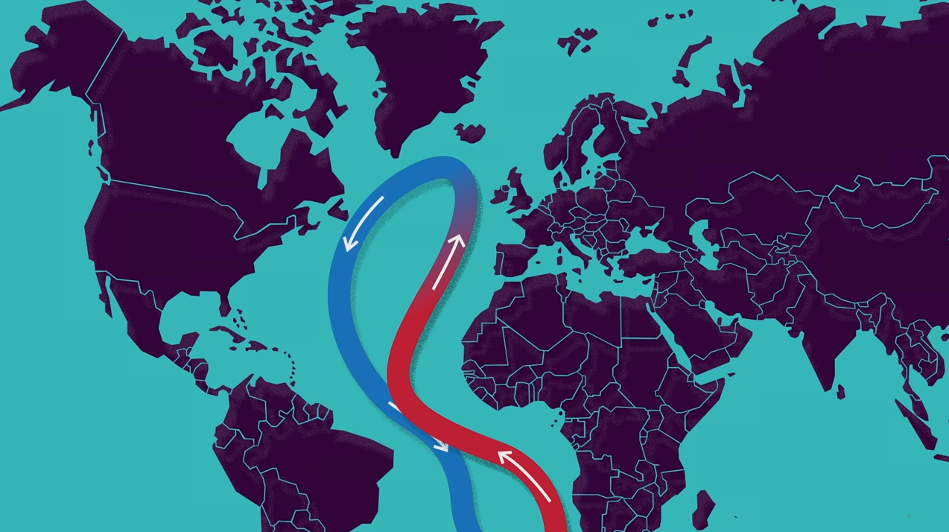 Now that we have explained the theory here’s what Niek and Fleur have to say on this adventure.

How did this expedition come your way?

Fleur: ‘At the beginning of June last year I came across a message from Femke de Jong, a physical oceanographer with NIOZ, on the Physical Oceanography page calling for students willing to go on an expedition to Greenland to measure currents. I had studied Physical Oceanography for a year and I immediately wanted to take part. I wasn’t going to go anywhere anyway because of Covid so this looked like a great alternative! I sent a letter explaining why I wanted to be part of the expedition along with my CV and after an interview via Skype, Femke told me I was in.’

Niek: ‘I received an email in June last year from my supervisor Caroline Katsman asking if I would be interested in going on an expedition to the North Atlantic. It would mean interrupting my final researchproject but opportunities like this don’t come around very often so I just had to say yes! Apart from going on a great adventure, it also meant a first-hand look at the subject of my research.’

What did you look forward to most?

Fleur: ‘I didn’t really know what to expect. The thought of spending five weeks at sea with the same bunch of people and little contact with the outside world was very attractive but a little daunting as well. What to pack for a five week stay on a boat? Would I be able to exercise? What if I become seasick? And will we have a good time together? These were all vaguely worrying questions.’

Niek: ‘I was really looking forward to the trip. I knew it would be a great adventure, but I also felt some trepidation at being on the open sea for such a long time.’

Could you tell us a bit more about the expedition?

Fleur:  ‘There were 16 of us on board the research vessel Pelagia, 4 researchers and 12 crew members. Before we could set sail for Cape Farewell, which is the southernmost tip of Greenland, we had to have a health check. That made sense because although there was a small emergency hospital on board, medical help would not be available in the remote area we would be navigating. We also did a Safety at Sea training with the other students and Femke, our lead researcher. That taught us what to do in case of an emergency, for instance if we fell overboard or had to abandon the ship. It was great fun to meet the other expedition members in person and to practice survival skills in the pool. Skyping is just not the same.

Our first two weeks at sea were primarily spent getting used to the situation. We had a big storm two days in which put me out of action for a while. And we had to get used to each other of course, and to the ship routines. But everything went without a hitch and everybody got on really well! It took about two weeks to get to Cape Farewell. We then began to take measurements and coordinate the other activities. Everyone had their own daily schedule of tasks.

My day would often start at 8am when Nora, who is a student at NIOZ, and I would operate the CTD (conductivity, temperature, depth) device. This instrument enables you to take water samples at a variety of depths to establish temperature and salinity. That was always a fun start to the day and I’m sure the whole ship enjoyed being woken up by our giggles. We would then go to the bridge to spot the moorings, long cables with measuring instruments attached to them which had been in the water since the last expedition. From the Pelagia we could free them from their anchors so they would float to the surface. As soon as someone spotted them, they were hauled on board to be cleaned. That could be a pretty smelly job because of all the sea creatures that had attached themselves to the instruments over time. We would then read the measurements made at a depth of three kilometres over a period of two years. Then we would anchor the moorings back to the seabed again. We also helped put out drifters, which are little floating measuring instruments that follow the current. Apart from the measuring work I also enjoyed helping the crew, turning threads for the anchors, measuring lengths of cable by walking in circles on the deck, hauling in the CTD device and lots more. In my spare time I would practice sport, sit and read on the bow, do some whale or dolphin spotting or have a stroll and a chat with the other researchers and crew members. Everyone had their own cool tale to tell about earlier adventures at sea.’ 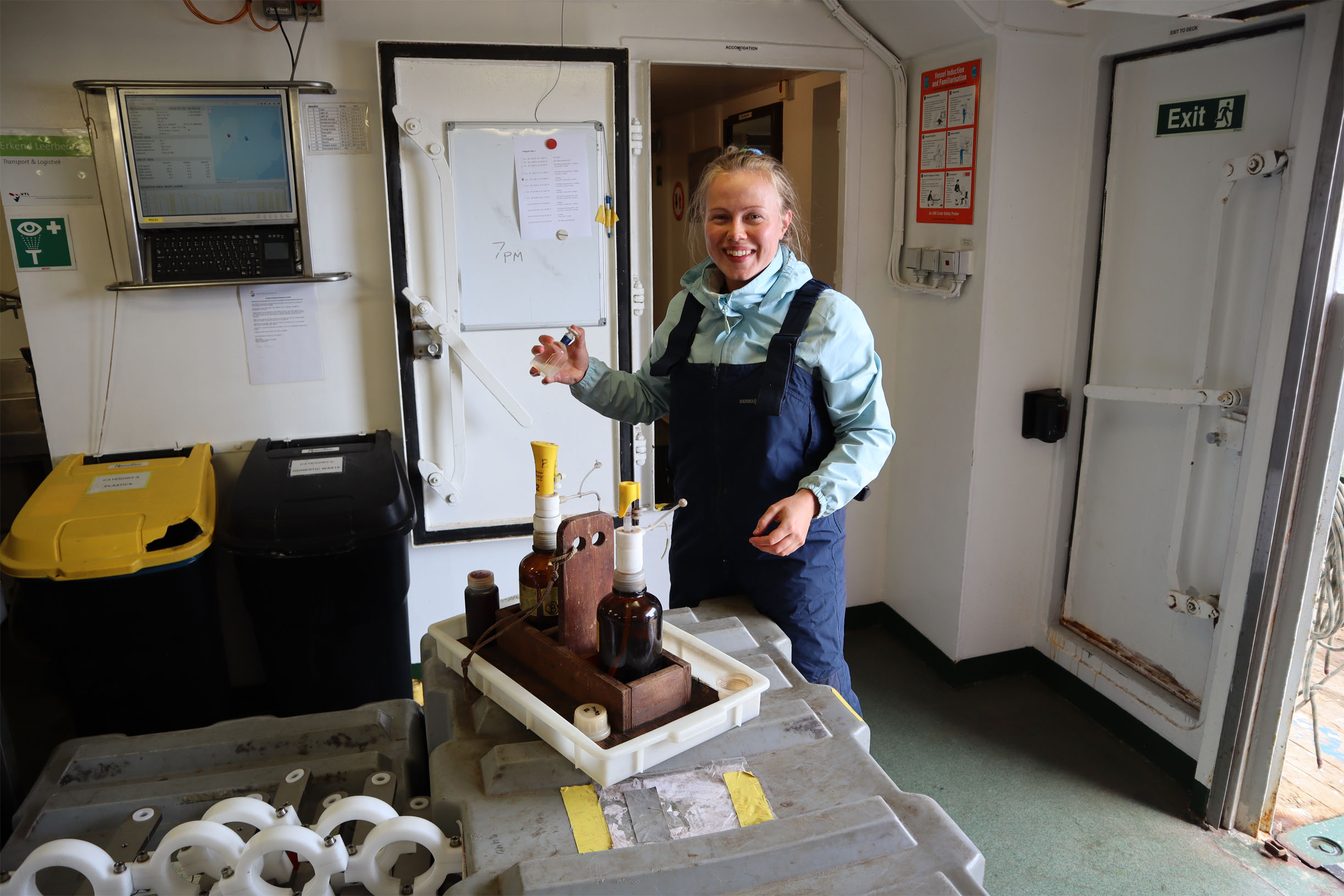 Does this experience fit in with your past and current studies?

Niek: ‘Yes, and in particular with the subjects I studied for my Master’s degree in Hydraulic Engineering, such as Physical Oceanography which is part of Environmental Fluid Mechanics. It also came in useful for my final project in which I look at the AMOC (Atlantic Meridional Overturning Circulation) or ‘conveyor belt’ effect in the context of a climate model. My focus was mainly on the model and on the spot observations didn’t really enter into it. This journey has given me new insights which I have been able to apply.’

Fleur: ‘To me it was very interesting to see science in action, to actually witness all the stuff that I learned about during my Bachelor’s and Master’s. I suddenly became aware how much work had gone into the graphs in my books and how much time, resources and people were needed to collect all the data behind them. A Civil Engineering Bachelor’s degree is not really focused on water, and ocean currents don’t feature at all, so I didn’t really expect I could head in that direction. But it does teach you the basics needed for an expedition such as this.

I did see the link with Environmental Fluid Mechanics which was part of my Master’s in Hydraulic Engineering. I had seen pictures of moorings and drifters in my Physical Oceanography study material and here there were, on the deck of the Pelagia. Talking and brainstorming with other researchers was a real eye opener. It just showed that theories very often don’t stand the rigours of a practical test. Things will go ‘wrong’, no matter how meticulous the planning. We had an instance where a Microcat (an instrument to measure currents at great depths) came loose and fell on the deck so we could no longer use it for mooring purposes. And one of the instruments we thought had been collecting data for the last two years had stopped working after a year and a half. So, then the question is how to deal with a hole in the data. We learned a lot from events like this. The trip has also been a great help for the subject of Hydraulic Fieldwork because I’ve been taught to operate devices like CTD and ADV. I also learned about the importance of making notes and checklists when measuring and using instruments. That knowledge will come in handy when I’m going to do the fieldwork for my final project at the Marker Wadden.’ 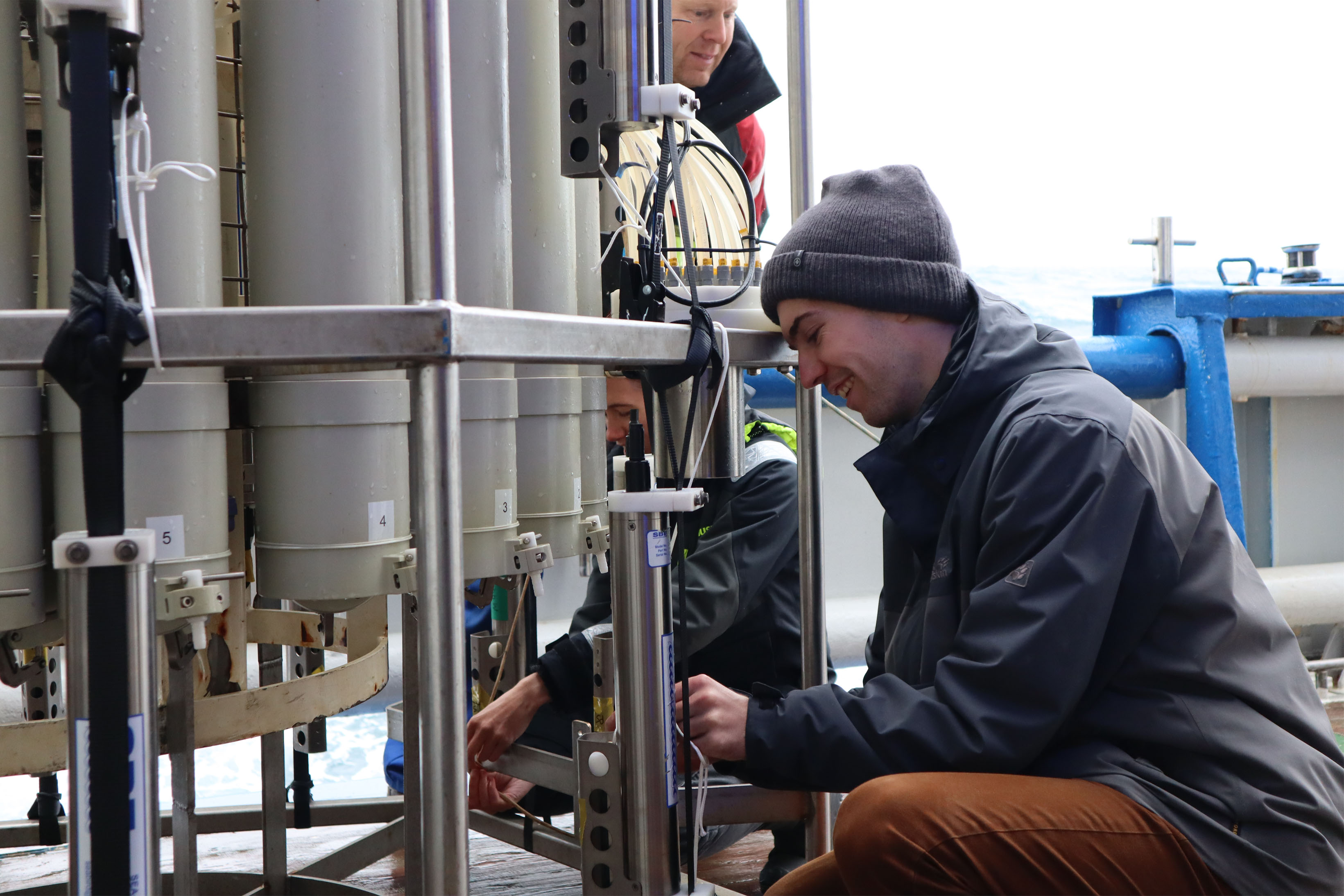 How do you look back on the expedition?

Fleur: ‘I wouldn’t have missed it for the world. I learned lots of skills which I will apply to the subjects I have left to do for my final project. I know much more now about what goes into doing research. Even the possibility of doing a PhD following my Master’s degree now seems that much closer. The people I met on the trip made it a great experience as well. They taught me a lot!’

Niek: 'I learned a lot on the trip. The most important aspects of fieldwork is handling instruments and processing data, something I hadn’t done on this scale before. It was quite special to realise that these instruments had been doing their job in very tough circumstances, at depths of three kilometres. Compare that to the North Sea coastal waters which are only about ten metres deep. Because they had been sitting in such deep waters the instruments were incrusted with marine life that we hadn’t seen before, which was very cool. Apart from the instruments and the measurements the isolation from the rest of the world has also stayed with me. There was no phone coverage and we didn’t see another ship for ages. But even though I was ‘stuck’ on a ship with a small group of people I experienced a huge sense of freedom every time I went on deck to scan the horizon for a sign of a whale.’

Niek: ‘When we made our way back to Texel the new moorings were in place, with fresh batteries and an empty memory card, ready for two more years of data collecting. Slowly but surely the time series is being expanded. I picked up my final project again on my return and have finished my thesis. At the moment I’m on the lookout for possibilities to continue in the field of physical oceanography, in other words, I’m looking for an interesting PhD position.’ 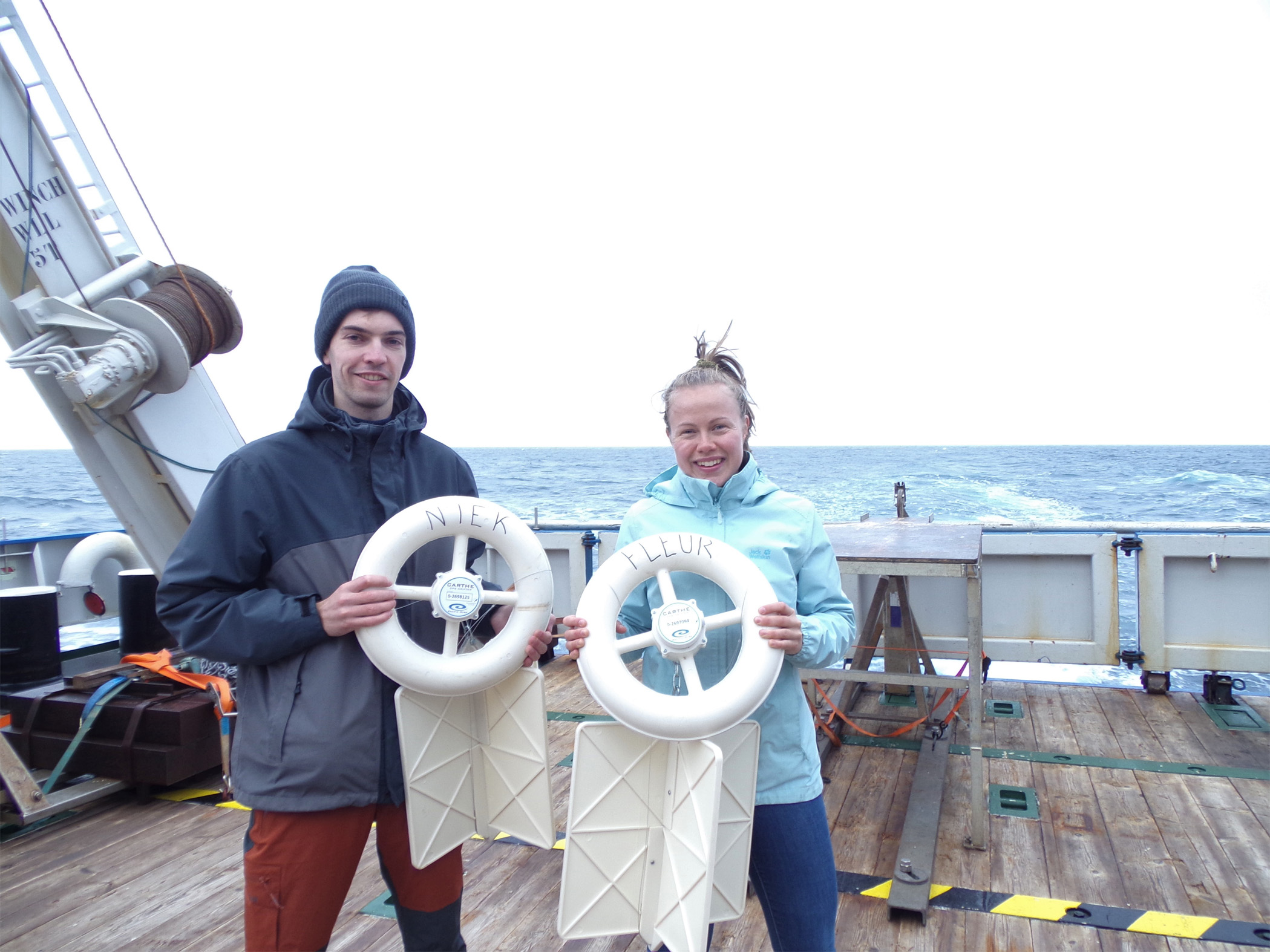 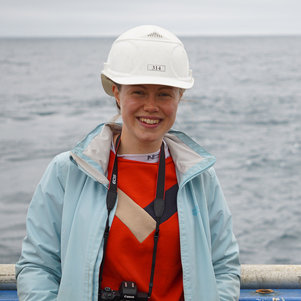 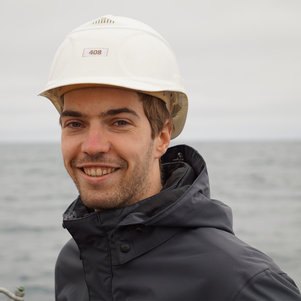 What happens when the Atlantic Ocean starts to flow differently?
The Atlantic deep-sea current is of importance to our climate. But what happens if this current changes or even stops? According to the scenario of "The day after tomorrow," the northern hemisphere then turns into an ice landscape in a matter of days. Whether this doomsday scenario could really happen and is realistic in the short term, you'll hear from Caroline Katsman (TU Delft).