Ceramics for shooting at

Most people think of earthenware or porcelain when they think of ceramics and, as a result, of fragility. “Are you working with Kevlar?”, is something Ir. Erik Simons hears a lot when he says he’s conducting research into bullet-proof materials, yet it is nevertheless ceramics. In collaboration with TNO, the PhD candidate is modelling the impact-resistant properties of this material.

Erik Simons is a home-grown PhD candidate having earned both his bachelor and master’s degree at CEG where he graduated with honours on the modelling of damage in concrete. After a year elsewhere studying medical glues, he is back at the Structural Mechanics research group to conduct his PhD research into ceramics. There are similarities between concrete and ceramics. “Both are stronger under pressure than under tensile loads. Another parallel is that both can fail in a brittle manner without deformation,” says Simons. In other words they break like a dropped cup would. Naturally, there are also differences. “Concrete is much more porous than ceramics and under pressure that leads to significantly different behaviour. However, you can apply comparable principles and ideas to model the materials’ behaviour. The differences are primarily at the material structure level.” Ceramics are definitely not a new material. There is some 7,000 years between the earliest band ware pottery in Europe and the ceramic heat shields of the Space Shuttle. The material developed considerably over that time. “Particularly the precise chemical composition  and the modern production methods are different,” explains Simons. Ceramics were first used as bullet-proofing in the 1960s, at the time of the Vietnam War. Ceramics are much lighter than steel that was used  to make suits of armour until well into the First World War. “Nowadays a combination is often used, a sheet of steel behind a sheet of ceramics,” according to Simons. One of the first applications was the armouring of helicopters where weight plays a crucial role.

In spite of the long history there is still little knowledge in the field of impact-resistant properties. “Research into this has been going on for years, but often experimentally,” says Simons. This works as follows: you take some armour material and shoot at it. “What this shows you is the situation before and after the shot and – using high-speed cameras – you can also see what happens and at which speed. This may work well for determining how thick your armour needs to be to stop a particular projectile, but it doesn’t provide much information on what happens in the material during the impact.”

There is a clear need for the latter, particularly when it comes to finding increasingly capable materials. There are a plethora of conceivable ceramic materials. After all, ceramics are produced by combining two or more chemical elements often a combination of a metal and a non-metal. “That means there are a huge range of options,” according to Simons. “Basically, you want to be able to select which material is suitable for armour beforehand using simple tests, not only after shooting at it.” Such a simple test could, for example, be a static compression test whereby a hard object is pressed into the material. “In principle, that would allow us to make some statements about how the damage spreads through the material. In turn, this is related to how well the material withstands dynamic loads such as an impact.”

Simons wishes to use the results of such static experiments to refine existing models for the dynamic loading of ceramics because these are far from comprehensive. “When we simulate these compression tests in a model we can see whether that is in line with what happens in reality. That then provides us with information about how we can improve the model. If, for instance, certain tears appear during the test that don’t occur in the current models then the latter may have issues.” The second part of his research focuses on the question of which phenomena are still lacking from the model. “There is still a great deal we don’t know about what goes on in the microstructures.” Simons is primarily interested in failure mechanisms. “If you know exactly which conditions ceramics fail under you can use this to design your armour. You can then make optimum use of the ceramic material resulting in a lighter or stronger bullet-proof vest.”

At micro level, ceramics consist of crystals. These deform influenced by outside forces such as an impact. How exactly the structure deforms depends on the tension conditions in the material during the impact, but these are not the same everywhere. “There are areas where the material is put under a tensile load and areas where it is under enormous pressure. How the material reacts to this and which processes occur, differs considerably,” explains Simons. “Under tensile or displacement  tears will occur between the crystals. But, under higher pressure, this tearing doesn’t or hardly occurs. Instead the crystals deform plastically, something that cannot be described as brittle behaviour. Under the right tensile conditions and if sufficient deformation occurs, the plastic deformation of the crystals can, ultimately, lead to tears after all.”

Simons’ ultimate goal is to incorporate all these processes and phenomena into the material model correctly. Starting with alumina (aluminium oxide) that is used a lot these days. “It’s a very hard substance so if you shoot at it the projectile will deform substantially and, in the best case scenario, even shatter on the armour. The ceramic itself could also break, but that is of less importance as long as the projectile loses its energy.” Another popular material is boron carbide, a substance almost as hard as diamond. Simons hopes to create a generic model that also incorporates this. “As long as the occurring phenomena are the same you could also use such a model for other armour ceramics by merely modifying the material parameters.” Even though he thinks not all ceramics are equally suitable. “You could devise something exotic incorporating titanium and that may stop a projectile, but it won’t meet the other requirements.” These are that the material should preferably not be too expensive, be common and easy to process.

After 18 months there is still plenty to do for Simons for the time being. Deciding what to do after receiving his PhD is a decision he’d rather postpone for a while. “I can imagine an academic future for myself, but I might have changed my mind in 2.5-years’ time.” Nevertheless, TU Delft is a great match for him. “I always enjoyed the exact sciences and technology. When I was a kid I wanted to be an inventor and what I ended up doing isn’t that different.” Something else Simons has been doing since he was very young is swimming. He does so at a very high level. “I take part in the Dutch national championships,” he explains. “I don’t win any medals, but I do pretty okay in comparison to the people who swim full time.” It’s a great way to relax. “I always go swimming in the mornings and when I don’t I notice that I have less energy the rest of the day.”

And what about Kevlar? “Kevlar and other aramids are fibres woven into a textile that work like a sort of net.” “This only works if there is sufficient space to slow the projectile down. Small, low energy projectiles will stop inside the vest. But the wearer will suffer bruising and contusions.” This definitely isn’t suitable for larger projectiles. “They have higher masses and speeds, both of which create more energy for the projectile i.e. they take longer to slow down. In that case, the vest slows the projectile down insufficiently which means the bullet may penetrate the vest or even drag it into the target along with the armour.”

It’s all down to what the threat is. A small-calibre handgun is an entirely different kettle of fish than an AK47. This applies to every armour application. “In principle you can armour everything against everything, but nothing for rapid transport. It’s always about finding an equilibrium between protection and mobility.” Ceramics’ important advantage are their relatively low weight. This makes it primarily suitable for situations in which mobility is key. The clearest example being the bullet-proof vest. “It’s also used to protect satellites against space dust,” says Simons. “And I think Obama’s car probably also incorporates a ceramic layer.” 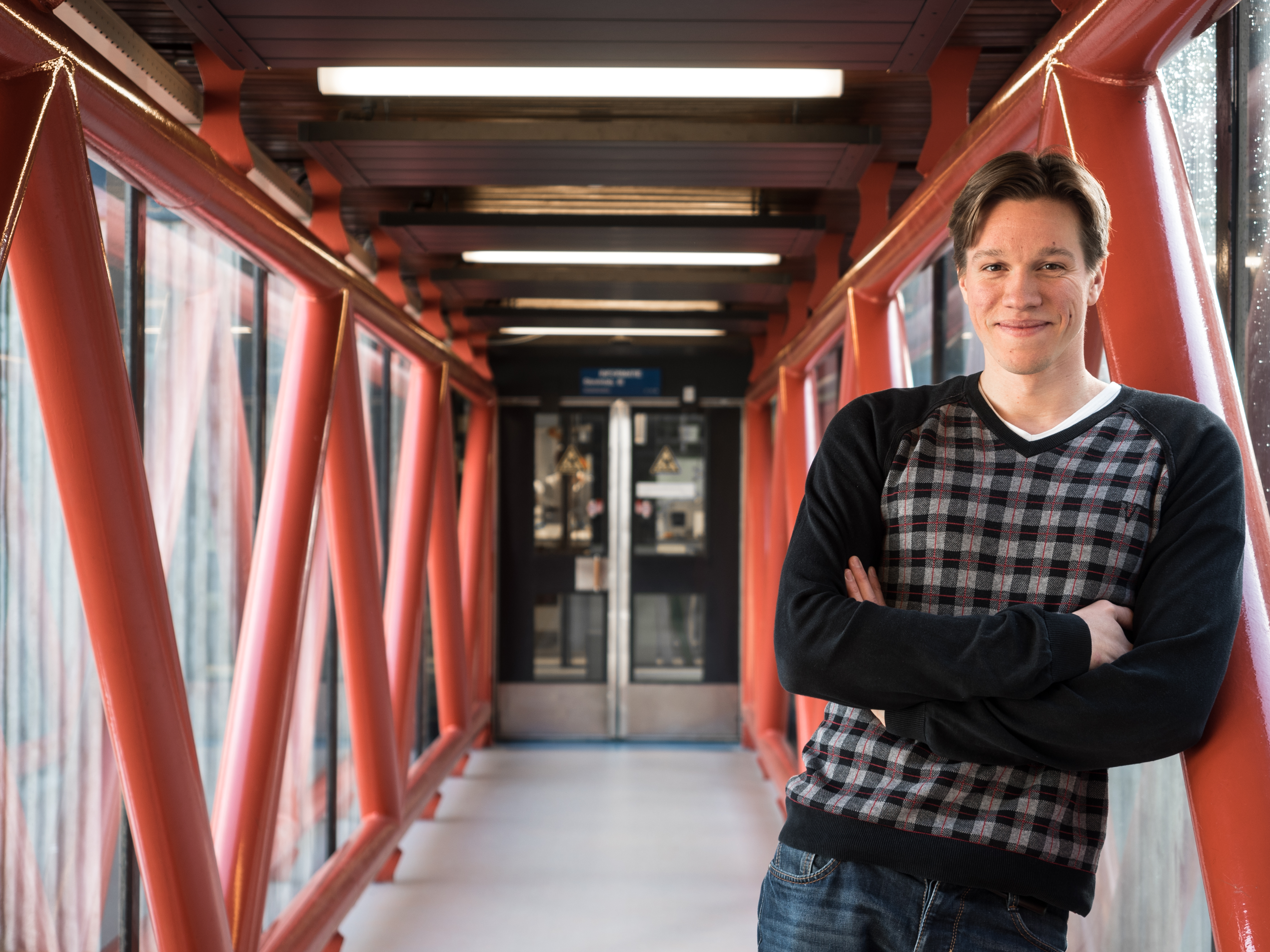