TU Delft is going to become a little bit greener on top: the roof of one of the lecture rooms of the faculty of Civil Engineering and Geosciences has been turned into a sustainable ‘polder roof’. The green blue roof can collect, store and discharge rainwater in a controlled manner. For researcher Olivier Hoes (Watermanagement) the roof is a field lab to research how this smart roof deals with heavy rains and heat stress.

For some years now summers have been getting wetter, with downpours of 25mm per hour the rule rather than the exception. The heavy rains overwhelm the city’s sewage system causing streets, basements and railway stations to be flooded. This can lead to considerable disruption and damage. It is a challenge for technicians and engineers to come up with new ways to make cities climate proof and climate adaptive. In this case all they had to do was look up.

The flat roof of one of the lecture halls faculty of CEG will in the years ahead, be working as an ‘open air lab’ to research and monitor the performance and effects of the polder roof.

A polder roof turns a roof into a place where rainwater can be collected, stored and discharged in a controlled manner. ‘A polder roof is a green roof and a blue roof rolled into one,’ says water management researcher Olivier Hoes who is heading the team. ‘A ‘regular’ green roof will only retain a small amount of rainwater from a downpour. Most of it runs off to the ground so just a fraction of it is retained by the vegetation which is usually sedum. A polder roof also stores and manages the rainwater, buffering the whole volume of rainwater which can then be used for watering. It’s really a green-blue roof.’

The polder roof layer of substrate roof hides a system of crates with a 60mm space in which the water is collected. An essential role is played by the sensor-controlled moveable discharge valve which will automatically retain the maximum amount of rainwater and release it only when it is possible and necessary. ‘This will reduce the pressure on the sewage system in case of a downpour and prevent flooding,’ Hoes explains.

One of the things Hoes and his team will be looking into is how to use engineering techniques to process weather forecasts. ‘We are going to investigate the possibility of  incorporating weather forecasts in the software which controls the valve mechanism, for instance from sources such as Buienradar. You don’t want to discharge the water unnecessarily but you don’t want to retain it for too long either.’

Climate control inside the building

Apart from these engineering issues Hoes is also curious about the impact the polder roof will have on the temperature in the space beneath it. ‘We know that the vegetation will make it a cooler space than the one underneath the control roof but how big will the difference be on a summer’s day? Will it be 1 degree or 10?’

‘And what will the evaporation rate be? On a normal roof it is around 10 percent and the rest of the water goes down the drain. On a polder roof with the right vegetation this could increase to the whole of the annual precipitation, an average 880mm.’

In order to compare the measurements taken on the polder roof a control roof was created nearby. The identical flat roof is situated at less than a 100 metres on the roof of another lecture room of the same faculty building. Hoes: ‘Its proximity means the weather conditions are virtually the same for both roofs so we can monitor them under comparable circumstances.’

Hoes is expecting to see the fruits of his labour next year: ‘In order to make even better use of the roof we are going to plant things like lettuce and strawberries in addition to the sedum we are growing now.

Apart from a vegetable garden the polder roof is an excellent showcase for the potential such roofs hold. Hoes: ‘It would be great if green-blue roofs were included more in building projects. As long as a roof is watertight and the construction is strong enough it can be used anywhere.’

Can polder roofs in the Netherlands help mitigate the effects of downpours? ‘It won’t be a cure-all on a national scale,’ Hoes says. ‘But it can be a great help locally. Think of the built-up areas around train stations, such as the existing green square in front of Sloterdijk station, or the public space around the town hall here in Delft. A polder roof feels like a park except you’re on a roof and it won’t flood when there’s a big downpour.’

A important added value of a polder roof is the enjoyment it can give its users. ‘What could be better than to go up to the polder roof to read the morning paper and see the sun rise over cappuccino, croissants and some freshly picked strawberries?’ 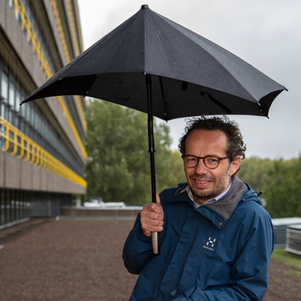 The Polderdak® (polder roof) is a concept developed by Metropolder Company (formerly Polderdak). The field lab Polder roof is a joint effort by Stowa, the Delfland Water Authority, Rioned, the municipality of Delft and TU Delft /VPDelta. The polder roof at TU Delft was realised with the support of EIT Climate-KIC to bridge the gap between academia and business, pave the way for upscaling and to eventually help bring innovative products to the market. The project also comprises the construction of various polder roofs in Italy. The polder roof forms part of the WaterStraat living lab for future proof urban solutions.