The sky is a pretty hectic place but most of the tumultuous goings-on pass us by. In order to gain a better insight into the atmospheric processes taking place nearer the ground, Frans Liqui Lung developed a simulation model showing small-scale interactions between sand and wind The resulting Master’s thesis earned him the title of Best Graduate of the faculty of Civil engineering and Geosciences.

Anyone who has ever taken a stroll on the beach is bound to have noticed the rippled structure of the sand beneath their feet, much like corduroy, or wavy crisps. Those ripples are a result of the wind transporting grains of sand over short distances. In turn these little sand structures influence the wind as well, says Frans Liqui Lung, who graduated this summer taking a Master’s in Applied Physics and Geosience and Remote Sensing. ‘The movement of the sand is speeded up by the wind but that same sand is also slowing down the wind as soon as it collects into tiny mounds. There’s a mutual feedback mechanism at work which is continuous.’

A combination of interests

The interaction between wind, sand and soil unite several of Frans’s main interests. ‘My favourite subjects in school were always mathematics and physics, and geology was the part of the geography lessons I liked best. When I went to an open day at TU Delft I found that all three subjects came together in Applied Earth Sciences and I decided that was what I was going to do. A few years later I did a minor in physics because I wanted to study for a Master’s degree in the subject later on. Once I had gained my Bachelor’s degree I did a Master in Applied Physics and in Geoscience and Remote Sensing.

Frans is particularly fascinated by atmospheric processes. ‘A lot goes on in the atmosphere but we see very little of it. We’re only able to tell something is happening if it takes place close to the surface, such as the formation of sand dunes or the wind whipping up the waves. Air currents are a hugely chaotic and complex things. They go up in one place and come down  in another. It is hard to get a grip on the extent to which the various atmospheric forces influence each other. We have been able to clarify much of the process using computers but it takes human knowledge to gain a deeper understanding of everything that is happening. I love finding out about the mechanisms behind the atmospheric chaos and complex air structures so I can make a contribution to our store of fundamental knowledge.’

Frans went in search of a subject for his thesis that would combine every one of his academic disciplines. ‘There was no project that immediately presented itself so I had to find one myself. I went to see Harm Jonker for inspiration because he developed a really cool model that makes wind and energy predictions for wind turbines. Then I thought: it would be even more fun if I could create a model to simulate mutual feedback, in other words, a model which predicts how the wind influences the surface and vice versa. That led me to sand transportation, which also chimed with my background in geology. I contacted Sierd de Vries, who is associate professor of coastal engineering and very knowledgeable on the subject, and that is how it started.’

Frans came up with the idea of developing a model which can predict the small-scale wind-borne transportation of sand while at the same time projecting the influence of the sand ripples on the wind. A pivotal role in this process is played by aeolian saltation. Frans:’Aeolian refers to a landscape that is formed by sand particles transported and deposited by the wind, either over a long or a short distance. Very fine particles, such as dust, can travel enormous distances high up in the atmosphere. The Sahara dust that you find on your car sometimes, is a good example. Bigger particles, such as grains of sand, don’t travel as far but make a series of jumps over a distance that can vary between two or three metres to dozens of metres. This wavy, jumpy transportation is called aeolian saltation.’

In order to develop the aeolian saltation model Frans had to buckle down and learn some new skills. ‘I wanted to create a digital simulation model reflecting a real situation. I have had years of experience programming but for this I needed to learn a whole new programming language. I spent at least ten hours watching YouTube videos to get to grips with it and adapt it for my purpose. I then had to put the thousands of lines of code representing the equations into the programme. The equations themselves were simple physical and mathematical equations but the sheer number of them made the programming process extremely time consuming. In the end it took me the best part of a year to develop the computer simulation.’

Simulating a variation of situations

The model allows Frans to calculate the forces at play between wind, sand and surface. ‘By applying these forces in a time frame of, say, two hours I can monitor what happens step by step. I can see how the sand is transported at a certain wind speed, where ripples start to form, what happens to the wind and the sort of interaction which occurs between the grains of sand and the wind. I don’t track every grain of sand individually: every grain represents a hundred thousand grains. By playing around with the input, such as wind power, wind direction and the amount of sand I can simulate a lot of different situations.’

The current model is a basic one, Frans emphasises. ‘It’s a very simplified version. Humidity, for instance, has not been factored in and we know wet sand behaves very differently form dry sand. But I think the model can help research into larger time scale events such as dune formation and desertification. This sort of research often involves making many assumptions. With a predictive model like mine, which makes short time predictions, you can make those assumptions more precise. There are models which predict smaller scale developments but then we are talking seconds or centimetres. The jump to years and kilometers would be too great. My model is about hours and metres and that makes it a good in-between model.’

Frans was given a double assessment for his Master’s thesis: a 9 for Applied Physics and a 9.5 for Geoscience and Remote Sensing. ‘I’m really happy about that and being elected Graduate of the Year makes me doubly proud. I didn’t see that coming. It has been great to combine my knowledge of three different fields in my thesis. And learning a new programming language has been an added bonus.’ 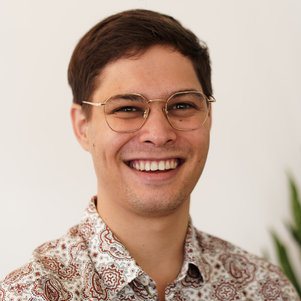 Best Graduate Election
According to supervisors Harm Jonker and Sierd de Vries, Frans showed exceptional research skills during the writing of his thesis. He also carried out his research with a rare measure of independence and originality, Jonker said. Frans made a number of new contacts which had not been available in the research group before and maintained these contacts by using the expertise present in both groups to the full while exchanging information with both. The assessment committee was deeply impressed by the presentation and defence of the thesis. Having won Best Graduate of the faculty of Civil Engineering and Geosciences, Frans will now be competing with seven other Best Graduates for the title of Best Graduate of TU Delft, the winner of which will be announced on November 17.