Getting to grips with land subsidence

While Femke Vossepoel’s husband and kids were choosing a Christmas tree she was busy typing up a research proposal about land motion. After a career at Shell, Vossepoel was determined to return to science. ‘In four years’ time we will have developed a prototype for a subsurface model which will give us a more accurate prediction of land subsidence resulting from natural gas extraction,’ she claims. As far as the government and businesses are concerned, it can’t come soon enough.

‘Once you have a clear idea of what it is you want to say you will have no trouble getting it down on paper,’ a friend told her. Vossepoel had two weeks to write a proposal in a bid to obtain a Delft technology Fellowship. If successful she would be able to fulfil a long-held wish to immerse herself once again in research, not just at any university but at her alma mater TU Delft where she obtained an MSc and a PhD at the faculty of Aerospace Engineering.

‘I was free to shape the proposal in any way I liked but I didn’t have much time. That helped me focus,’ Vossepoel says. She put down on paper how more accurate measurements of the surface would help our understanding of what was happening underneath through subsurface model improvements.

High performance supercomputers are capable of simulating subsurface processes increasingly accurately. At the same time, they can process the huge amount of data produced by the monitoring programmes. ‘That data is used to refine the models which predict land motion,’ Vossepoel explains.

When gas extraction risks are underestimated because of inadequate models thousands of people suffer the consequences first-hand. That is why both the authorities and businesses are keen to set up better monitoring programmes and construct fine-tuned models.

Vossepoel’s friend was right. Hers was one of the 10 proposals picked from among 350 applications. It has been a year since she started work at the Geoscience and Engineering department. ‘After a period of eight years it’s fantastic to be back doing research. I’m programming, doing simulations. My colleagues tell me: Femke, that’s what students are for. I know that but I enjoy it so much I want to do it myself!’

The research Vossepoel is conducting focuses on subsidence resulting from oil and gas extraction but the models are equally applicable to other causes of land motion. ‘Think of groundwater extraction and mining, for instance, or geothermic energy and gas storage. Or naturally occurring land motion caused by geological processes, such as compaction and tectonic shifts in seismic zones.’

Vossepoel can point to many areas around the world where a better model would map and ultimately limit the consequences of subsurface human activity. ‘Land motion, whether caused by human activity or natural processes, influences people’s lives and affects local economies in many places.’ That is one of the reasons the rules for environmental impact assessments in the Netherlands have been tightened. ‘Anyone wanting to engage in subsurface activities will have to be very clear about what will be done to prevent the land from subsiding, rising or shaking.’ And rightly so, says Vossepoel.

‘We need to treat the planet with respect. Human activities can influence the Earth system. I hope my research will contribute to minimise the footprint of human activities in the underground.’

‘The great thing is that data assimilation, the mathematical method that we are developing, can also be used by other disciplines. It is very common in meteorology and oceanography but it increasingly features in traffic control, urban drainage and medical image processing. And the financial sector is using it to predict stock market movement. It’s the application across the board that makes this research project so fascinating.’

Most of Vossepoel’s data comes from satellite measurements using reflectors. Two of the reflectors is situated at the offices of SkyGeo, a TU Delft spin-off company which is very interested in Vossepoel’s work. But it is not the only one. The Delft Associate Professor’s work has attracted a whole range of interested parties.

‘The economic affairs ministry, engineering firm Sweco, Shell, SkyGeo, the State Supervision of Mines. I talk to them all because I appreciate that they recognise the practical possibilities of my research. At the same time, I’m very clear about my independence: I want to freely publish my findings.’

Besides, Vossepoel says, it is not her main goal in life to provide companies with a software package which will help them limit the risks of their activities. ‘My intrinsic motivation has always stemmed from wanting to understand. The beauty of rock formations with particular faults, the wonder of the way fluids follow wonderful patterns: I want to understand how the Earth works. That is what drives me.’

Headerphoto: Femke Vossepoel standing next to the two reflectors at SkyGeo, a TU Delft spin-off company. The reflector is used for satellite measurements. 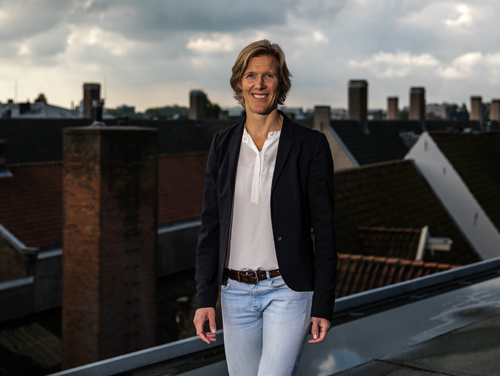 Maximising the yield of an oilfield