Playing a bass guitar on top of a dike. It’s not something you see a TU Delft scientist do every day. Yet this is exactly how Juan Aguilar-López tested his experiment on dike monitoring with the use of fiber optic cables. A technology which could greatly improve dike safety in the future.

Aguilar worked as a dam engineer in his home country Colombia before coming to the Netherlands. After doing both a PhD and his post-doc research on dikes, he has become a true dike expert. “Nowhere in the world the dikes are so robust and carefully designed as in the Netherlands.” Still, the almost 18.000 kilometres of dike that protect the Netherlands against the rising water levels need to be monitored closely. Weaknesses should be spotted and dealt with swiftly. An answer for this could be Aguilar’s research into the use of fiber optic sensors to measure dike stability. A fiber optics-based sensor can measure the water pressure and detect breaches in a dike. Crucial information in the prevention of floods. 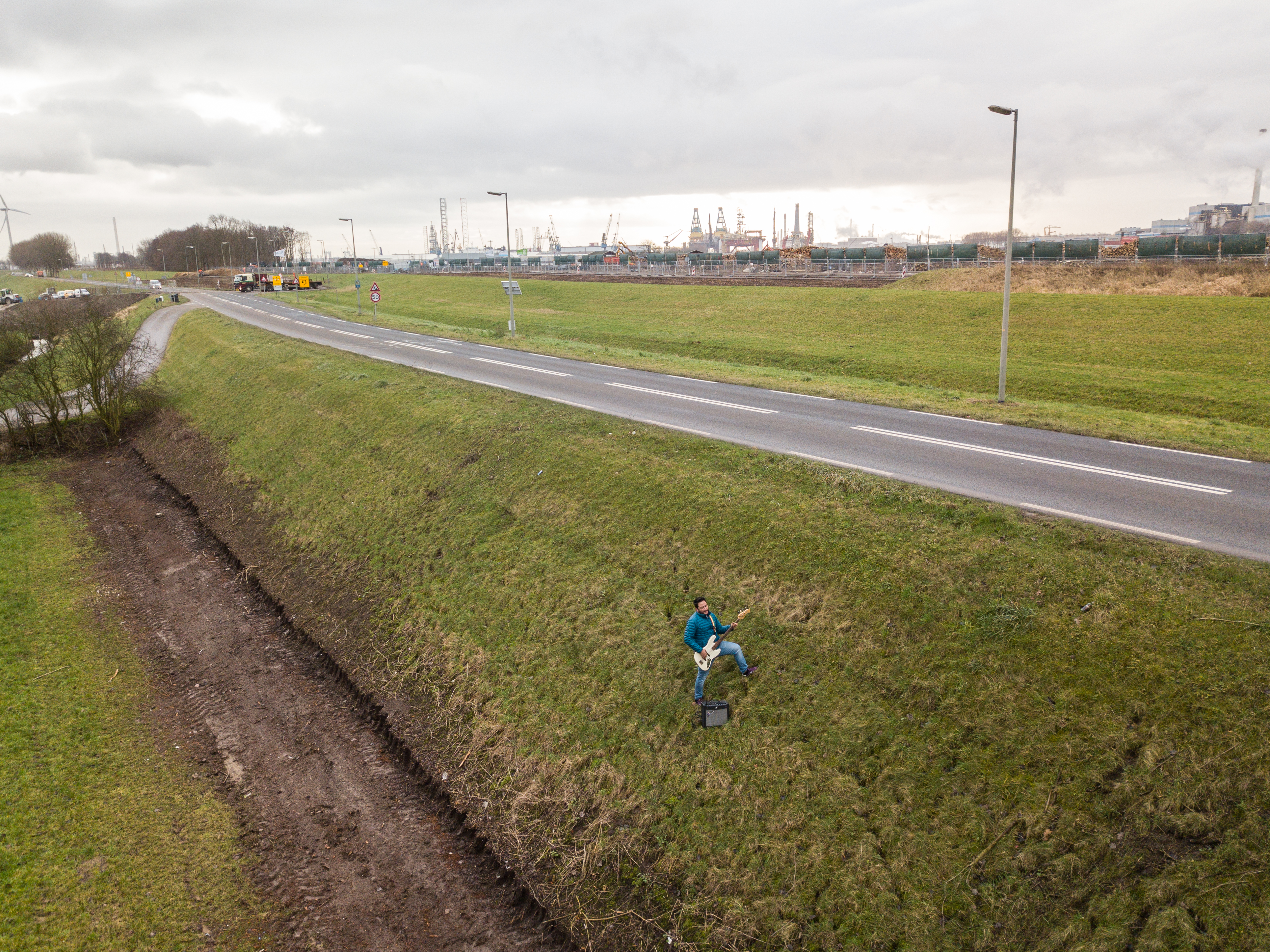 Using sound to see inside the dike

Aguilar explains how this works: “Fiber optics is all about light. You have a cable, light shoots through it, it gets reflected and then a machine processes this information. The cable is very sensitive to changes in temperature and strain. The idea is to exploit these features.” The main focus of Aguilar’s research group is to develop innovative fiber optic based monitoring techniques to determine the water pressure inside a dike. So, to measure this based on the strain on the fiber optic cable.

After a visit to the lab in Spain a new idea took hold. “We discovered that the electronic engineers in Spain had also developed great technology to capture sound. Sound is a vibration that travels in the form of a wave. And if it reaches the cable, it also vibrates. It is almost like having a microphone.” Aguilar wanted to find out if measuring soundwaves in the dike would give him information about the water content of the dike’s soil. “Measuring sound in soil is not new, it has been done in the past. But not for dikes with fiber optic cables.”

To test his idea Aguilar set up an experiment at Flood Proof Holland, an outside lab close to the TU Delft campus. “The good thing about this lab is that we can flood dikes without making a catastrophe. Without flooding the Netherlands,” Aguilar says jokingly. Together with his colleagues he placed 140 meters of fiber optic cable into a ten centimetre deep trench along the artificial dike. “The most important thing is that the cable and soil couple really well, otherwise you will not capture the vibration.”

This proved to be a challenge. “We had the driest summer in the last hundred years in the Netherlands. So instead of the soil ‘eating’ the cable, it started opening up. As a solution I had to water the dike with a watering can. People were making fun of me and said: ‘are you growing cables?’”

To measure soundwaves Aguilar first needed to create vibrations in the dike. He would either hit the dike with a hammer, use passive measurement by recording the environment’s natural vibrations and as a third method an expensive machine, capable of generating controlled sets of vibrations, was flown in. But, in the week before the experiment this machine had not arrived yet. This is where the bass guitar came in. Using this unorthodox vibration source proved to be a great way to test which frequencies could be used best during the real experiment. “It was amazing. We could detect in the cable which note I was playing.” 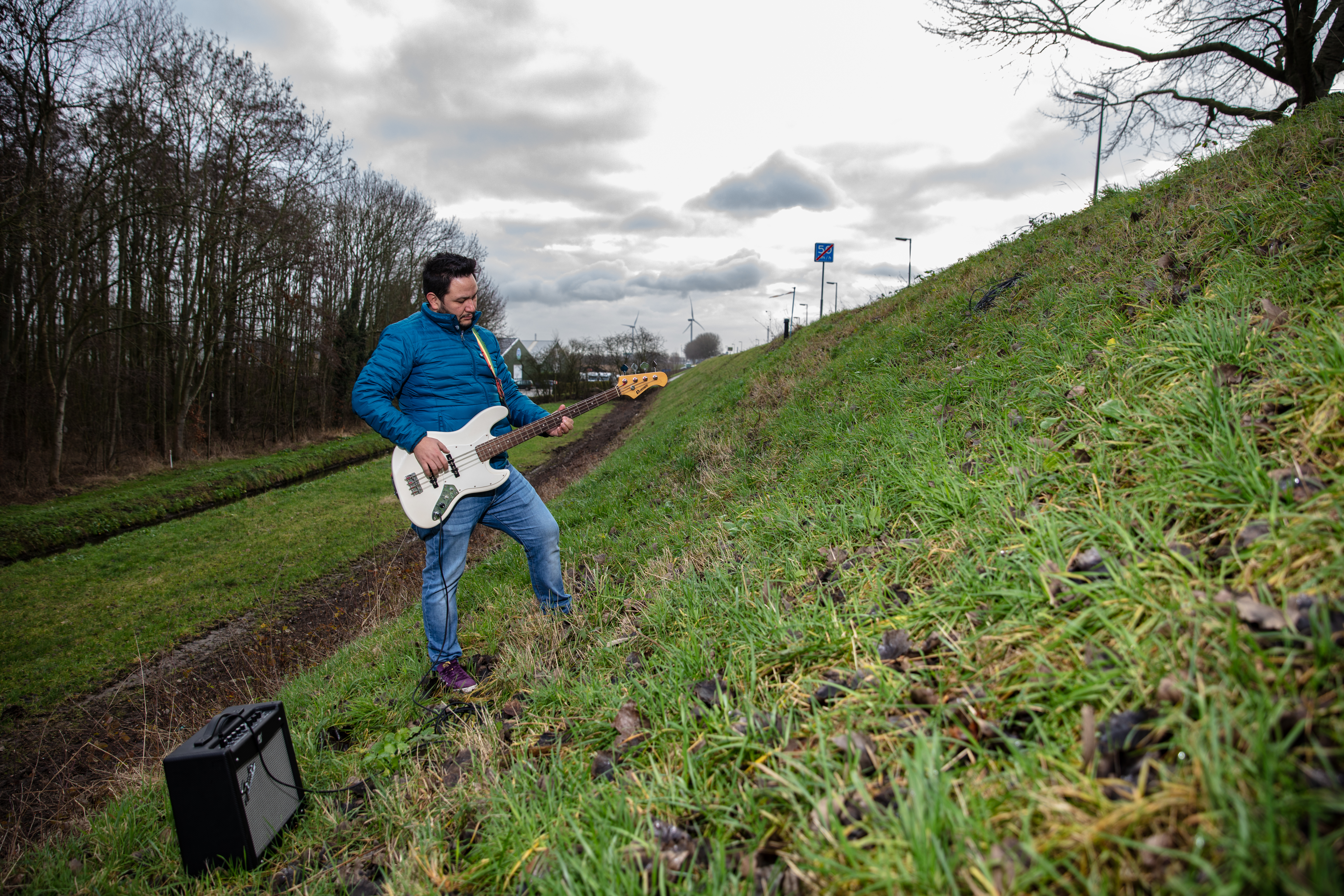 From soundwave to model

One week later it was time for the real deal. Aguilar measured the different vibrations while flooding the artificial dike three times in five days. Based on this data and the numerical model he made of the water content inside the dike, he concludes that his experiment was a success. “I need to do more post-processing to plot exactly what is happening inside, but this experiment showed recording sound works with dikes. This is very exciting.”

‘Humans cannot see inside a dike’

Aguilar is a strong advocate of the advantages of fiber optic sensors. “It is a very non-intrusive technology. You don’t have to drill a hole to place the cable. Holes make the dike weaker and you don’t want that.” Perhaps the best feature is that it allows for continuous measurements over long distances. Now, our dikes are monitored with sensors placed about every half kilometre. “When you deploy a fiber optic cable it is as if you have a lot of sensors in a line. If you put a sensor every hundred meters whatever happens in between is lost.”

Dikes are also monitored the old-fashioned way: by people going up to the dike to visually check for defects. “But,” says Aguilar, “humans cannot see inside a dike. With this technology we will be able to predict pressure and deformations, without sending anybody to the field. A machine will just tell you; ‘go to kilometre seven of the dike because there is something going on there.’ More research is still needed, but we now know it will work.” 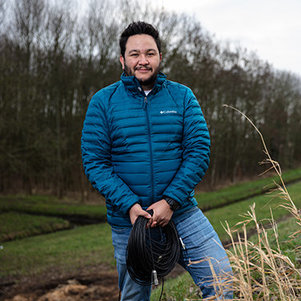 Aguilar’s post-doc research is part of project DOMINO. A project, funded by the European Commission, which aims to develop new ways to use fiber optic sensors in the monitoring of dikes and debris flows in mountainous regions. This international research group is a collaboration between TU Delft, the University of Alcalá in Spain, the University of Padua and the Research Institute for Geo-Hydrological Protection (CNR-IRPI) in Italy. The TU Delft team is led by hydrologist Thom Bogaard of the department of Civil Engineering and Geosciences.