In ten years’ time the methods used to recycle plastic and electronic waste will be completely transformed, predicts Peter Rem, professor of Resources & Recycling at TU Delft. The recycling plants of today, with their huge sorting areas and big separation installations, will have been replaced by distribution centres for recovered raw materials which can be made into high-quality products.

It’s not something you would stop and think about very often but a yoghurt pot is really quite a sophisticated product. ‘Its walls need to be very thin to minimise weight,’ Rem says. It also needs to be impervious to gases and UV light because these will spoil the yoghurt. Considering all these packaging requirements, we are actually looking at a very advanced product, and one that is fundamentally different for each use, whether it be packaging for yoghurt, meat, spring water or beer.’ The Netherlands uses around 40 euros’ worth of plastic packaging per head of the population. Despite the best efforts of consumers and waste processors, recycling only recoups one to two euros in recovered raw material.

‘Some 250 different plastics are used in packaging but at the moment we can only separate these into four or five broad categories of polymers, such as polyethylene and polypropylene. Once recycled these are only fit for low-grade applications and there are not too many of those about,’ Rem explains. In other words, that yoghurt pot could be recycled to make a coat hanger or a builders bucket but would no longer be suitable for packaging food. And as more and more European countries are recycling plastics, the market value of recovered raw materials will continue to plunge. That is why, in an ideal world, we would like to separate plastic waste into as many as fifty to a hundred different raw materials.

But that is easier said than done. ‘Separating plastic packaging into four kinds of plastics alone would take twenty machines. To separate it into fifty you would need a monster installation with hundreds of machines. It simply wouldn’t be feasible.’ And yet the food and beverage industry is bent on achieving 100% recyclability of its packaging. That has everything to do with consumer attitudes on sustainability. ‘Most people have mixed feelings about plastic packaging. On the one hand they appreciate the increased food safety it brings but on the other they see that it leaves us with something big, empty and harmful. If all that packaging could be recycled properly consumers wouldn’t have a problem with it.’

The next few years may very well bring 100% recyclability within reach. Rem is heading a Perspective programme financed by national research organisation NWO in which universities and businesses work together to develop an affordable and energy-efficient technology to recover valuable raw materials from waste. It will be based on Magnetic Density Separation (MDS), which separates waste according to density by means of a sink-float method. The electronic and plastic waste is shredded into small particles which are put in a bath of ferromagnetic fluid. Specially designed magnets are then used to change the density in the fluid, so the particles will start to float at different levels according to their density. 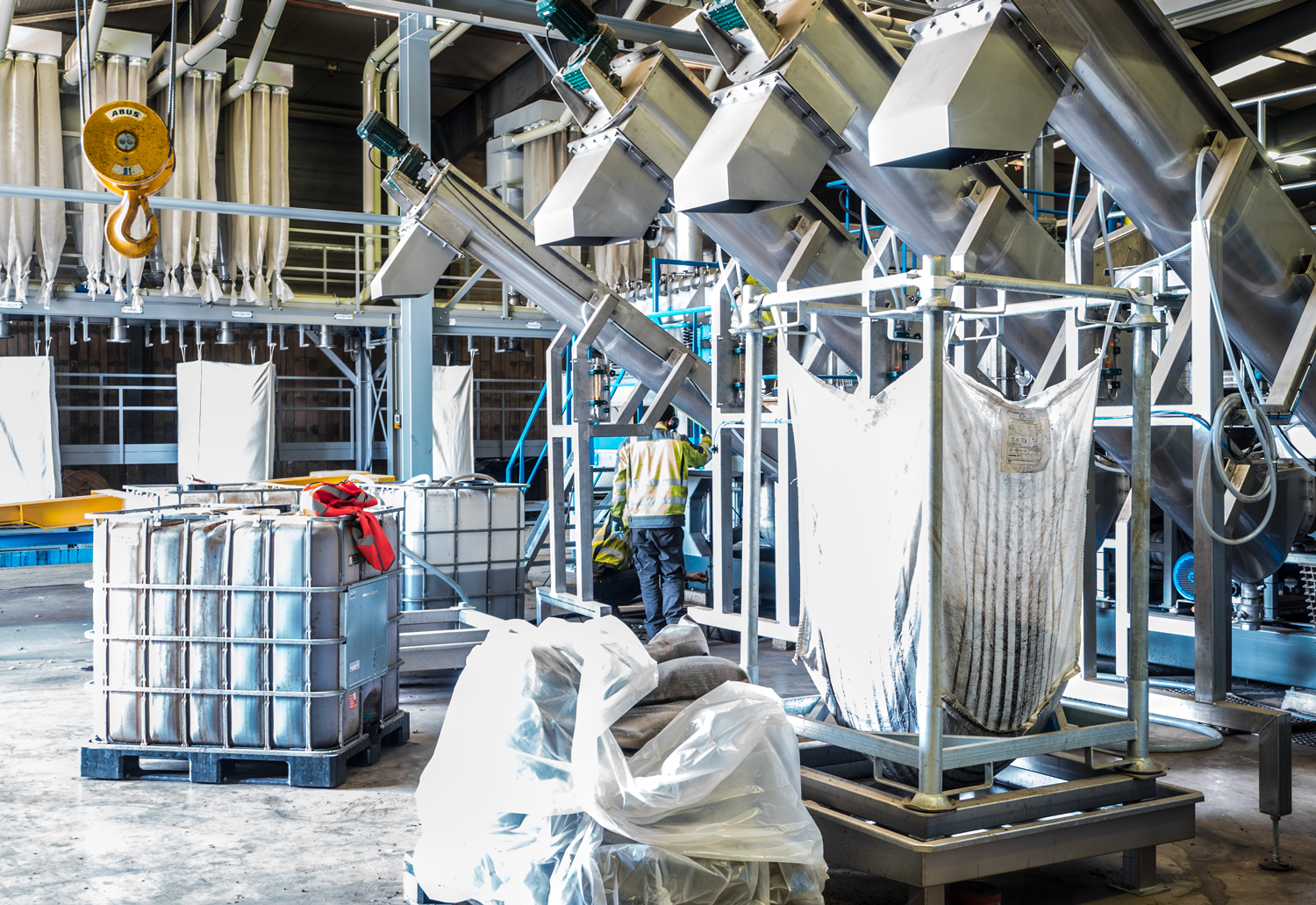 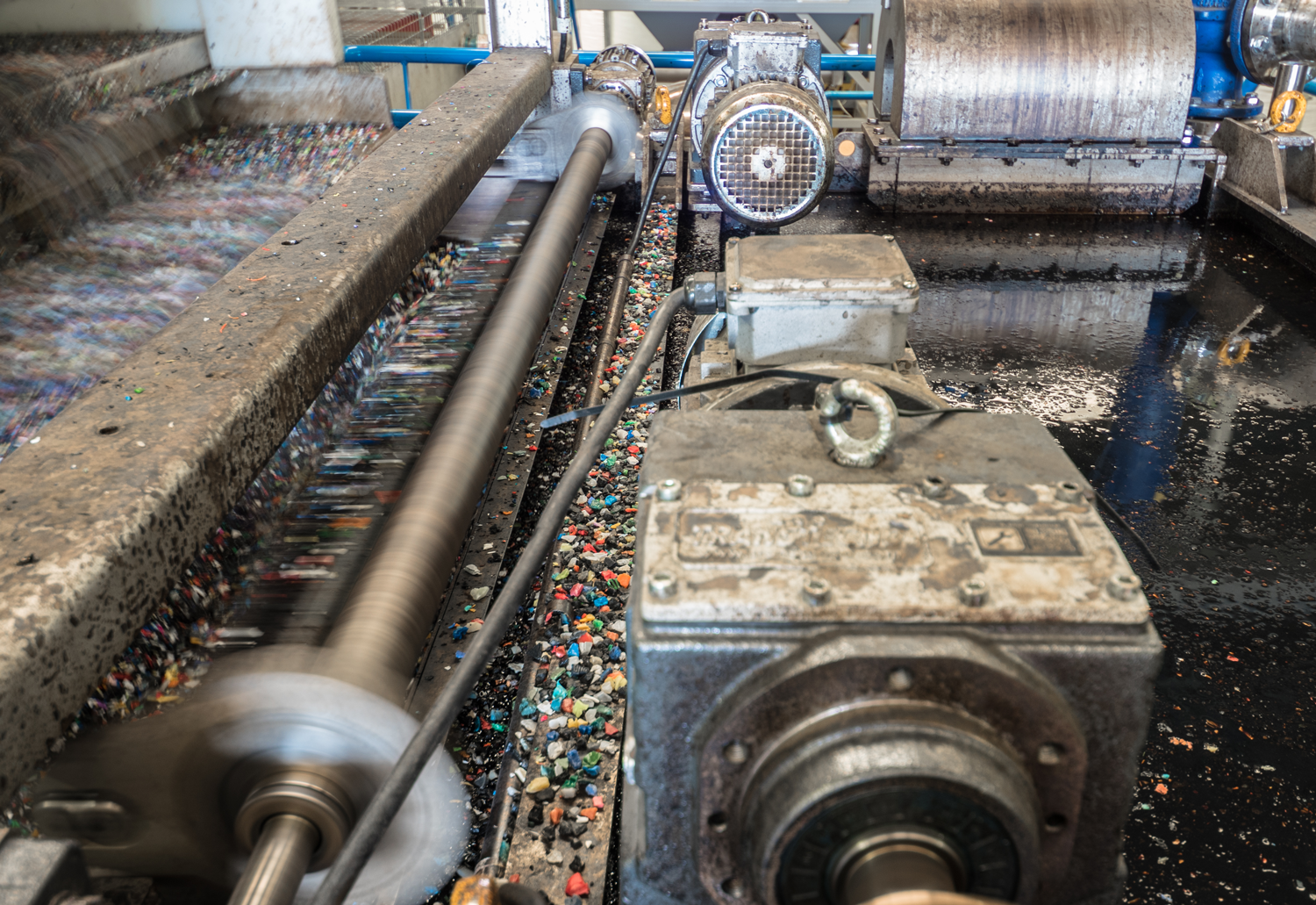 MDS is not new. The patented technology was conceived and developed by Rem and his colleagues some ten years ago. The Urban Mining Corp (UMC), of which TU Delft is a shareholder, is bringing the technique to market. Biddinghuizen is home to an installation which can process twenty thousand tonnes of plastic a year, or a whopping sixth of all Dutch plastic waste, in a single process step. But Rem wants to take the technology much further. ‘We based that machine on traditional physics at the time,’ he says. ‘Now we have four universities helping us by bringing the latest in physics and technology to the process.’

There is fluid flow for a start. ‘At the moment turbulence is tempered by a grate, which is a very simple solution. TU Eindhoven is concentrating on increasing the laminarity of flow,’ Rem says. This will make it easier to control the floating particles. The latest generation of superconducting magnets helps to fine tune the process as well. ‘TU Twente is going to develop superconducting magnets which will divide waste into ten or fifteen material streams instead of only five.’ Utrecht University’s expertise is in nanofluids, such as the ferromagnetic fluid used to separate particles according to density. ‘They can produce a made-to-measure fluid with exactly the right properties for the process.’ However, intense magnetic fields can cause fluid instability, which is where the Radboud University in Nijmegen comes in. ‘The Radboud  has magnets of every conceivable strength in their high field magnet lab, which provides us with an excellent testing ground for the fluids.’

Apart from the improvements to the MDS process, the team also aims to develop a technology to separate plastic flakes according to colour by means of sensors. ‘It is impossible to remove the dye added to plastic. You can’t turn red or green into white,’ Rem says. It is much like recycling glass in this respect, but there is more. ‘By sorting according to colour you also sort according to other properties. Detergents often come in white bottle, for instance, so consumers can see straight away which isle to head for. In the same way the bottles contain additives/additional elements which make them suitable for carrying detergent. So if you have separated the polyethylene and then go on to pick out the white flakes, you can be pretty sure you have got hold of the ones used in packaging detergent. Based on what the sensor detects we want to lift exactly the right flake off the conveyor.’

Again this is not as easy as it sounds. In order to sort a 20,000 tonne per year waste stream you would have to colour sort 10,000 flakes every second.’ Waste sorting according to colour is already common practice but the process is far from effective. ‘The current technique consists of a camera which is suspended above the conveyor.  Based on the images, a number of small air cannons positioned at the bottom of the conveyor blow out around 85 percent of the white flakes from among the rest. But at the end of the day all you have done is separate the white flakes from the non-white flakes. And you will not end up with an all-white stream because today’s sensor separators cannot weed out every single non-white flake.’ Rem’s goal is to ultimately separate the plastic flake stream into five separate colours uncontaminated by different coloured flakes. ‘When the camera has detected the colours you can moisten flakes of a certain colour so they become slightly sticky and then pick them off the conveyor. But it has to happen at a speed of 10,000 flakes a second. We have shown that this can be done without disturbing the other flakes.’

To achieve this Rem and his team have been developing a sprinkler system which can produce half a billion drops per second. The trajectory of each drop – straight down or curved -  is decided separately. ‘What we are working on now is a 1/25e scale model of the sprinkler which is already producing as many 100,000 drops per second from each hole. In actual fact it is a glorified garden sprinkler,’ Rem says. But what it resembles most is a printer system ‘Some printers build an image from tiny drops of ink, often based on huge amounts of information. In order to make half a billion decisions per second you need to send half a billion bits to the sprinkler or print head. It sounds pretty fanciful but with the technology we have it’s perfectly feasible.’ 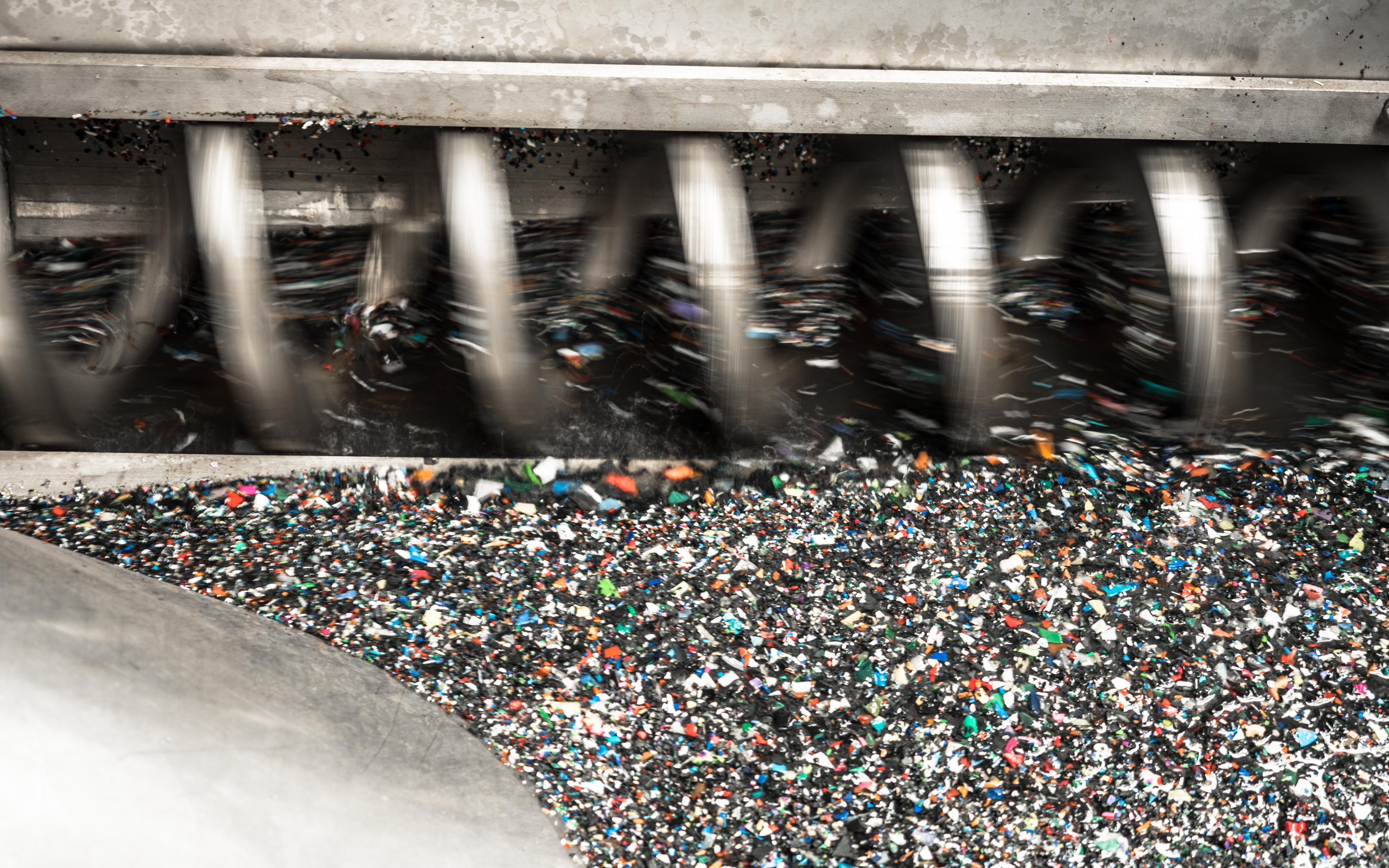 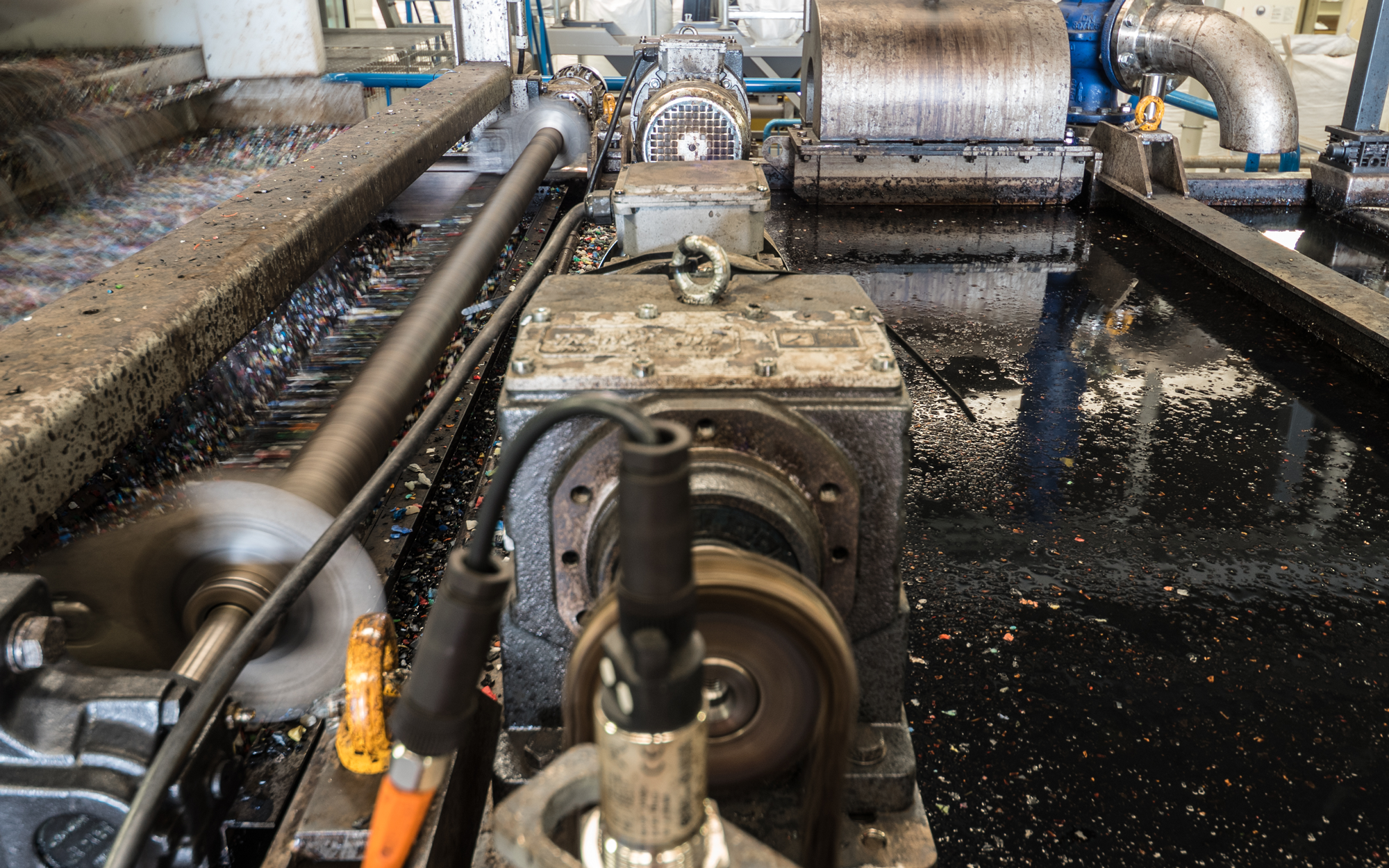 The process is equally effective for recycling electronics. ‘Electronic waste presents us with a similarly complex problem of hundreds of materials put together in small scale objects in combinations that are not easy to disentangle.’ This opens new perspectives, for instance, when recycling indium, or other rare raw materials. ‘Touchscreens contain indium tin oxide, a very special type of material because it’s both transparent and conductive. Indium is scarce and in order to recycle it we need to distinguish between the indium and the glass.’ It would not be much use to go by colour in this case since both materials are transparent. But by using infrared sensors we can establish the specific reflection spectrum of each material. Then all you have to do is remove the different particles separately from the conveyor. Not a problem, Rem says. ‘If you can make it wet, you can recycle it.’

Rem has a clear idea of what the future of recycling will look like: ‘You start out by separating waste streams according to ten degrees of density which are stored in ten silos. Then you start to separate the materials one silo at the time using the sensor system. That will result in a very precise separation of materials using only two machines: the MDS and the sensor machine. Instead of a complex sorting area you will end up with a storage area managed with smart logistics. ‘The programme is aimed at creating a working prototype that can be used by the industry. That does not mean society will immediately reap the benefits. ‘The technology can be a breakthrough but that doesn’t mean things will automatically turn out fine. Society will have to gear up for the system. That is why I am happy that so many different sectors are willing to work together in this project.’

Apart from the five universities the project has also secured a partnership with a number of businesses which together contribute a million euros for research purposes. The amount comes on top of the two million in subsidies from the NWO division Applied and Engineering Sciences. Some of the businesses involved are working on the development of superconducting materials. ‘At the moment these are only used in niche segments of the market. But they are hoping that superconductivity will become a mainstream technology and this is an opportunity to make that happen,’ Rem says. The food and beverage industry is represented via the Dutch food producers association NFLI. ‘That is a very important partner. Their members are the ones to reuse the plastics for their packaging and it is up to them to tell us what the requirements are.’  The project is also supported by the big recycling companies, including, of course, Urban Mining Corp. ‘There are many industries who want to use this technology to take the next step towards the future.’ 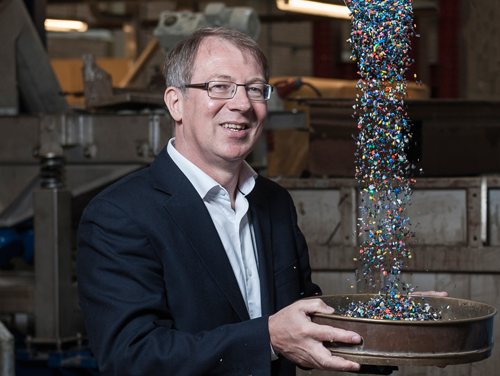 Read all stories of the department Engineering Structures >