The clay tablets with cuneiform writing from the museum in Raqqa in northern Syria have been destroyed or plundered. But a lot of valuable information can be saved by making 3D scans and prints of moulds that were made before the war. Dominique Ngan Tillard, geo-engineer at TU Delft, often works with archaeologists. She uses micro CT scans to create images of the insides of objects. And now she can try to do the same with the Syrian clay tablets. 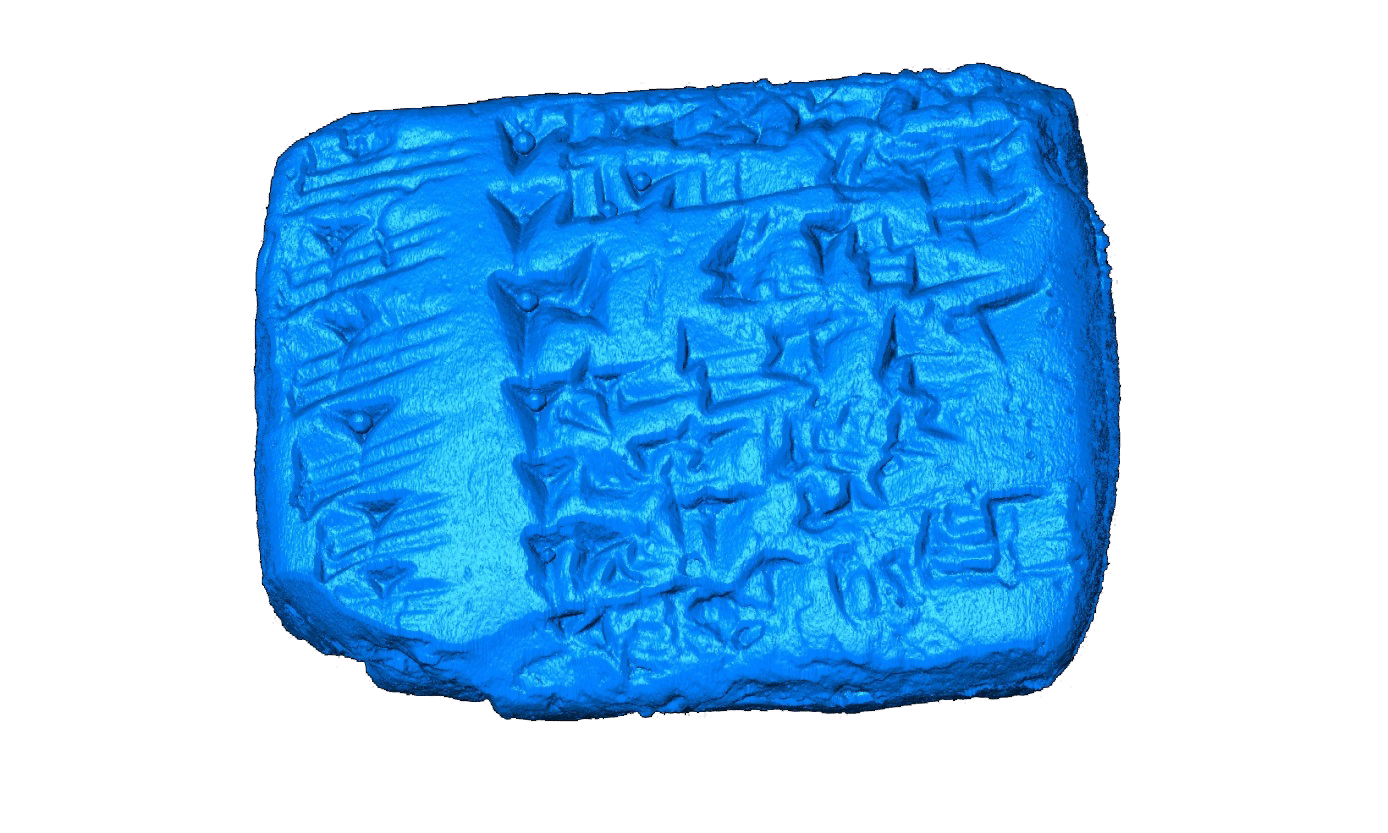 The archaeological museum in Raqqa in northern Syria was heavily plundered by IS, who took control of the city in 2013, declaring it the capital of Islamic State. ‘It is the only museum in Syria that is in such a poor condition’, says Leiden-based archaeologist Olivier Nieuwenhuijse, who is also active in the Leiden-Delft-Erasmus Centre for Global Heritage and Development. ‘Other provincial museums in Syria were able to take their collections to the capital of Damascus, but no one had predicted how quickly Raqqa would fall.’

Heyday of the Assyrian Empire

The museum's collection included clay tablets with cuneiform writing and glass beads dating from around 1200 BC. This period was the heyday of the Assyrian Empire. From their capital cities in northern Iraq, they governed the Syrian province. All of these places have been seriously damaged by IS. The objects were excavated by Dutch archaeologists at the Tell Sabi Abyad site in the Balikh valley to the north of the city. This valley used to be the Western border of the Assyrian Empire, with the Hittites on the other side and the Egyptians further south. The Assyrian officials at Tell Sabi Abyad checked all the merchandise traded from and to Syria and created vivid reports on the clay tablets. The archaeological work of decades has now been destroyed or stolen.

‘At the moment, it is not possible to go back there’, says Nieuwenhuijse. ‘But equally, we cannot just sit and do nothing.’ The Syrian Directorate-General of Antiquities and Museums in Damascus has already called on Dutch archaeologists to help where they can.

The ‘Scanning for Syria’ project is one way of providing that help. Nieuwenhuijse is collaborating on the project with two scientists from TU Delft: geo-engineer Dominique Ngan Tillard and industrial designer and 3D print expert Jouke Verlinden.

It is impossible to make virtual reconstructions of something that no longer exists. However, unaware of the impending war, archaeologists created silicon moulds in Syria that they brought back with them to the Netherlands to make plaster casts. These moulds are what gave Nieuwenhuijse the idea.

Fortunately, the plaster casts had not yet been made, he says. ‘They damage the moulds and the result is a bulky plaster object with bubbles in it that goes straight into a drawer. A scan can be sent across the world by email and processed on your computer.’

‘We can also do that in Delft, and do it better’, said geo-engineer Dominique Ngan Tillard, when Nieuwenhuijse told her that he had had test scans done in Paris. They met each other at the Centre for Global Heritage and Development. In her day job, Ngan-Tillard uses various techniques to analyse the microstructure of soil in road and hydraulic engineering projects. She often works with archaeologists, not only at archaeological sites (or potential ones), but also in her lab. She uses micro CT scans to create images of the insides of objects. ‘They are the same scans as in hospitals, but with much a higher resolution.’

The three started on the clay tablets. It was certainly no easy job. Ngan Tillard: ‘I have to correct the scans for imperfections in the moulds and am now in the process of filtering out the air bubbles. For me, the big question is this: how good will the scans of the moulds actually be, compared with scans of real clay tablets?’

‘All sorts of things could go wrong’

Jouke Verlinden, 3D printing expert in the TU Delft faculty of Industrial Design Engineering, set to work on the recipes provided by Ngan Tillard. Droplet by droplet and layer by layer, he built up the clay tablets using a special printer of which there are very few in the Netherlands. It is an extremely high-precision printer – with a layer thickness of 0.012 mm – that is capable of mixing several colours and materials.

Verlinden has made prints of clay tablets before, from the Rotterdam World Museum, featuring the world's oldest recipes. ‘But this case is different, because we no longer have the originals’, he says. ‘That makes the workflow quite complicated. You start with a print of the object, before creating a counter-mould, which you then print. All sorts of things can go wrong.’

Then came the test. It must be possible for the tablets with cuneiform writing to be read and studied. This is done by Assyriologists.

Nieuwenhuijse showed the tablets to several Assyriologists: ‘Their first reaction was to gulp and say: “we can't work with these”. The tablets were actually turquoise blue and shiny. But after looking more closely, they concluded: ‘The information is in there. There is some loss of resolution, but we can still read them.’

Verlinden: ‘It is very important how you hold and move this kind of tablet when reading it, with a light focused on it.  They are written in bi-directional script that runs from left to right and then from right to left again on the next line.’

‘Of course, I can make all kinds of tweaks. I can print the tablets in brown if I want. But I have always been inclined to make this kind of print look really different, to create a kind of culture shock. Usually, it takes around half an hour before you know whether or not it will work.’ The new prints are no longer shiny, says Verlinden. ‘That is something that is quite difficult to achieve with the type of plastic we use.’

What started as a project for Syria is now taking on new dimensions, since research inevitably leads to new research. Ngan Tillard will systematically compare scans of clay tablets from the Dutch National Museum of Antiquities in Leiden with scans of silicon moulds of them that she is having made specially. A student of digital archaeology in Leiden is also investigating the factors that play a role in evaluating virtual reproductions, with a view to developing a series of recommendations.

What is more, this is not just about one or two objects, but an enormous collection, and the moulds from Syria will not last forever. They are already beginning to develop cracks and are shrinking. ‘Verlinden: these are genuine time capsules that need to be digitised as soon as possible.’

The three scientists are now developing ideas on how to upscale this work to some kind of gold standard for digital records. This is not only for Syria, but also for other places where heritage is under threat. Ngan Tillard intends to make the digital data she provides available through the 4TU.Centre for Research Data,an initiative of the four Dutch universities of technology.

They are also applying for funding for an exhibition about this world heritage from northern Syria. It will feature the prints themselves and there will be computer activities for visitors. All three believe that it is extremely important that the objects are brought to life for the general public.

It is hoped that this exhibition will ultimately also be seen in Raqqa. Nieuwenhuijse: ‘We should not forget that this archaeological research has been made possible by all the Syrian farmers who took care of us, invited us for meals, and made sure our cars could drive again when they had a flat tyre. They are full of admiration for the work of archaeologists, both Syrian and Western. They have very wide interests and are not just interested in Islamic heritage. That is a myth. During our research into prehistory, we never encountered any opposition at all.’

Reuters made this video about the ‘Scanning for Syria’ project 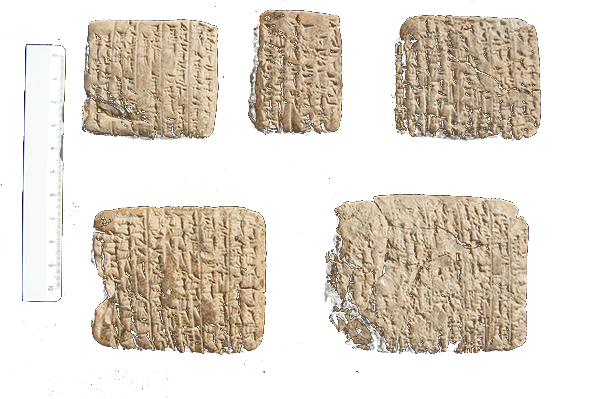 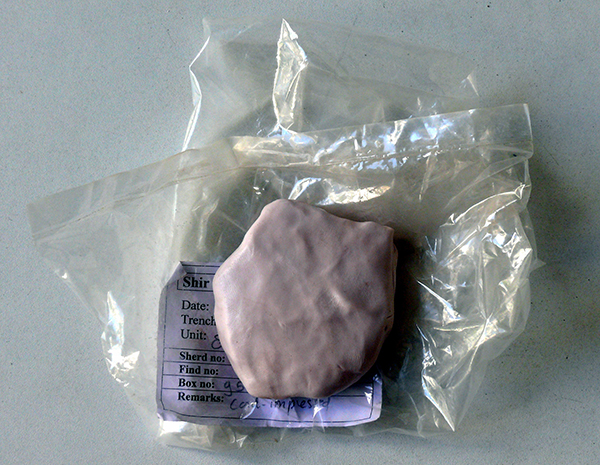 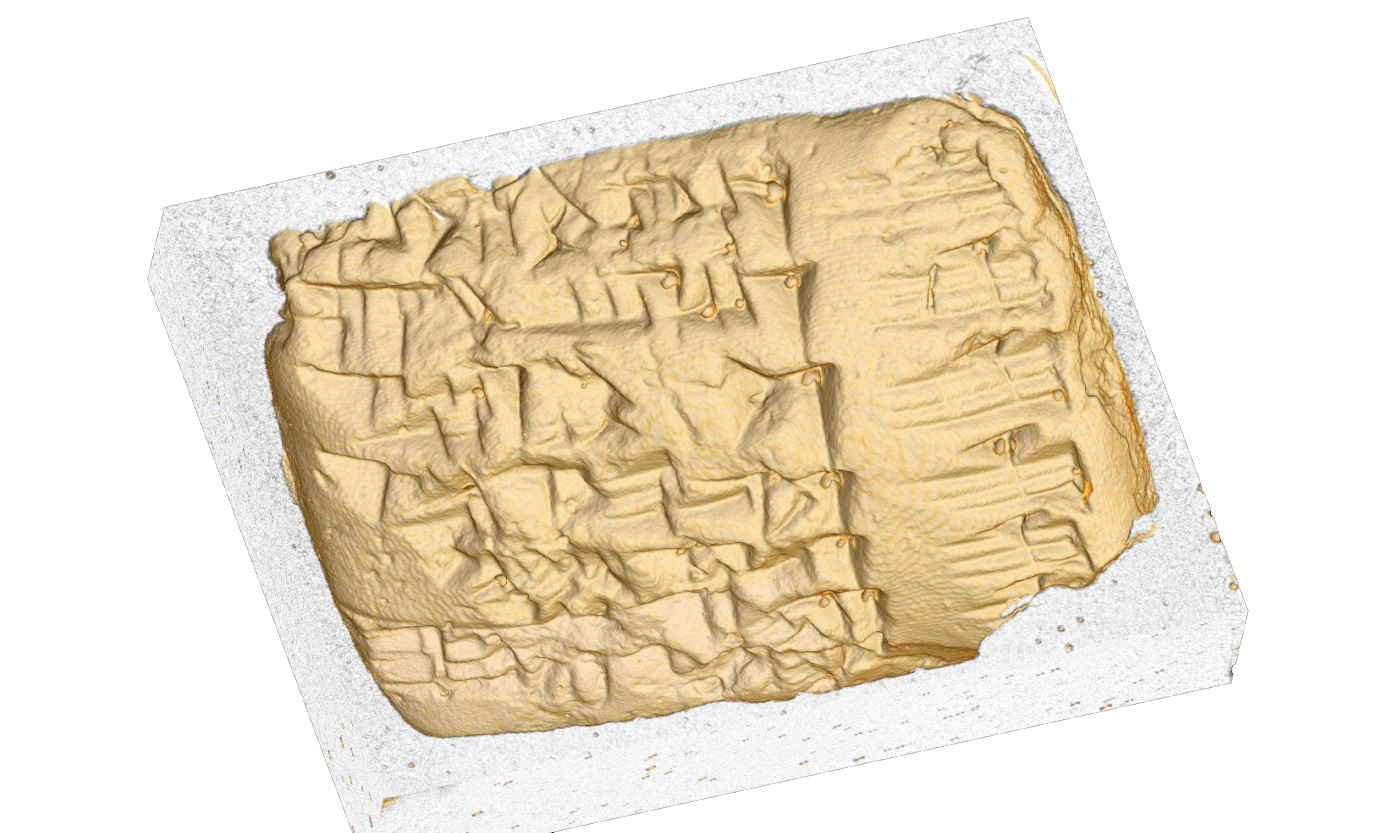 Virtual reconstruction of clay tablet. The Assyriologists' first reaction was: 'We can't work with this' 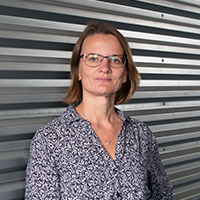 Can a micro-CT scanner produce a legible image of a cuneiform tablet in an unopened envelope?