The canals and quaysides in historic cities such as Amsterdam, Delft and Utrecht make a pretty picture. In order for these often busy cities to remain safe, the quay walls, some over 300 years old and built on wooden piles, need to be well maintained. But which ones to tackle first? And which quay walls still pass the test? PhD candidate Mart-Jan Hemel is investigating the condition of these centuries old quay walls by doing exactly what the local authorities are trying to prevent: put pressure on them until they collapse.

At first glance the former Zuidergasfabriek terrain in Amsterdam looks a bit like a construction site. And yet from the end of February until mid April the old dock on the Amstel will be the scene of a very important experiment, Mart-Jan Hemel says. ‘We will be able to determine here how much pressure quay walls can take before they bulge or collapse. It is, of course, impossible to conduct tests like this in the city centre. That is why the council has found us a piece of derelict land to use as an open air lab. In a few years’ time there will be office blocks here, and apartments.’ 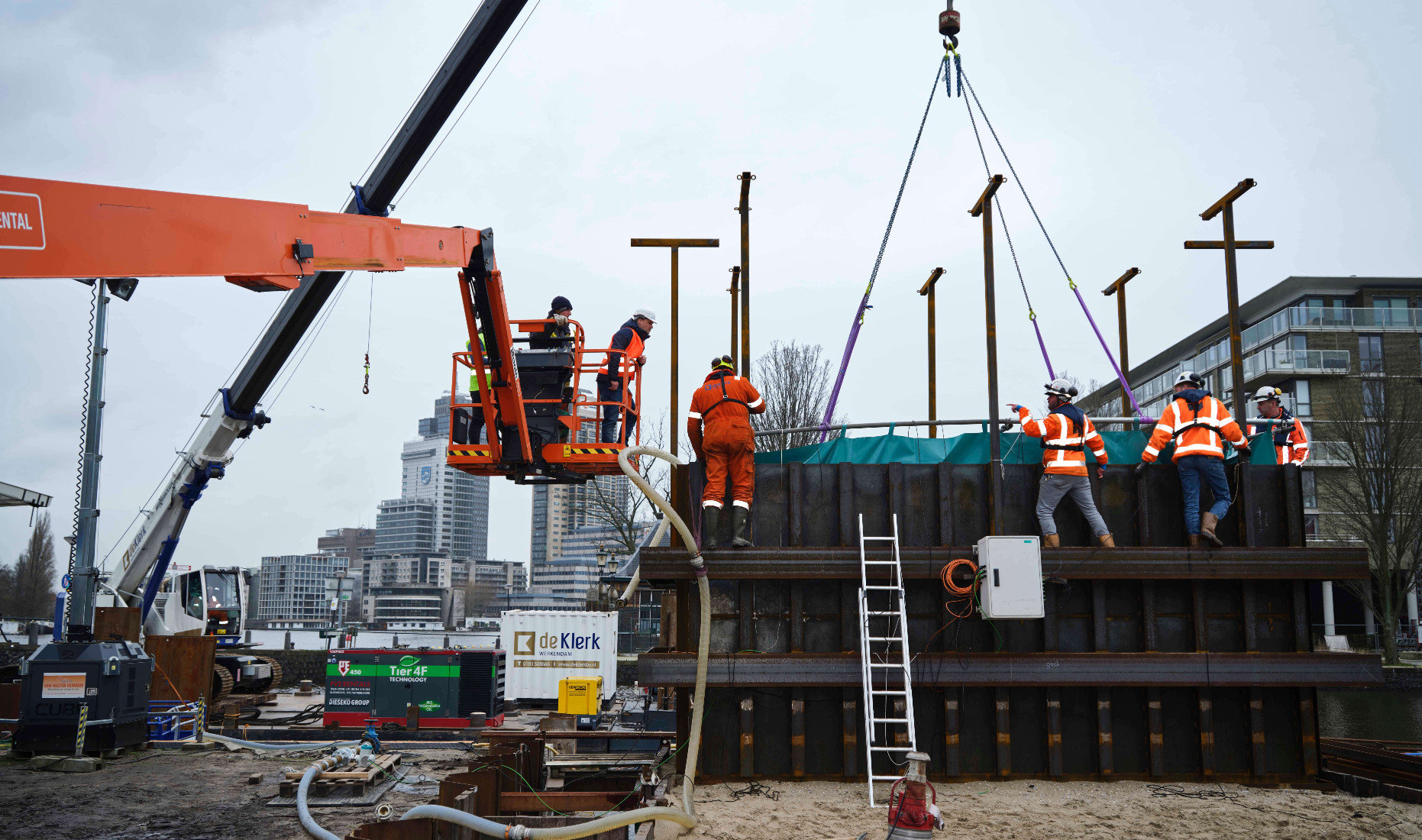 It is no coincidence that the experiment is taking place in Amsterdam. The capital has a whopping 200 kilometres of quayside, all built on wooden piles. Due to their great age, proper documentation is often missing. It is not always easy to pinpoint the weak spots , or deternine how long a construction will last without intervention. ‘In 2020 the quay wall of the Grimburgwal, which is privately owned, collapsed into the canal over a length of 30 metres, creating a potentially dangerous situation. Amsterdam city council has an ongoing programme of strengthening quay walls and shoring up potential weak spots but wants to prioritise intervention based on more precise information.’ 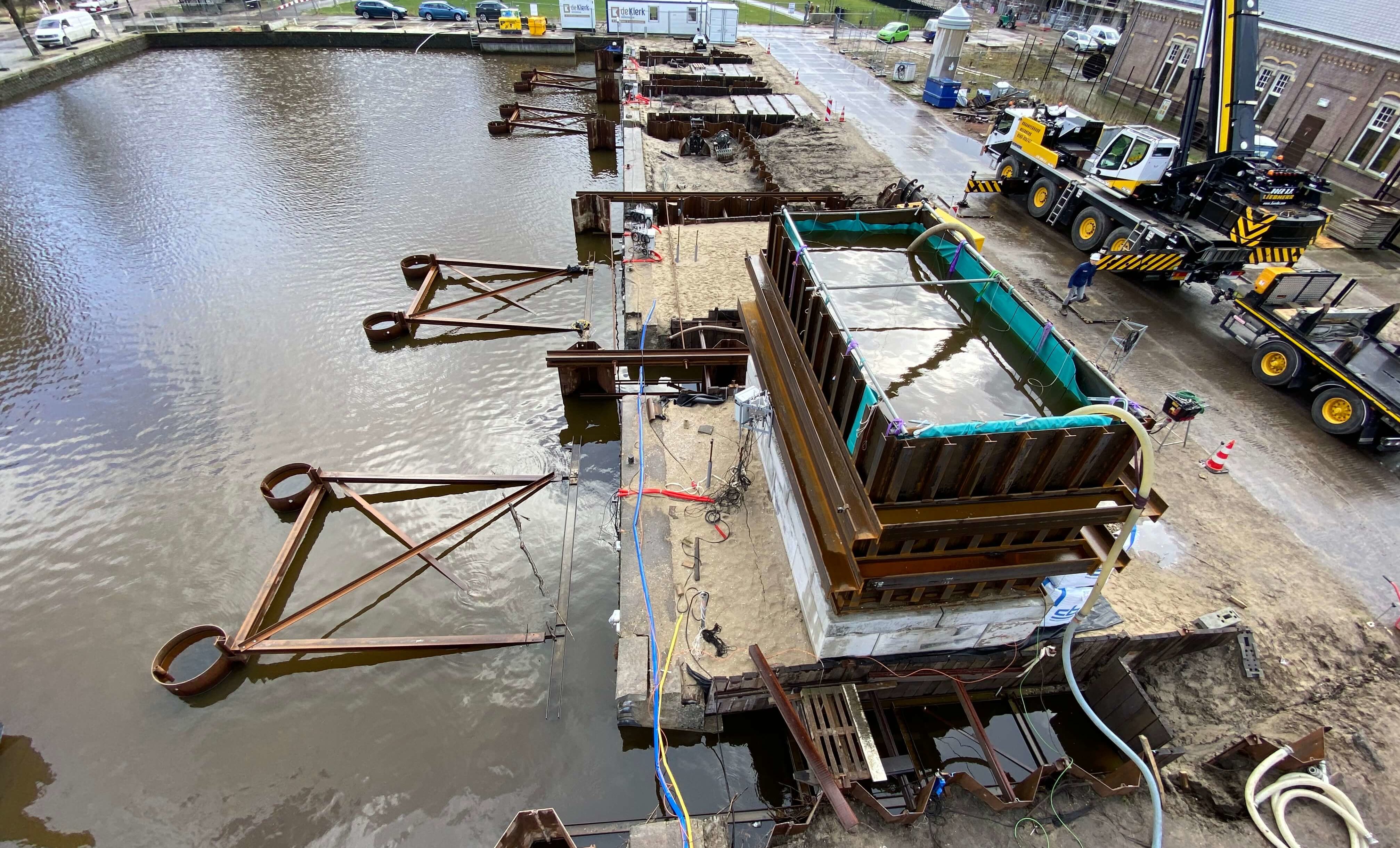 In order to predict how damage to the quay wall develops over time more data are needed, Hemel says. ‘Hard figures will tell you if a quayside is due for a repair job. Subsidence risks cannot always be spotted with the naked eye, but, at the same time, bulging or cracking does not always mean the quay wall is on the point of collapse.’
The experiment on the Amstel will give Hemel the data he needs to make better predictions. The civil and hydraulic engineering engineer developed a model which provides an insight in the stability of quay walls. ‘It consists of mathematical equations and physics formulas. By feeding data into the model – such a soil type, the number of wooden supports the wall is resting on or the pressures acting on it caused by traffic or concrete blocks – you can calculate how long a quayside will remain stable.’

With this model of mathematical equations and physical formulas you can estimate whether a quay needs repair.

But before it can be used the model needs to be calibrated and validated, Hemel says. ‘That is why we need to do the experiment. The results will tell us if my theory-based suppositions are compatible with what happens in practice. It may be that my model predicts an expansion of 5 centimetres under a given pressure but that in practice the wall expands by as much as ten centimeters. If that is the case I want to know what is causing the difference. It may be that the input is incorrect, or that I have to add certain processes and parameters to the model.’ 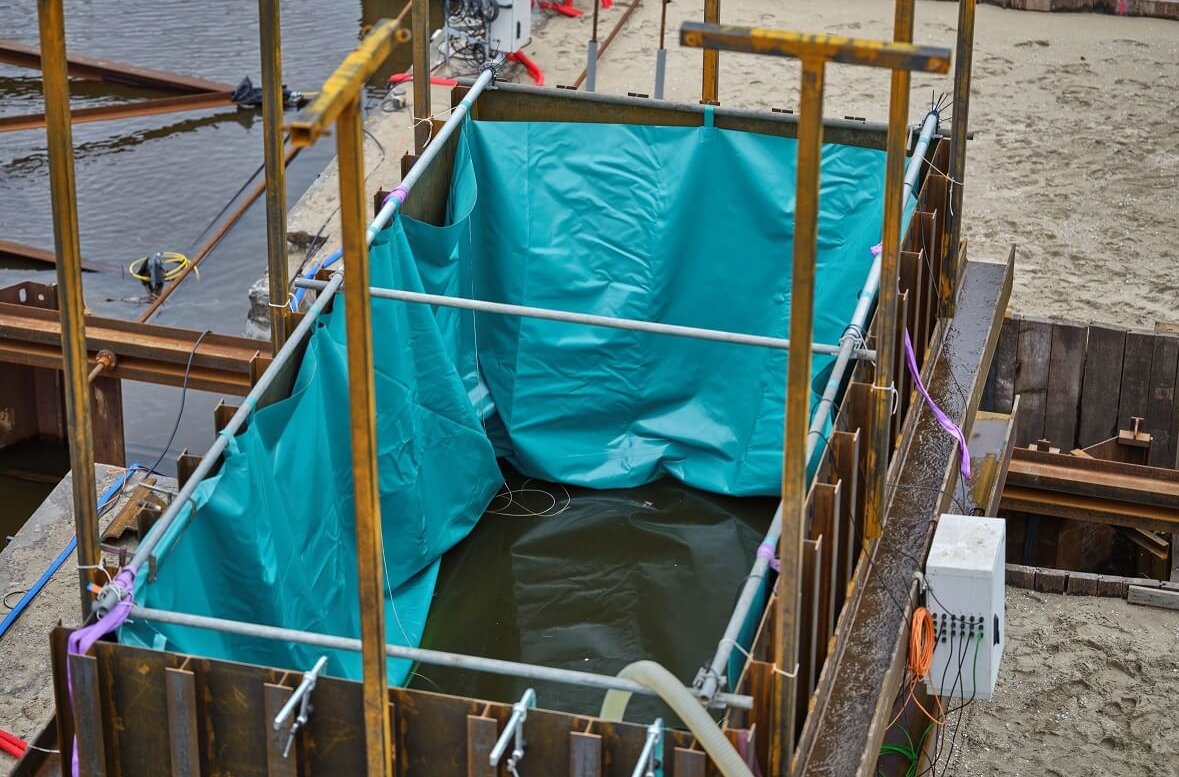 The experiment took 2.5 years to prepare (see box). Hemel: 'In the end we decided to divide the quayside into four quay wall testing sites and one pile testing site. This will enable us to repeat the experiment under different circumstances. Water depth, the location of the load, the composition of the soil behind the quayside or the presence of tree roots in the underlying layers are all variables that play a part. In some of the sites we remove the wooden piles to weaken the quay wall. To prevent the whole thing from collapsing the individual testing sites have been separated by a distance of a couple of metres. These spaces have been shored up by a construction of pipes and sheet pile walls.’ 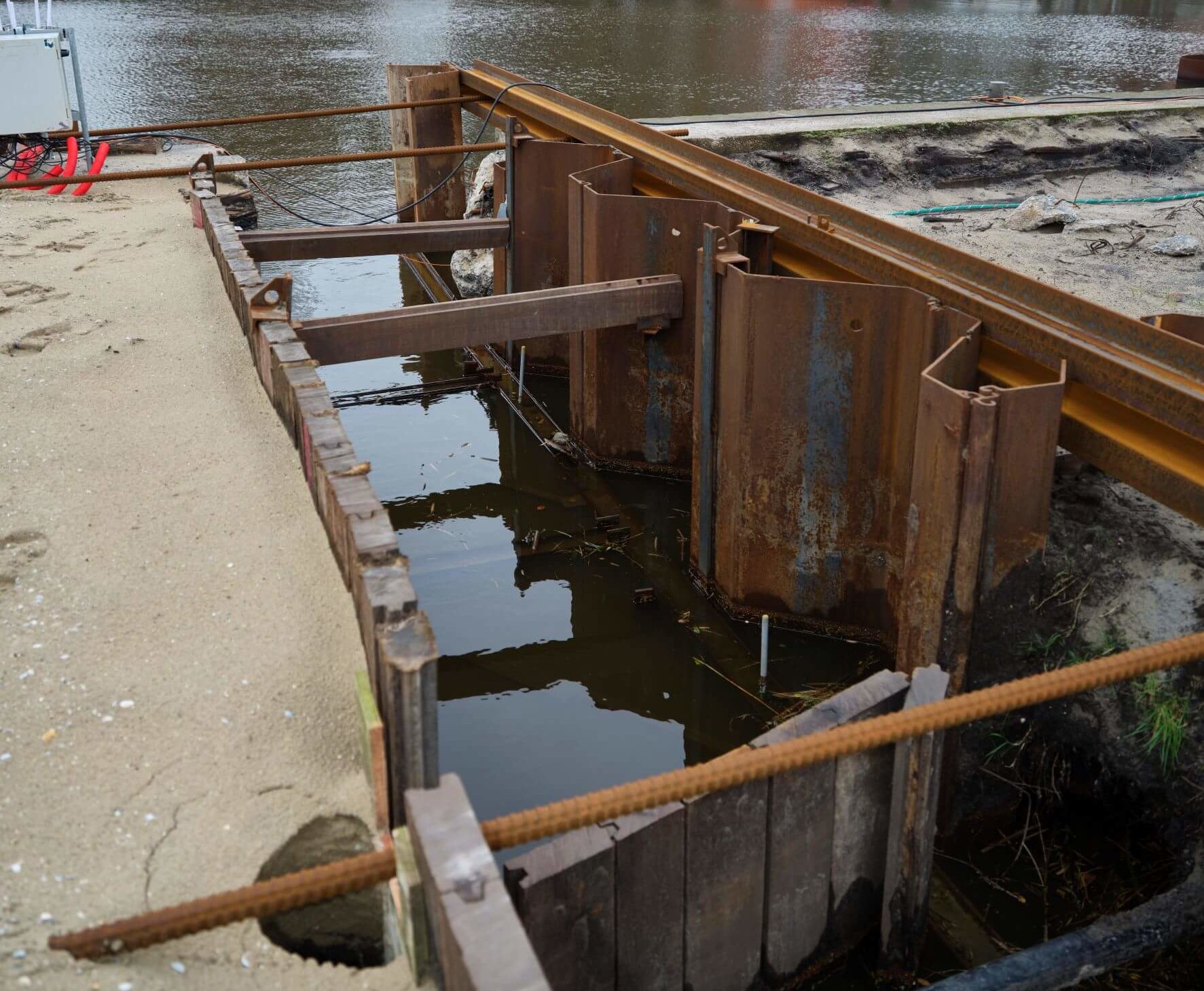 Before load testing can begin we need to know what the quayside looks like below the waterline, Hemel says. ‘The condition of the quayside is determined by the number of piles, their thickness and how deep they are positioned. To find out divers have used sonar equipment and underwater cameras. Monitoring systems have been fitted on and underneath the quay wall so we can see what happens to the elements that make up the construction during the load testing.’

The first container was placed at the first test site in February. Despite a long and meticulous preparation Hemel was a little nervous. ‘This research project offers opportunities but there are risks as well. What we did not want was to damage  infrastructure such as water pipes in case of a collapse. So safety was paramount.’

To increase the pressure a water bag inside the container was filled bit by bit. Hemel: ‘This is done in steps of 30 centimetres, until the quay wall stabilises. We can see the deflection of the quay wall and the subsidence of the surface level on the monitoring screens.’ The whole process is a painstaking one, Hemel says. ‘The bigger the load, the longer it takes for the wall to stabilise.’

We found some ‘interesting deviations’ from the model predictions following the first test but it’s too early to draw any hard and fast conclusions, Hemel said. ‘So far, the execution of the experiment is going just the way we envisaged. Now we will turn our attention to the other test sites. We may weaken the quay wall a bit, or increase the load a bit faster. We can only hope for the moment when it collapses. We’ll see if and when that happens.’

Project of AMS Institute and City of Amsterdam

The quayside experiment is a joint project by the City of Amsterdam and the Amsterdam Institute for Advanced Metropolitan Solutions. AMS Institute is the combined research and educational centre of TU Delft, Wageningen University and MIT, situated in Amsterdam. The research focuses on metropole region-based issues, such as energy transition, autonomous mobility and circularity. Its involvement in the quayside experiment started in 2019 and is set to continue until the end of 2023. The results of the loading tests will be part of Mart-Jan Hemel’s PhD thesis.