The geocentrifuge: a time machine for soil

What happens underground when a landslide occurs? And how do we prevent a high water load or the weight of passing traffic from causing a dike to collapse? Assistant Professor Amin Askarinejad explains how the geocentrifuge at TU Delft can provide detailed simulations of long term subsurface processes in a short time.

If you put a tomato in a geocentrifuge, make it rotate to increase the centrifugal acceleration or gravitational force (g-force), at 6g the skin cracks and peels and not much later you end up with tomato puree. That is the ‘discovery’ Amin Askarinejad made when he tested the first geotechnical centrifuge in his home country of Iran in 2005.

An amusing experiment in itself, however, it is hardly the sort of thing he is involved in at TU Delft. As an assistant professor of experimental soil mechanics, Askarinejad researches failure mechanisms of (underwater) soil structures in  vulnerable areas such as deltas. The resulting insights into how the soil layers behave over time contribute to better ways of protecting these areas from the effects of earthquakes and flooding. His research also helps engineers build more efficiently at sea.

For this work Askarinejad regularly relies on the geocentrifuge at TU Delft, situated in a closed off room in the Civil Engineering and Geosciences faculty building. ‘Here we conduct experiments with small scale models of geotechnical structures, that is, any natural or man-made structure with, in, or on the soil, such as dikes, submarine slopes, foundations, tunnels, etc.... We place a model of, for example, a dike in the geocentrifuge and let it rotate faster and faster so that gravity sensed by the model is increased. Centrifugal acceleration can go up to 300g, that's three hundred times the gravity on earth,’ Askarinejad explains.

Geotechnical centrifuge modelling is all about increasing gravity. While it would be possible to construct a scaled model of a dike with the right geometrical proportions and layering of different types of soil, without the use of the centrifuge it would be very difficult or impossible to simulate factors such as the underground pressures and resistance mobilised in the soil . ‘By increasing gravity every grain of sand, clay or any added substance such as the fluid between the soil grains becomes heavier. That means processes that take a very long time can be accelerated considerably without compromising accuracy.’

Askarinejad uses a calculation example to demonstrate how large the leap in time can be. ‘At increased g-level, by a factor N compared to Earth’s gravity, results in a shorter time by a factor of N squared. For example, if you conduct a test at 100g, you decrease the time span ten thousand times, or by one hundred squared. This means you can chart a process that normally takes 27 years, say the distribution of contaminated fluids in the subsurface, within just  a single day.’

In collaboration with offshore services provider Royal IHC-MTI and a team of PhD and Master’s   students, Askarinejad is currently working on a project involving the optimisation of the installation of offshore wind turbines foundations. ‘What we are trying to find out is how much energy it takes to drive a wind turbine pile foundation into the seabed. If too little force is used the pile won’t enter the seabed properly but if too much force is used the pile may buckle or deform too much. To get it exactly right we are investigating the optimum weight and drop height of a ram mass inside the hammer, as well as the number of strokes per minute.’

A video shows the kind of tests Askarinejad is carrying out. A basket of 40 x 40 x 50 centimetres with a maximum weight of 30 kg is suspended from one end of the 1.3 metre long geocentrifuge arm. The basket contains a layer of sand, a wind turbine pile foundation and the pile hammering system, all at a scale of 1 to 50. On the other end a counterweight balances the arm during rotation. After a few minutes the centrifuge reaches the desired 50g. ‘You can see that it only takes 3 seconds to drive the pile foundation into the soil whereas in the real world it would take much longer.’

While the geocentrifuge is in action nobody is allowed in the centrifuge room, Askarinejad stresses. ‘Because of the high rotation speed, parts may fly off. Due to strict safety regulation, fortunately that has never happened but we can’t afford to take any risks.’ Cameras and sensors mounted on and around the centrifuge allow the researchers to see what happens in the basket from the safety of the control room. ‘High resolution videos and the transferred data are studied carefully and allow us to make detailed analyses.’

The test is repeated a number of times using different types of soil, like sand and clay. The effects of  external factors such as waves and wind at sea on the long term performance of the foundations are also simulated. ‘By repeating the tests under different circumstances the results of the simulations can help improving advanced numerical models using computers.’

It has been a while since Askarinejad experimented with tomatoes and he has used the geocentrifuge many times since then. ‘During my time at ETH Zürich as a PhD candidate and post-doctoral researcher I studied the behaviour of natural slopes subjected to heavy rainfalls. I think it is fascinating to see how complex processes which would normally take years to unfold can be simulated accurately and rapidly at a small scale. I could experiment like this forever.’

The wind turbine project is now in its second phase, which is about determining optimum hammering frequency. The work has given Askarinejad a number of ideas for what he wants to do next. ‘The wind turbine pile foundations that are currently used offshore are not that easily suitable for deep waters. Moreover, installing  these piles is a noisy business and damaging to marine life. We want to develop sustainable alternatives. And for that we will certainly use the capabilities of the geocentrifuge again.’

Share this page
Back to all stories
Other themes:
Availability of clean water
Climate change 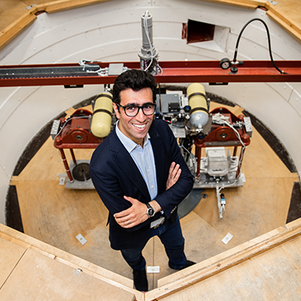 Read all stories of the department Geoscience and Remote Sensing