When a dyke gives way in the Netherlands it’s always announced as bad news. Nevertheless, the dyke breach in the Leendert de Boerspolder last October was a huge success in every sense of the word explains Professor Cristina Jommi of Dykes and Embankment  at the department of Geoscience & Engineering. The controlled breach was predicted correctly down to the day and provided a veritable treasure trove of valuable measurement data for the water authorities and scientists involved, including Jommi. The data collected should, in the future, provide researchers with more clarity concerning the strength characteristics of many of the regional dykes that protect Dutch polders.

Dutch water experts sometimes still have trouble getting used to a dykes and embankments professor from Italy, says Jommi with a wry smile. "The small, regional dykes in Italy are really not that different to the Dutch ones," adds Jommi. She taps her finger on her desk. "Sometimes people can be a bit touchy about it."
Jommi is in a position to know. Before moving to the Netherlands in 2014 for her position as professor at TU Delft, she worked as a professor at the Politecnico di Milano, Milan’s technical university. There she studied Italian dykes making excellent use of her background knowledge of soil mechanics.

The major difference between the Netherlands and Italy is that the dykes in the latter are built to withstand multiple risks. "As is the case here, Italian dykes are calculated for strength and stability, however unlike here, they also take the risks of major earthquakes and sudden floods after heavy rainfall in mountainous areas into account. Although the north of Italy experiences few earthquakes, water barriers there are assessed as to their stability with a view to withstanding earthquakes of a specific magnitude."

The need for increased research into the stability and strength of regional dykes in the Netherlands has received more priority in recent years, says Jommi. "A lot of research has already been undertaken into improving the primary water barriers in the Netherlands, the dykes and dunes that are supposed to protect the country against flooding by the North Sea and the major rivers. However, the Netherlands is also home to some 14,000 km of smaller, regional dykes that protect polders and homes from water. STOWA, the water authorities’ knowledge centre has therefore started a research programme to also properly catalogue the geotechnical aspects of regional dykes." 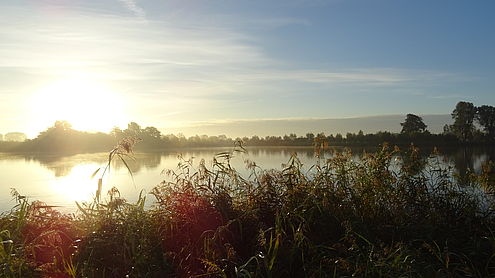 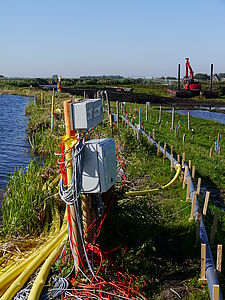 Flooding the Leendert de Boerspolder, a small island in the Kagerplassen [lakes], presented a once-in-a-lifetime opportunity to test existing models and concepts concerning the strength of a regional dyke in practice. This rare event occurred when the Rijnland water authority decided to return approximately six hectares of what was originally agricultural land to water.

The flooding was partly necessary because the water authority had filled in or reclaimed areas of water elsewhere. The rules for water authorities prescribe that if this is the case this has to be mitigated elsewhere in the authority’s area. The polder in the Kagerplassen caught the water authority’s eye because multiple dyke maintenance activities had been planned and could be obviated in this manner.

"The polder was protected by a regional dyke," explains Jommi. "To inundate it, the dyke would have to be breached. The Rijnland water authority realised that the situation offered a good opportunity for scientific purposes. The dyke could serve as a test subject to study the conditions under which a dyke gives way."

A wide range of organisations joined forces for this project. Seven water authorities and STOWA provided funding. Researchers from Deltares, STOWA and TU Delft were involved in setting up the scientific programme. Jommi: "It’s not every day that water authorities invest in a project to make a dyke break. A joint research plan was devised which laid down what the main research questions were for the water authorities and which information was required to be able to answer them. These questions focused on the method used to test the strength of regional dykes, information on groundwater pressure and the composition of regional dykes."

Civil engineers prefer to design homogenous dykes i.e. ones that consist of a single material. This makes it easier to calculate how strong and stable it will be under a variety of conditions. Jommi: "The Leendert de Boerspolder dyke was a so-called clay dyke built on peat bog. This type represents some 3,000 km of Dutch regional dykes: clay on peat. However, as if often the case with such old dykes, the one in the Leendert de Boers polder didn’t consist solely of clay. It may have been the main ‘ingredient’, but other materials were also used when the water barrier was built well over 500 years ago."

The dyke that had protected the Leendert de Boerspolder for hundreds of years proved surprisingly diverse in composition. "We discovered timber, bricks, pottery, mussel shells. It provided insight into the materials people used to build dykes with. At the time of construction waste materials were also used. Recycling was trendy even back then," laughs Jommi.

To make the dyke burst in a controlled manner involved subjecting it to extreme conditions in three different ways. During the first week of the experiment, the bottom of the dyke was soaked with water using a specially built irrigation system. Measuring tools installed at the dyke’s base allowed scientists to monitor the consequences. Then an additional trench was dug at the foot of the dyke. "This results in the height difference between the dyke’s crown and the polder increasing, which influences stability. Finally, the ground water level in the polder was lowered by pumping water away."

"An important point for the study is that you don’t want to load the dyke in a way that makes it give way immediately. The conditions we created were far below that level, but can – in the long term – lead to a dyke failing," explains Jommi. The scientists involved were able to calculate when the dyke would actually give way using models. "Of course, there is a particular margin of error to all calculations, but they predicted the dyke would burst on Wednesday 14 October."

The predictions were perfect and around 06:30 on the 14th of October 2015, the water burst out of the dyke and the polder filled. "The dyke breach occurred exactly within the margins of the predictions so in that sense the experiment was a great success."

Jommi is therefore full of praise for the efforts of all the parties involved. "Everyone did really well. These trials generated a mountain of valuable data the researchers are still working on."

The data collected will, among other things, be utilised for Reliable Dykes’ research programme (see box). In Jommi’s opinion the results will also help improve the analyses van of the strength characteristics of this type of dyke. "Naturally, this is only a single experiment and the test cannot serve as a model for all regional dykes or conditions dykes around the globe are subjected to."

During the trials, the Leendert de Boerspolder dyke was exposed to very wet conditions. "This is an extreme circumstance that can make a dyke fail in the end. Another extreme scenario is to test a dyke’s stability under extremely dry conditions. Dykes built of peat or on peat bogs are susceptible to failure under these conditions."

Jommi wishes to study the effects of ground water on dyke stability in detail. "I will thereby specifically examine soil behaviour. The characteristics and behaviour of soils and, as a result, the strength of a dyke change according to how saturated the soil is with water."

Under everyday conditions, dykes are often only half fully saturated with water. "While many models assume the dykes are entirely saturated and base their calculations on this. I therefore wish to study whether a partially saturated dyke influences a dyke’s strength. Does this affect the dyke’s strength in comparison to strength of the dyke used in models? Little is known about this subject."

Even with regard to this Jommi formulates carefully. "Every study that contributes to knowledge on the strength characteristics of dykes can decrease the error margins in the models we use. This knowledge can help us to build dykes differently in the future, perhaps even more cheaply. However, in no way may this lead to a less safe dyke."

An initial analysis on the basis of the data from the Leendert de Boerspolder trials is expected to become available this summer. Jommi: "The first objective now is to answer the various water authorities’ urgent questions. But that is only the beginning. Further studies will expand on this avenue of research. In the long term the idea is to continue to reduce the number of uncertainties concerning regional dykes." 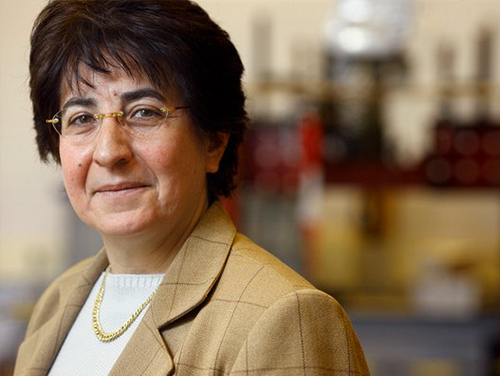