Fringing coral reefs provide a sheltered habitat for many sea animals and are a snorkelers’ paradise. But they also form a natural barrier which protects the shoreline and the area further inland.  Experiments using 3D printed replicas of a coral are helping Marion Tissier gain an insight into how coral reefs influence and dampen wave energy. This knowledge will ultimately help designing coral restoration programmes that efficiently contribute to the protection of these vulnerable coasts.

Growing up near the popular surfing beaches of Biarritz, Marion Tissier watched the powerful waves of the Atlantic Ocean batter the coast from a young age. The sight inspired in her a love of surfing as well as a fascination with waves. ‘During my studies and my PhD in Bordeaux and in my time as a postdoc at Utrecht University I always went back to waves and their changing patterns as they approach the coast. What happens to their shape and height? How much energy is lost before they hit the shore? How do waves interact? And how does all that ultimately influence the shoreline motion and wave impact on the coast?’

The focus of Tissier’s research at TU Delft switched from sandy coasts to coral reef coasts, which she says are among the most complex coastal systems. ‘Contrary to a ‘normal’ sandy coast the seabed of a coral reef coast does not descend gradually. The coral reef usually sits on a comparatively even seabed at about 1,5 metre depth, with a sudden sheer drop at the edge of the reef. That abrupt change of seabed level functions as a wave breaker in major storms. The shape and texture of the reef itself also have an attenuating effect on the impact of the waves. However, some types of wave actually gather strength when they hit the reef under certain circumstances which leads to higher sea levels off the coast.’ 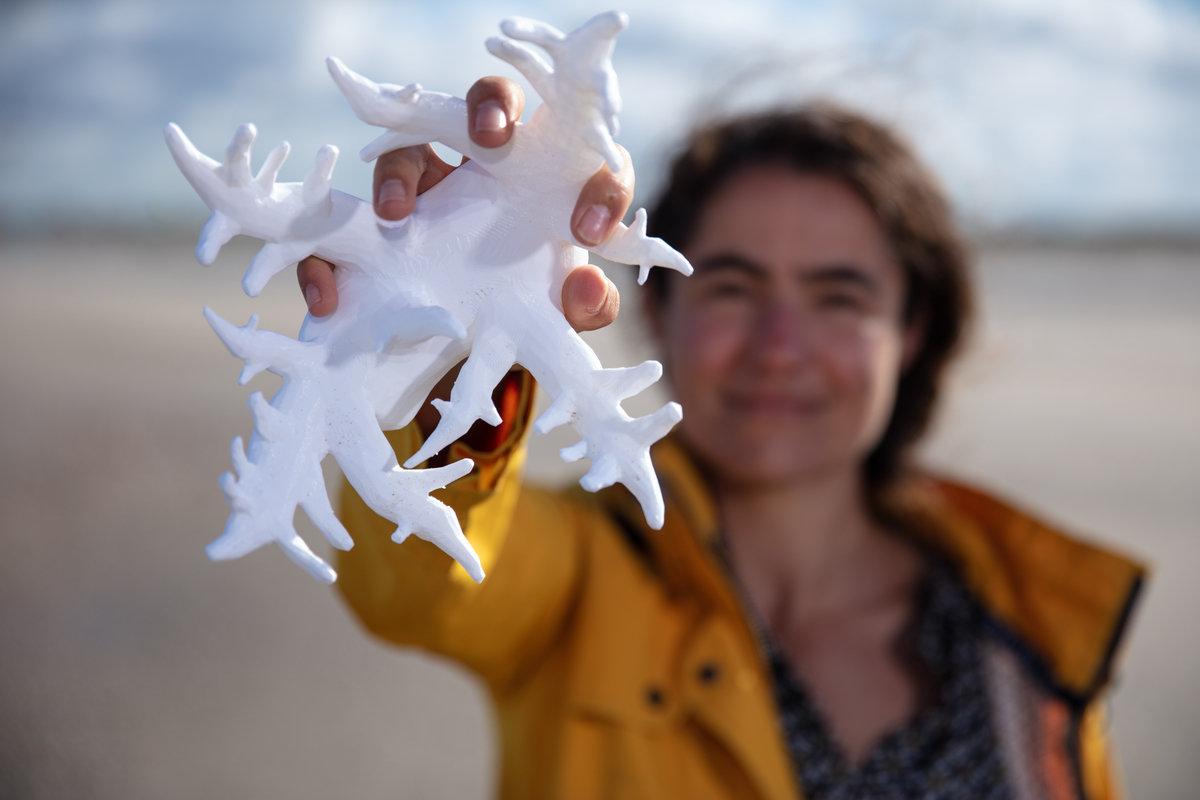 Climate change is a big threat to coral reefs, Tissier says. ‘Global warming and the acidification of ocean water cause bleaching, which makes the corals more fragile and vulnerable to diseases and decrease the speed at which the coral reef is able to grow. Apart from their natural value, coral reefs also have a societal value. Their ability to break the waves protects the shoreline and prevents the coral islands from flooding. Unfortunately, the decline of the reefs affects that very important function. And the fact that coral reefs are often found around low-lying islands means these coasts are extra vulnerable to the dangers of sea level rise.'

Not much is known about how exactly the presence of coral reefs change the waves as they approach the coast, Tissier says. ‘We don’t yet have a complete understanding of wave patterns in a complex reef environment. We don’t really know, for instance, in which situations the reefs limit or strengthen the growth of long waves. It’s this lack of knowledge that makes it difficult to predict extreme high-water conditions. In my research I try to better understand the wave processes to predict the wave conditions on the beach, the movement of the coastline and possible floods. The more we find out the better we can develop adaptive strategies for coastal defence, including coral reef restoration programmes.’ 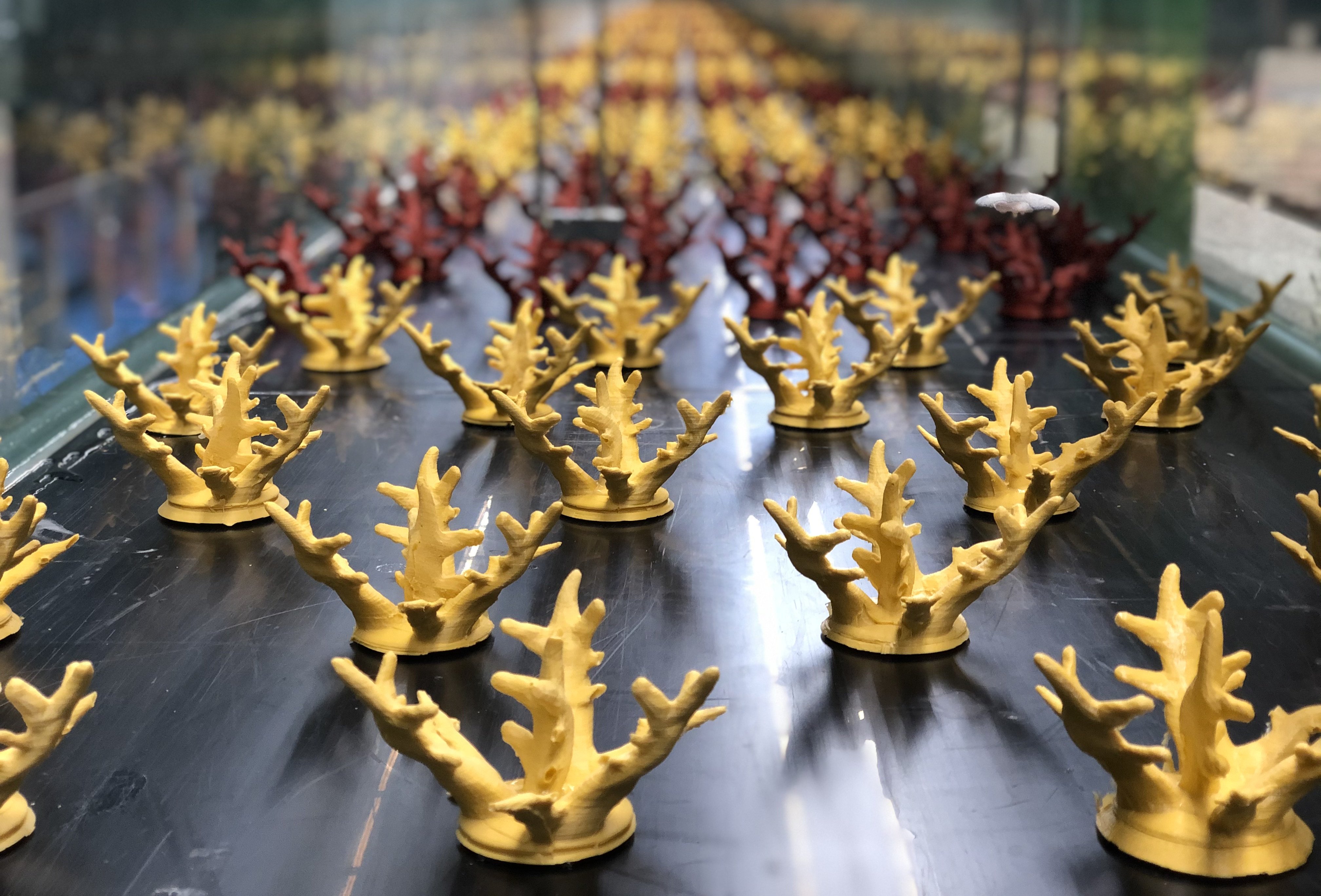 To gain a better understanding of the wave patterns Tissier built her own coral reef at TU Delft’s Waterlab. Collaborating master student Paul van Wiechen moulded 384 3D resin replicas of pieces of coral which they put in a big basin. Tissier: ‘Earlier experiments were using pieces that were much simpler in shape, such as cylinders. But Paul’s 3D replicas are much more realistic and detailed. To mimic real world circumstances, we expose the coral to powerful swell waves as well as long waves. We vary the amount of corals in the basin and also change the space between the pieces. Then we look at what happens to the waves and measure how much energy they lose because of the presence of the coral.’

But despite the more sophisticated set-up at the Waterlab it has proved difficult to replicate the exact circumstances surrounding real coral reefs. ‘We have reasonably accurate scale models of the corals but to scale down the physical elements, such as turbulence for example, is much trickier. We would like to upscale our experiments but to do that we will need a much bigger volume of water. In a next step I aim to use one of the biggest wave flumes available such as the Delta Flume located at Deltares. This flume is 300 metres long and 9.5 metres deep. That will enable us to generate waves of up 4.5 metres in height. We also want to replicate more types of corals to make our coral reef more realistic and we want to do measurements on a more detailed level, for instance measure how the water is moving in between the corals as the waves pass by. That determines how much energy the waves are losing in the process, but also the impact of the waves on the corals’.

Because of her recent work wave woman Tissier has become more of a reef lady. ‘I am learning an awful lot about coral reefs and about the interaction between hydrological and ecological processes. Coral reefs break waves, but they also need the nutrients carried by the waves to survive. My focus on coral reefs as a coastal engineer is different from that of an ecologist. I look at where they can do the most good for the protection of the coast while an ecologist will concentrate on the best circumstances for the corals to flourish. But we can’t look at the one without understanding the other. That is why cooperation between both disciplines is so important.

Share this page
Back to all stories
More stories about:
Climate Change
Urbanisation and Mobility
Other themes:
Availability of clean water 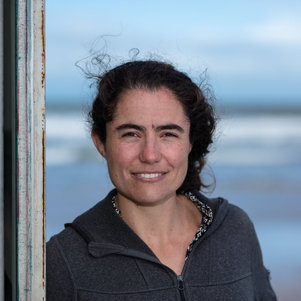