Bo Salet (1992), David Kester (1994) and Siebe Roefs (1993) are Wattlab’s founders. Their aim? To kickstart new solar energy applications and accelerate the energy transition. They all studied in Delft; Roefs studied Applied Physics, Kester studied Electrical Engineering and Salet Aerospace Engineering. Salet: “We met as part of the Nuon Solar Team. We hit it off and, after the project, felt compelled to do something alongside our degrees. That became Wattlab.” The students agreed that the start-up would not affect their graduation.

“During the World Solar Challenge, we wondered why solar panels are so large and cumbersome and not as light as the panels we use in the solar car. If you integrate solar panels in existing structures, you can keep them ultralight. You still often see panels being installed on roofs, but a roof is already a sturdy structure and if you put a panel on top of it, that’s also structural. It’s duplication.”

Wattlab has a different approach. As an example, Salet cites a pilot involving the inland vessel De Oleander. Together with Blommaert Aluminium, Wattlab designed solar panels just a few millimetres thick and integrated them into the ship’s hatches. That kind of structure is capable of meeting 10% of the energy needs of a ship with 850 m² of available surface. For the online supermarket Picnic, Wattlab integrated ultrathin solar panels into shopping trolleys in order to cool them in summer.

A close contact with your client is essential in enabling growth 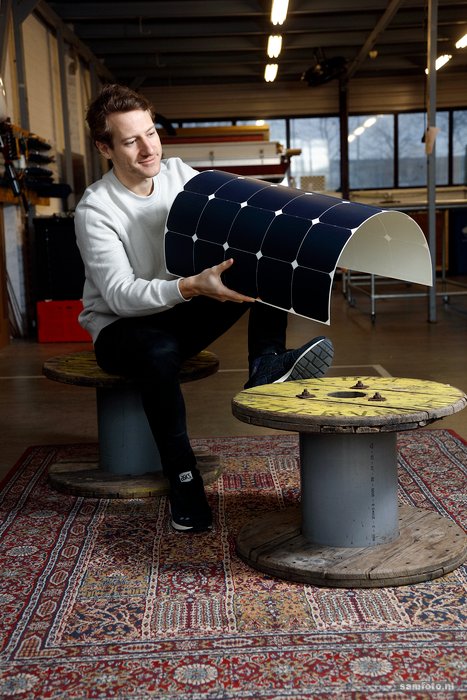 Whereas it used to be Salet, Roefs and Kester who were approaching other companies, it’s now the other way around. “And earlier than expected”, Salet says. In April 2017, they registered at the Chamber of Commerce and Wattlab started life in Kester’s student room, doubling up as an office and production facility. A year on, Wattlab already had the funds to rent a workshop and buy their first machine. What was the biggest obstacle in the early years? Salet sighs. “You imagine you’ll just develop a product and sell it. But there’s more to it. We found ourselves facing all kinds of administrative hassle. I tried to go through a 200-page book on payroll accounting, but it’s just gobbledygook to me. Fortunately, we’ve now outsourced that.”

They also noticed that close contact with your client is essential in enabling growth. Salet outlines his vision for the future: “We want to see Wattlab hubs across the world working together with local partners. Our aim is to push innovations.” So, what about the promise that Wattlab would not be allowed to affect their degrees? Salet: “We managed it. Siebe and I have already graduated, David will follow this year.”