‘I take inspiration from countless insects’

On their own, they often don’t amount to much. But when combined in swarms, drones can solve complex problems. Just like a group of ants searching around their environment looking for food.

The drones from the Micro Air Vehicle (MAV) Lab have distinct animal-like features. Take the fluttering Delfly drone, which has long been the lab’s pride and joy, for example. Many liken it to a dragonfly, because of its two sets of wings and fluttering flight.

Prof. Guido de Croon heads up the MAV Lab, where researchers from Aerospace Engineering (AE) and Electrical Engineering, Mathematics and Computer Science (EEMCS) are working on robots and artificial intelligence. He resists the suggestion that the creatures from his lab are like robot versions of insects. “A dragonfly can do so much more, such as controlling each of its four wings separately. But that doesn’t mean that the dragonfly didn’t inspire the Delfly design. But I take inspiration from countless insects.”

Several years ago, the researchers made an extremely manoeuvrable Delfly with just two wings, DelFly Nimble, modelled on a fruit fly. They managed to reveal a secret behind the puzzling manoeuvrability of fruit flies, publishing about it in Science. Just like these insects, the Nimble can simultaneously rotate along both the longitudinal and transversal axes. It turned out to be a crucial trick in fruit flies’ flight acrobatics. 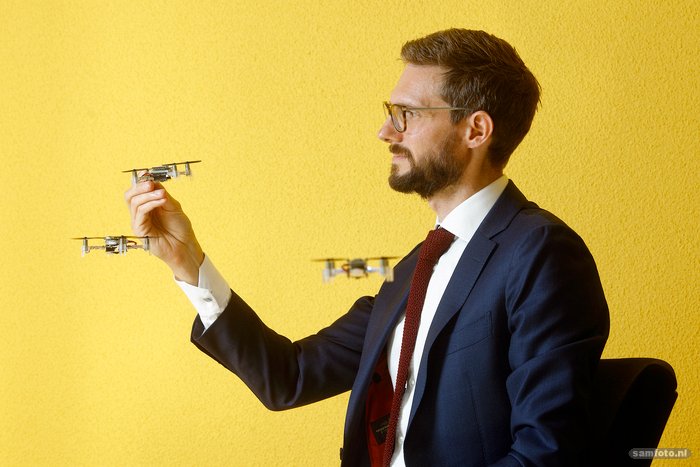 Guido de Croon: “We deliberately opted to keep the drones as small and light as possible, enabling them to manoeuvre in small spaces.”

In his latest project, a swarm of drones that seek out gas leaks, he and his colleagues took inspiration from ants. Together with researchers from the University of Barcelona and Harvard University, the MAV Lab team developed a swarm of small – and therefore very safe – drones that can independently detect and locate sources of gas indoors.

In this, the artificial intelligence was the most important challenge, because the tiny drones had only limited computer power and memory. This problem was solved by means of navigation and search strategies taken from nature.

While not capable of acrobatic flight, ants have certain characteristics that drone researchers can use as inspiration for enabling drones to fly in swarms and explore an environment as a group.

“Our drones work in a broadly similar way”, says De Croon. “They don't have much computing power so individually they are fairly limited. For their navigation, we gave them a simple but efficient insect algorithm, called ‘Sniffy Bug’.”

Individually our drones are fairly limited

The drones spread out across the area as much as possible, avoiding obstacles and each other. If one detects gas, it communicates it to the rest. From then on, the drones work together to locate the source of gas.

Each drone weighs 37.5 g and has a radio transmitter, a camera and 192 kB of working memory. “That's very little in the way of memory”, says

De Croon. “In this  business, drones are usually equipped with a more powerful computer with ten thousand times as many bytes. We deliberately opted to keep the drones as small and light as possible, enabling them to manoeuvre in small spaces and preventing serious injury if you collide with one.”

This basically involves building an intelligent system using separate tiny computing units. “The main challenge is to develop the artificial intelligence that uses all these small separate units in order to solve complex issues.”

They do this with little information: the drones do not know their own position in the room. “Larger drones use laser scanners to chart the area. That takes a lot of computing power, far more than our drones have.”

But they need to have spatial awareness. This is why the researchers looked to ants for inspiration. “Ants keep an eye on how quickly the environment passes them by. Our drones do the same. They have cameras pointed at the floor keeping track of their movements relative to it. They’re a bit like step counters. They share that information with the other drones. This technique is called odometry. When a drone detects gas, it sends that information (gas concentrations) to the others and a wireless chip tells them where they are relative to each other.” Further work will be required before this technology actually can be used in emergencies. This includes three-dimensional movement for localising gas sources at variable height. The navigation also needs to be more reliable.

“This type of artificial intelligence shows great promise”, says De Croon. He envisages several applications. “You could release swarm drones in greenhouses and let them search for diseases. When attacked by pathogens or pests, plants secrete certain chemicals. Drones could detect these, nipping the diseases in the bud.”

He also sees a role for drone swarms in research missions on the moon. TU Delft is developing six-legged robots weighing 1.5 kg, the Lunar Zebros. The plan is for a swarm of these to be sent to the moon in a few years’ time. 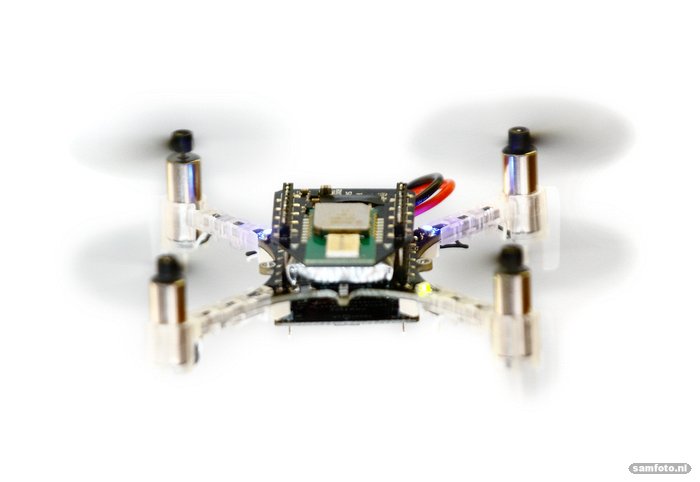 As humankind there is much we can learn from nature. The millions of years of evolution and adaptation to circumstances form an endless source of inspiration for technological solutions. Scientists at TU Delft understand that.

For example, various researchers are using organisms to develop new materials, and PhD candidate Tigran Mkhoyan is studying birds to create a flexible aircraft wing. The swarming drones from the MAV lab also have unmistakeably animal-like characteristics. Led by Professor Paul Breedveld, the Bio-Inspired Technology Group works to develop medical instruments. The steerable laparoscopic instrument shown in the photo was modelled on an octopus. Breedveld stresses that “inspiration is not imitation, but a way of thinking”.