Learning from an octopus

Paul Breedveld (3mE) has always been equally interested in nature, anatomy and technology. How does it work? Why does it work like that? Can it be improved?

Prof. Paul Breedveld’s office looks a bit like a bizarre museum. Where else would you find a sawn-open gear differential between an anatomical model of a head and a mechanical calculator?

An octopus, snake and a parasitoid wasp have all served as models for the inventions produced by the Minimal Invasive Surgery and Bio-inspired Technology group (Faculty of 3mE). The wasp’s ovipositor was used as a model to develop the world’s thinnest self-propelled needle (less than half a millimetre thick). And the octopus’ arm resulted in a tip that moves in all directions for keyhole surgery.

Inspiration is not imitation, says Breedveld. Experimental zoologist Johan van Leeuwen (Wageningen University & Research) showed him the anatomy of octopus arms. “An octopus arm is extraordinary, because there are no bones in it”, explains Breedveld. “It’s made up solely of muscles, all running in different directions. When its sphincter muscles are tensed, the arm gets thinner and longer. If the muscles are tensed lengthwise, it gets shorter and thicker. By tensing and relaxing in this way, the arm can take on all kinds of shapes or stiffen up.”

Applying all of this in a mechanical device crowned with cables surrounded by two springs proved a real breakthrough. However, it took another year to develop a working prototype with 20 cables and a thickness of 5 mm. Generally, engineers aim to minimise the number of components, but the octopus taught Breedveld to think again and maximise the number of components instead. 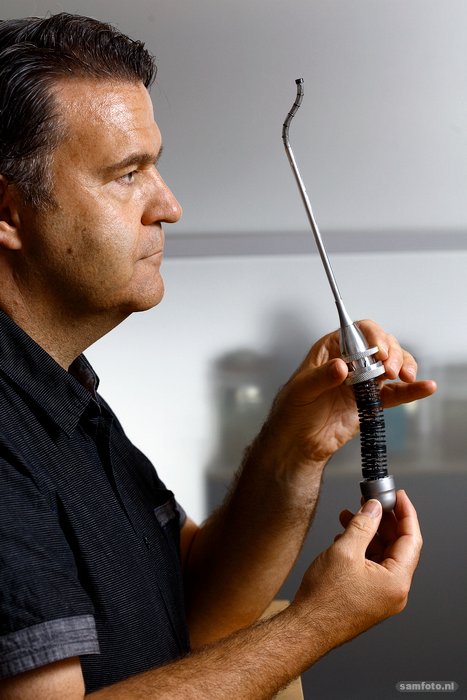 Bio-inspired technology is teamwork, stresses Breedveld, who leads a group of three researchers (Dimitra Dodou, Gerwin Smit and Aimée Sakes), nine PhD candidates and two precision mechanics. When Breedveld developed the first steerable tip, the number of components was problematic. The emergence of 3D printing technology solved that. Rather than making just one movable segment, it became possible to develop a series of fifteen segments that take on each other's position, like a train on a bend.

As humankind there is much we can learn from nature. The millions of years of evolution and adaptation to circumstances form an endless source of inspiration for technological solutions. Scientists at TU Delft understand that.

For example, various researchers are using organisms to develop new materials, and PhD candidate Tigran Mkhoyan is studying birds to create a flexible aircraft wing. The swarming drones from the MAV lab also have unmistakeably animal-like characteristics. Led by Professor Paul Breedveld, the Bio-Inspired Technology Group works to develop medical instruments. The steerable laparoscopic instrument shown in the photo was modelled on an octopus. Breedveld stresses that “inspiration is not imitation, but a way of thinking”.