At the end of 2020, two pipelines will be bored from the campus to a hot-water reservoir, more than 2 kilometres below the A13 motorway. This geothermal energy source, at 75 degrees, will be used to heat buildings on campus and in the surrounding area.

The installation consists of an (1) intake pipe and a (2) discharge pipe that will drop 800 metres vertically from Leeghwaterstraat. At around 500 metres deep, a (3) pump will pump 300 cubic metres of water per hour – enough to fill twelve lorries. From a bend at 800 metres deep, the pipelines run off to different parts of the same hot water source located at a depth of 2.3 kilometres. At the surface the intake (producer) has a temperature of about 75 degrees. The discharge (injector) has a temperature of 50 degrees. As the groundwater flows from the injector to the producer, it heats up again due to the geothermal heat. 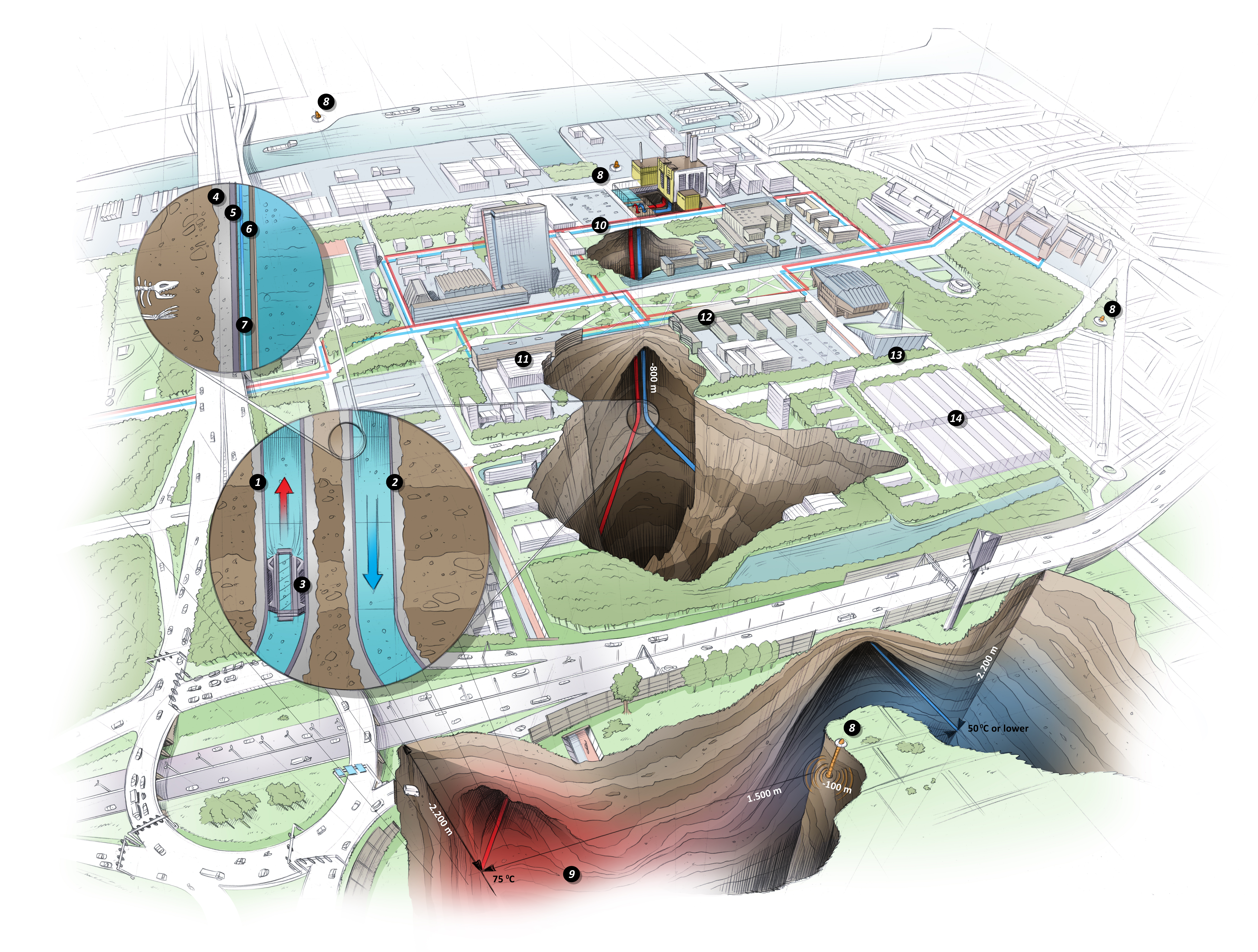 The pipes have a diameter of 50cm at the surface; at the bottom of the well this is 10 to 15cm. In order to prevent leaks due to corrosion from the hot and salty groundwater, the pipes are multi-layered, with a cement outer wall (4), followed by a steel pipe (5) and an epoxy inner lining (6). There is a (7) fibre-optic cable in the water flow for measuring the temperature and pressure inside the pipe. Seismometers (8) are installed at four locations around the well at a depth of around 100 metres, which is deep enough to isolate them from surface activity. The measuring points register the structure of the subsurface via high-resolution seismic measurements. They also use electromagnetic measurements to detect differences in density, and thus the groundwater flow through the (9) reservoir.

An installation to capture natural gas from the groundwater will be built on Leeghwaterstraat, next to the existing cogeneration plant. The hot groundwater will then be filtered and passed through a heat exchanger that will transfer the heat from the groundwater to the campus’ (10) heat grid at a temperature of 75 degrees. In older buildings (11, 12), changes will have to be made to the heating systems since they are set to a higher input temperature. These changes were already planned but have now been brought forward. After passing through the heat exchanger the temperature of the water is about 50 degrees. 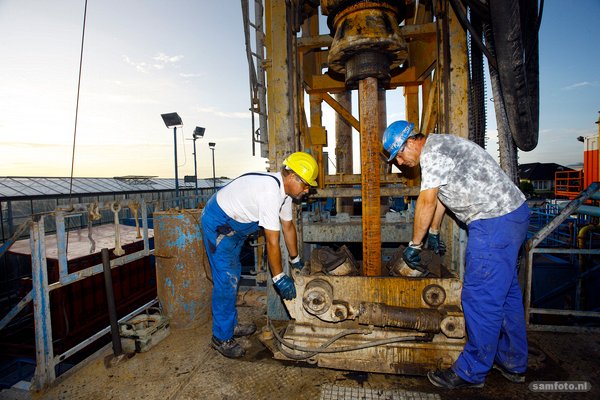 A geothermal installation under construction in Berkel 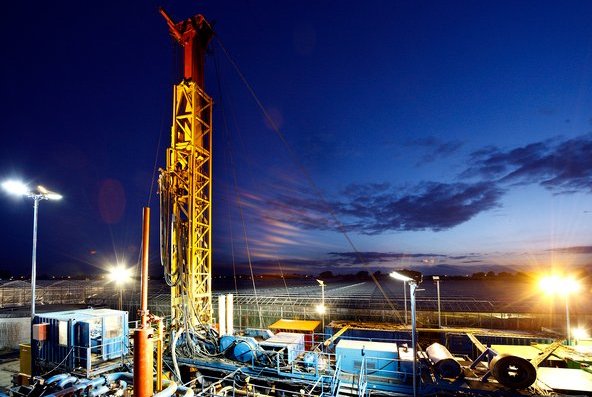 It will cost around € 22 million to construct the doublet (combined intake and discharge of hot groundwater), plus an additional € 8 million for research. The well is expected to provide climate-neutral heating for the campus and its surroundings for about 30 years. With a return temperature of 50 degrees, the well will provide more than 8 megawatts of thermal power. The Netherlands currently has more than 20 doublets (there are two near Delft, in Duijvestein and Ammerlaan), most of which were installed on the initiative of market gardeners. The Dutch Platform Geothermie wants to triple that number to 75 by 2025. In the longer term, Energie Bedrijf Nederland (EBN) is aiming for as many as 700 doublets by 2050.

Dr Phil Vardon (CEG) is coordinating the geothermal project, known as the Delft Geothermal Heat Project (Delfts Aardwarmte Project, DAP) when it was launched in 2008. According to Vardon, this project is particularly exciting because it combines heat production with research. And it brings together various fields: geology, geophysics, data-assimilation, reservoir simulations and geochemistry.

With four measuring wells and two fibre-optic cables in the pipelines, this will be the best-monitored doublet ever. The shape and dimensions of the reservoir, the flow of water at different temperatures, any cracks appearing in the rock – everything will be measured. Vardon is hoping for plenty of data so that researchers in practice, with far fewer measuring systems, can still get enough information about the well. Continuously feeding computer simulations with new measurement data reduces uncertainties in the calculations. This method, data assimilation, is also applied to weather models.

For another programme, researchers will also be collecting a lot of core samples – especially from the layer between 100 metres and 2 kilometres deep, about which little is known. This layer never attracted much interest since it contains no oil or gas. Researchers now want to know whether this interlayer offers possibilities for deep geothermal heat storage (aquifer thermal energy storage or ATES).

What should we do with geothermal energy when the heating is off? In the summer, there is less demand for geothermal energy but the pump continues to run – albeit at a lower rate. What can we do with 75-degree water when it’s 30 degrees outside? Vardon mentions three applications that are currently being explored. One option is to use it to heat up shallow geothermal systems, such as those used at the library (13). Another is to convert it into electricity using an organic rankine cycle (an organic liquid with a low boiling point is used to power a steam turbine). And then there’s the paradox of using geothermal energy for cooling.

TU Delft is a partner in the Delft geothermal project, together with EBN and the company Hydreco Geomec. Once the final negotiations have been completed, the partners will set up a company that will manage the installation and the production of geothermal heat for the campus. In July, TU Delft also signed a collaboration agreement with housing corporations Woonbron, Vestia, Videomes, DUWO, NetVerder and the City of Delft to construct a heat grid that will allow surplus geothermal energy to flow into the neighbourhoods (14) at 50 degrees. The return temperature then drops to 30 degrees, increasing the supplied power from 8 to 15 megawatts.

It is dark underground, but the topics this theme covers are certainly not. Researchers from Delft have discovered that earthquakes can be mapped by analysing infrasound from the atmosphere. Their discovery could save lives. And the proposal for underground gas storage in geological formations has won Dr Hadi Hajibeygi a Vidi research grant from the Dutch Research Council (NWO). Illustrator Stephan Timmers drew an illuminating illustration to a story about the Delft Geothermal Project which will be supplying heat to the campus and its environs. And the students on this photo investigated how you can locate a body underground using their scanner. This and more in the ‘Underground’ theme.