The method of electrolysing water to create hydrogen is more than two centuries old. If hydrogen is to become a storage medium for renewable energy it will require gigantic installations. This calls for an efficiency boost.

Hydrogen is mainly needed for the production of fertilisers and explosives. In the last century, electrolysis plants of more than 100 MW were commonplace for the manufacture of these products. It eventually became cheaper to produce hydrogen from natural gas, and the last 100+ MW electrolysis plant closed in 1992. 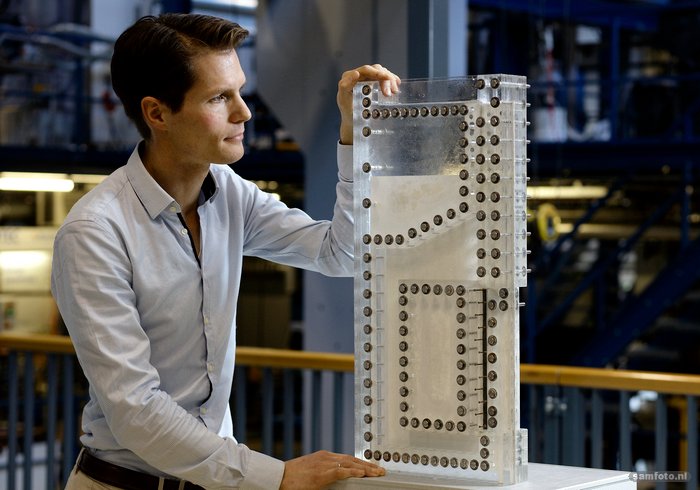 Dr Willem Haverkort with his test setup for electrolysis.

Now that wind and solar energy is booming – with the associated peak supply – there is a demand for storage solutions. Batteries are an obvious choice, but they have drawbacks. Hydrogen is a good alternative: it is chemically stable and easy to transport. Because the production of natural gas causes CO2 emissions, electrolysis is back in the picture, in a big way.

China aims to achieve a capacity of 5500 MW within four years, and the Netherlands aims to have 4000 MW by 2030, according to the Government’s view on hydrogen which was sent to the House of Representatives in April. The view states that scaling up electrolysis should lead to a 50 to 60% cost reduction, which can only be achieved if it is made more efficient. TU Delft is involved in research to this end, whereby the battolyser, an innovative combination of battery and electrolyser, is well-known (see Delft Outlook, December 2018). But more fundamental research is underway.

In electrolysis, electrical voltage is applied to a saline solution. Hydrogen is subsequently released at the cathode and oxygen at the anode. These gas bubbles hinder contact between the electrodes and the solution, so they have to be extracted quickly. Ions also travel through the solution between the two electrodes. The process is more efficient when the electrodes are placed closer together, but then the gas bubbles also come closer together, and combined they form an explosive mix. So it is a puzzle to find the right combination of dimensions, materials, pressure, tension, temperature, etc.

“A typical 2 MW alkaline electrolyser is a tube with a diameter of almost two metres and a length of ten metres,” explains Dr Willem Haverkort, who works at 3mE on the optimisation of electrochemical energy systems. “The tube contains plates that serve as electrodes, while separators prevent the two gases from coming into contact with each other. However, these separators also impede the transport of the ions and so slow down the rate of hydrogen production.”

Electrolysis is an old discipline, but there still remains much to discover

Haverkort: “One of the solutions we are looking at is replacing the separator with a flow to drive the gas bubbles outwards. This could make the transport of the ions more efficient without the risk of the gases mixing.”
Haverkort and student Pim van der Stigchel also designed an innovative electrode with a zigzag shape instead of the normal flat plate. This creates more electrode surface for the same volume. Much research still needs to be done, but they already have a patent.

“Electrolysis is an old discipline, but there still remains much to discover,” says Haverkort. “The industry likely still has knowledge that has never reached the research community. In the 1960s, for example, the separator was often attached directly to the electrodes. When we try that today, it works for a while, but putting a very small distance between them still proves to work better. Old patent applications suggest that people knew this, but the knowledge behind this is unknown, at least to us at the university.”

What they certainly did not have at the time were the extensive computer models that Haverkort now has at his disposal and which make the search for promising solutions much easier. However, it is presently impossible to say with any certainty whether the government’s wish of a 50% efficiency increase will be feasible.