How the natural gas network is helping the energy transition

The extensive Dutch gas network could be an important asset to make green hydrogen available to a large public.

According to a recent Kiwa study commissioned by Netbeheer Nederland, this dense natural gas network of 136,632 kilometres and more than seven million connections is well suited to the transport of hydrogen gas. Could this gas be a suitable form of fossil-free heat for millions of older homes? 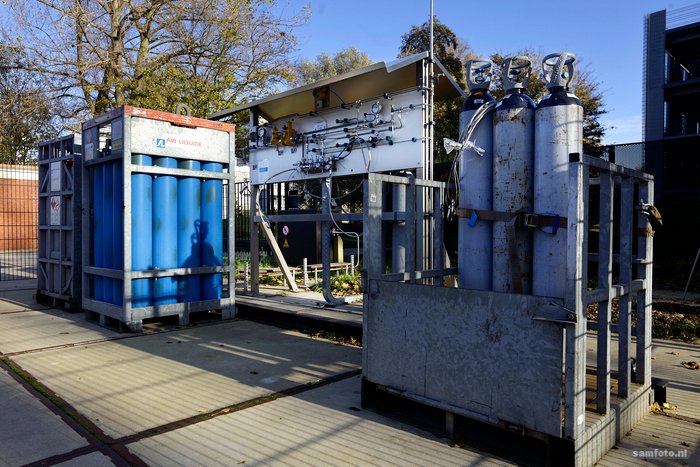 Electric heat pumps or heating networks based on geothermal or residual heat are often the preferred choice for CO2-free heating, but not all homes are within reach of heating networks, and a heat pump is unsuitable in city centres, says Peter Luscuere, professor of building physics and services at the Faculty of Architecture and the Built Environment. “This is because heat pumps often work with a heat exchanger with a fan that makes noise all day,” he explains.

Moreover, the electricity grid does not have the capacity to cope with a massive transition from central-heating boilers to electric heat pumps, even if the homes were to be adequately insulated. “The idea of ‘everything electric’ is completely insane,” says Luscuere. “If you know how much effort it takes to increase the capacity of the grid by only 10%, you will understand why such a transition is impossible.”

TU Delft alumnus Elbert Huijzer, strategic consultant for grid manager Alliander, estimates that this transition would require a much huger expansion. “If the electricity grid also has to absorb the peaks of the gas network, it will have to be expanded by a factor of six or seven.”

This is why more and more people are calling for the natural gas network – the Netherlands’ national treasure – to be reused as part of the transition to fossil-free energy instead of being decommissioned. Green hydrogen could reach millions of existing homes through that network.

A forerunner of such a hydrogen network, the Hydrogen Street, can be seen on the TU Delft campus. Grid managers Alliander, Enexis Group and Stedin commissioned the Green Village to create a hydrogen technology living lab that others can also use to test their hydrogen products. Lidewij van Trigt, Energy Project Manager of the Green Village, is seeking users for the facility inside and outside TU Delft.

The Dordrecht-based company gAvilar has been involved from an early stage. Their ‘household gas pressure regulator’ has been installed in almost every house and reduces the incoming gas pressure of 100 mbar to 30 mbar. The regulator works just as easily with hydrogen as with natural gas, explains TU Delft alumnus Lianne Mostert, project manager at gAvilar. The manufacturer is developing a small extension for the valve especially for hydrogen applications, which closes the valve when it detects a gas leak. gAvilar is one of the five partners in the H2@Home research programme which is supported by a grant from the Ministry of Economic Affairs’ Energy Top Sector.

TU Delft alumnus Huijzer calls the test bed at the Green Village a ‘Madurodam-sized gas network’, referring to the miniature city. All materials and gas pressures commonly used in the national gas network have been brought together in a small area as a testing ground for hydrogen technology. Huijzer does not expect hydrogen to be available in the first households until 2030 – price and availability are a major factor. Currently, energy in the form of hydrogen is more than twice as expensive as natural gas. In Luscuere’s opinion, fossil fuels need to be taxed more heavily and thus more fairly. “Only then will there be a transition and will you be able to start thinking about rolling out hydrogen in the Netherlands.”