Large-scale hydraulic engineering projects such as the Afsluitdijk and the Delta Works are often built for the wrong reasons, Professor of Ecological Engineering Peter Herman explained during his inaugural address.

“My inaugural address was a plea for caution’, recalls the Flemish ecologist. “You have to base changes to the coast on how the coastal system actually works, not on grand plans that try to solve all problems at once.”

That’s why Herman does not regard artificial islands in the North Sea as the solution to environmental problems ranging from dredging waste and windmills to expanding the airport.

An example of his ‘cautious approach’ is Herman’s vision of Zeeland, where powerful dams have closed former estuaries to provide agriculture with fresh water. He continues:   “Something had to happen in Zeeland after the flood. Two alternatives were developed: raising the dikes or damming the estuaries. These alternatives had approximately the same cost and both were feasible. Raising the dikes would have been considerably easier than what they ultimately did. The reason they chose to shorten the coastline and dam the estuaries was to provide fresh water for agriculture. In the end, all kinds of water quality problems meant that that was only achieved in Haringvliet.” 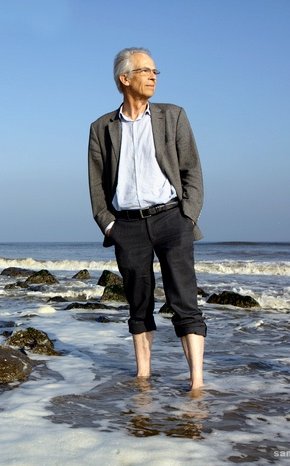 The Delta Works may seem powerful, but their replacement is already being considered. In a few decades they will be too outdated, too weak or too low to protect the people of Zeeland from the rising sea level. And although a ‘Sand Motor’ does not work along the slippery coast of Zeeland, Herman also sees opportunities for natural water defences there.

“You could consider making these coasts wider by reducing the sludge. For example, you could construct a zone of summer polders in the outermost polder ring and combine that area with agriculture or aquaculture. I think that alternatives along those lines can be invented – alternatives that strengthen the scenic and natural value of those coasts, and that are also economically realistic because they still allow a kind of food production. In the long term, this would create a broader coast that is far less vulnerable than a single dike that becomes increasingly vulnerable as sea levels rise. There are limits to how high dikes can be raised. The value of the land that lies behind it is not such that you can endlessly invest in such a dike.

If you can use natural forces and thus reduce the investment costs, that could be a viable alternative. There is an opportunity to cultivate aquaculture in those zones, and aquaculture produces products that are worth much more than onions. Think of saline agriculture or oyster beds. Much of the agricultural land in the Netherlands is being used for marginal profits, so it is not so difficult to invent something that is competitive in terms of revenue.”

The sea is an endless void that you can gaze across this summer. Or is it? There are more activities at and under the surface than can be seen at first glance. For example, Delft researchers are mapping the increasingly urbanising sea and seabed of the North Sea; investigating the possibilities for CO2 storage; predicting wave action; 'playing’ with microorganisms; optimising wind energy; devising means of natural coastal reinforcement; and looking for vortices. A brief look at the latest research news from TU Delft.