More than 300,000 people in the Netherlands alone suffer from cardiac arrhythmias. This leads to various symptoms, ranging in their severity from a minor nuisance to life threatening. Treatments are available, but they often have their limitations. To select the best treatment, we first need to gain a better understanding of what causes cardiac arrhythmias. Natasja de Groot is conducting research on this subject. She is a cardiologist-electrophysiologist at Erasmus MC and also professor at TU Delft. Her direct heart measurements provide unique data and knowledge.

Cardiac arrhythmias is a problem in which disturbances in the electrical signals in the heart cause the heart to slow down, speed up or beat irregularly. The problem can stem from different places in the heart, but in all cases it causes the heart to work inefficiently, thereby reducing the flow of oxygen to the body. Patients often experience symptoms such as tiredness, dizziness, shortness of breath, or chest pains. Extreme cases of arrhythmia can lead to cardiac arrest.

“There are drugs that intervene in the ion regulation of the heart cells,” explains Natasja de Groot, “but these often have little effect and cause unpleasant side effects. For young people in particular, we are reluctant to prescribe such drugs for a longer period. There are also treatments involving cardiac catheterisation, but these often produce only moderate results in the longer term, particularly in patients with congenital heart defects.”

A clear understanding of the mechanisms underlying cardiac arrhythmias will enable us to develop alternative and better treatments. With this in mind, Natasha embarked on a special study: “Since 2010, we have been asking patients who arrive in Erasmus MC for open heart surgery  to participate in our study. During the operation we carry out measurements directly on the heart, which enables us to gather unique data on electrical signals in the heart.”

The cardiac surgeons are also excited to follow the procedure, watching the developments closely. “We started with an electrode on the surgeon's finger. The surgeon had to move his finger directly across the heart to perform the measurements. This proved difficult to monitor closely, as it was hard to track exactly on the heart where the surgeon had already measured. In the meantime, we have refined the process considerably, thanks in particular to TU Delft, which has been a research partner since 2014.”

This collaboration came about more or less by accident. “I was having a problem picking up the signals, wanted to measure more accurately and analyse the data better. So I approached a colleague here in the hospital, who knew someone at TU Delft. That very same day, I met Alle-Jan van der Veen and Wouter Serdijn from the Microelectronics department in Delft, and we have been working together ever since.”

The researchers work together within the Medical Delta Cardiac Arrhythmia Lab scientific program. Medical Delta is a partnership between the five academic institutions and four universities of applied sciences in South Holland, including TU Delft. Scientists from health care and technology work together in interdisciplinary research teams on technological solutions for sustainable care. Because doctors and engineers work closely together, very useful innovations and new ways of research arise.

Wouter Serdijn's team makes the sensors that accurately map the electrical signals around the heart, and his TU Delft colleague Alle-Jan van der Veen developed a method to analyse all the data obtained. The successful partnership also resulted in Natasja's appointment as part-time professor to the same department in 2019 and as a Medical Delta professor. This enables them to make changes and exchange knowledge more quickly.

The fingertip electrode has since been replaced by a kind of ruler that is briefly held against the heart. Furthermore,  the data is now sent directly to a digital platform. “The data platform was built by an astronomer and we use it to guide the surgeon through the mapping and to analyse the data more easily. Now we can immediately generate a geographic map of the heart showing the electrical wave as it spreads to all areas of the heart. This also allows us to detect where the signal falters. You can see how the front of the electrical wave curves upwards at a certain point, for example due to a group of cells that doesn't conduct well, or an area with scar tissue that the signal is unable to pass.”

Special technology has enabled the first detailed mapping of conduction properties in the hearts of children. Professor Natasja de Groot is working on refining this mapping method in order to collect data with even more precision. 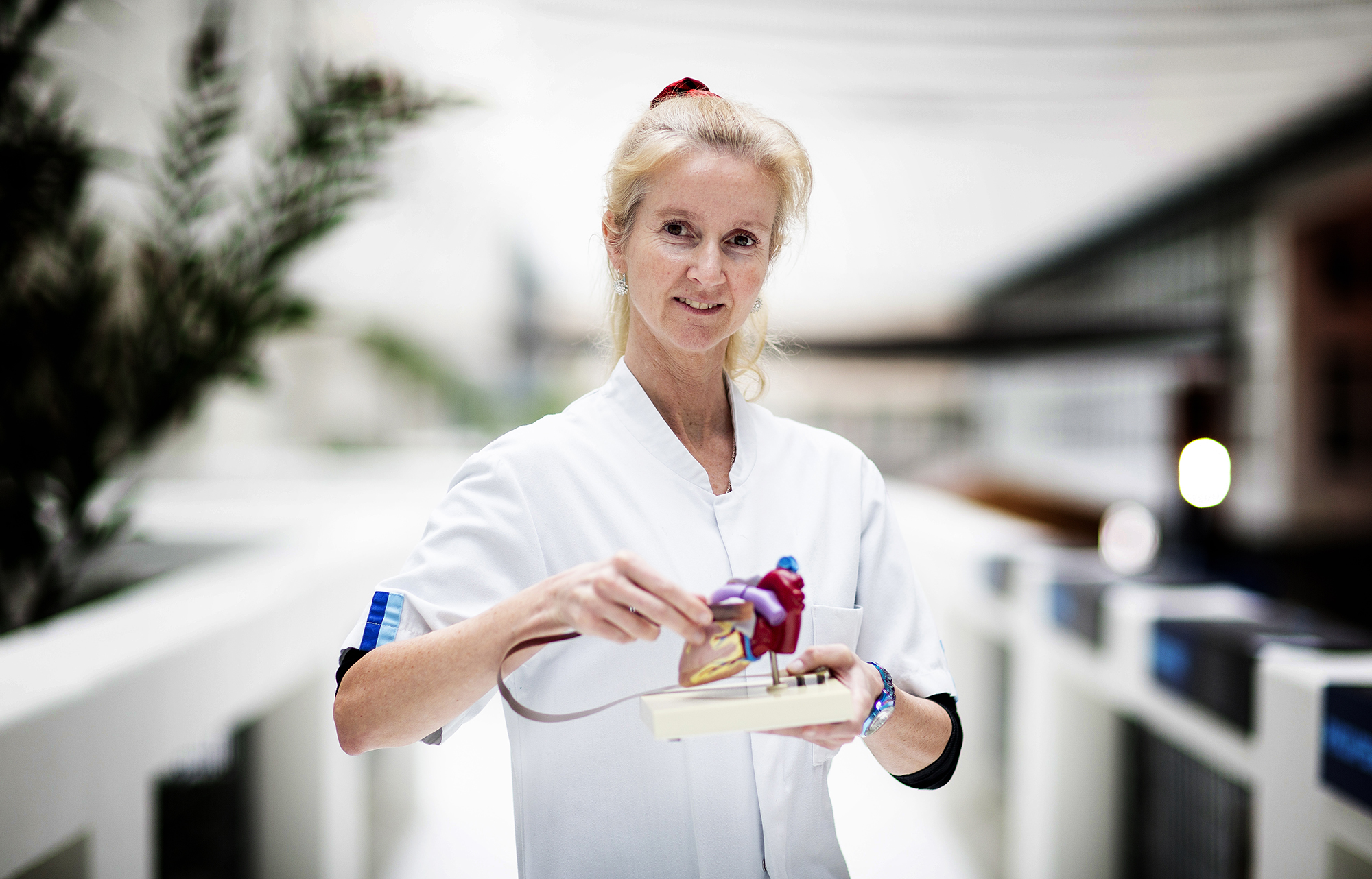 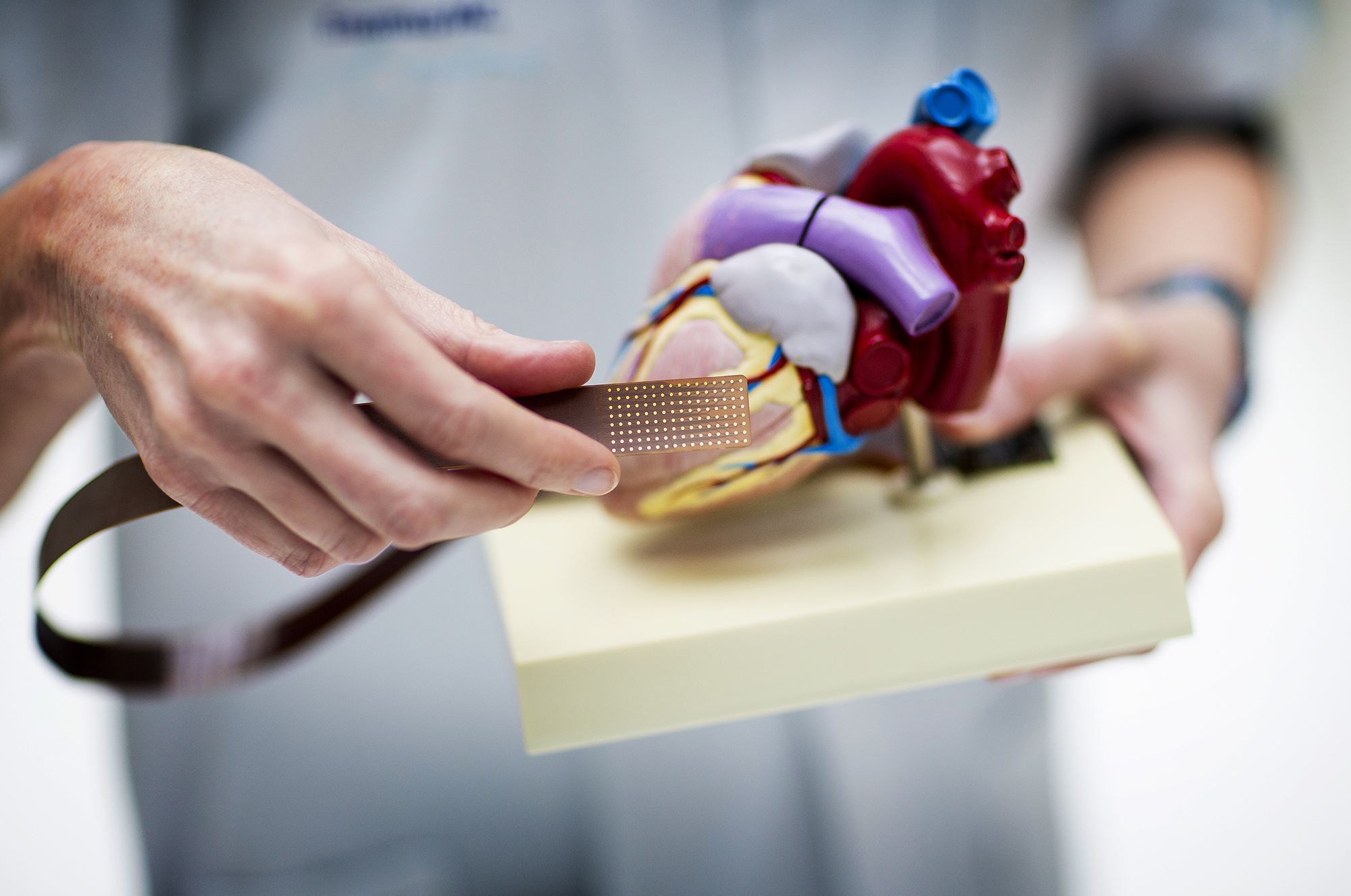 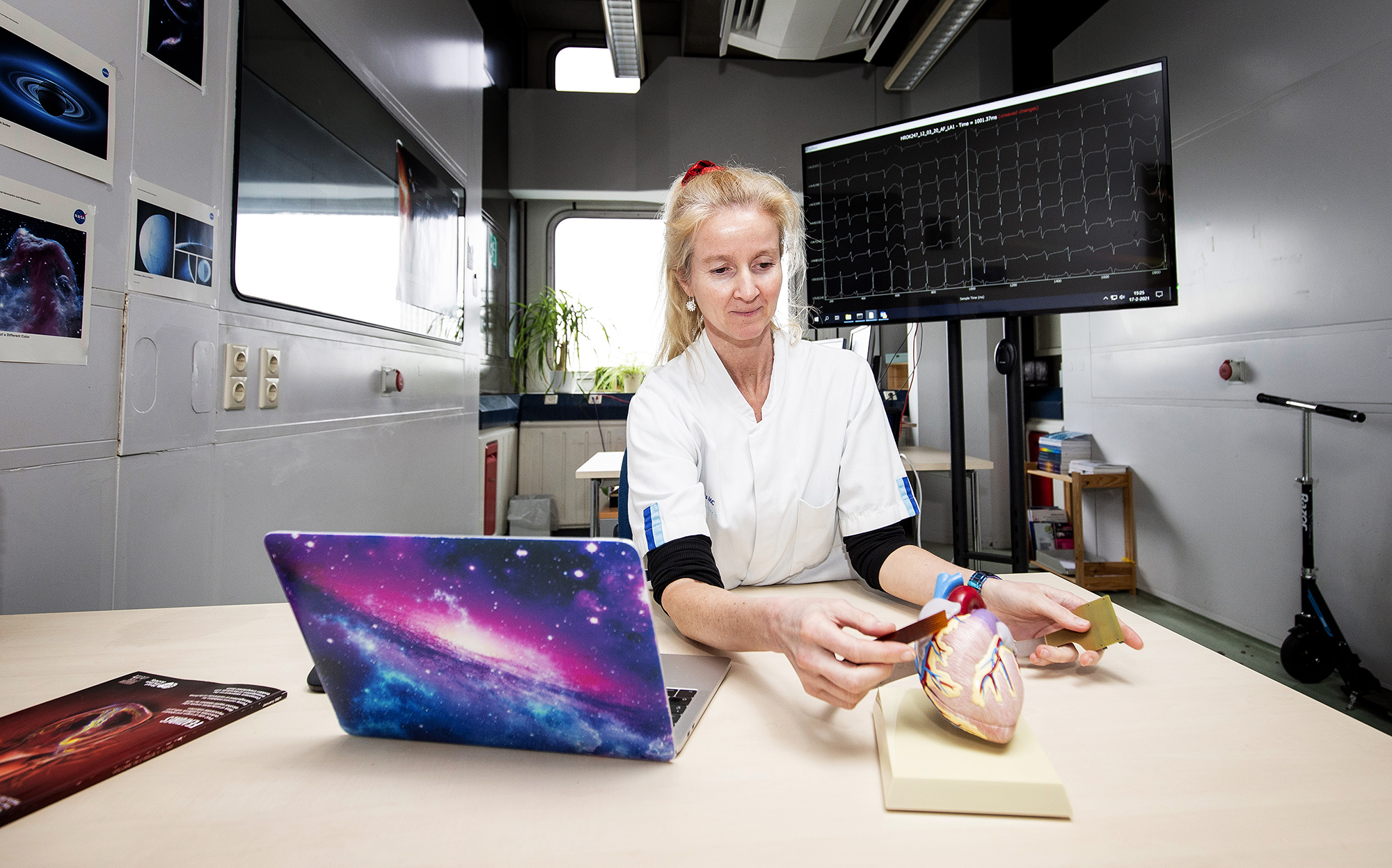 We are the first people in the world to map cardiac arrhythmias in this way, in both adults and children.

Thanks in part to these improved mapping and analysis methods, we are now able to conduct measurements in children with congenital heart defects. This kind of examination has never been carried out before. Yet, particularly at an early age it is easy to determine whether an impairment is already present at birth or develops over time. “Up to now we have successfully performed measurements on more than forty children. For this, we still use the same electrode as for adults, which limits our ability to map certain areas of the heart. Our next step is to make our equipment the right size for these young patients, so  we can improve our measurements even further.”

The data we have gathered should produce demonstrable results within two years. “I expect that we will then have a better understanding of how the electrical signal is disrupted  by a variety of heart defects. We will also then know the exact areas of the heart where the impairment of the electrical signal occurs. We have also created a diagnostic instrument that enables us to map cardiac impairments and determine their severity. I am convinced that we are laying down the foundation for the development of new therapies and that we can truly improve the lives of cardiac patients, adults and children alike.” 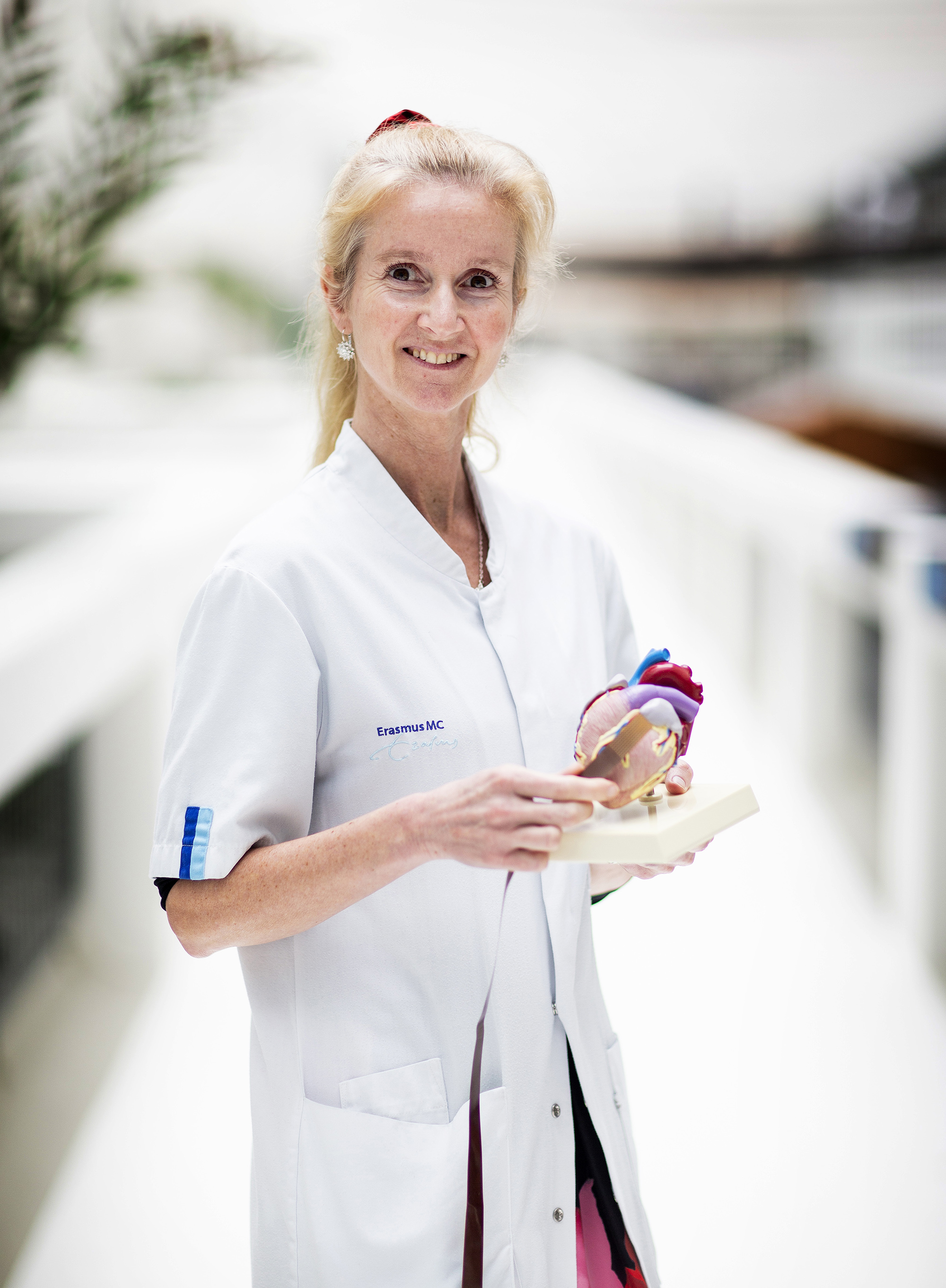 I expect that the medical centres and universities of technology will grow increasingly close. Doctors are already showing more interest in technology, and they need this knowledge to be able to use new equipment. The great thing about TU Delft is that it is nearby and there's a great atmosphere. You step inside and it feels familiar, making it easy to work together.