'No two courses are the same, making the degree programme very challenging' 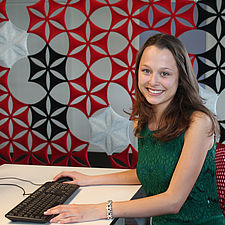 A few years ago, I would never have thought that I would go to study Computer Science Engineering. To me it always seemed a typical study for boys. When I was in my final year at school, I started to find the subject increasingly more interesting. I participated in two different taster days and after the second time I was sold!In the first year, you start at the very beginning, especially when it comes to programming. This was a huge relief for me, because I had never done any programming. All aspects of computer science are looked at, such as programming in various languages, but also logical reasoning and building websites. But you also get mathematical courses, such as Calculus and Linear Algebra. The best thing about it is the diversity: no two courses are the same. This creates a very challenging programme.Later on, I would love to work in Artificial Intelligence. This is integrated into the Logic-based AI course and Multi-agent System project during the first year. This involves programming a robot in such a way that it can almost do everything itself. Many of these techniques can be applied in healthcare, such as in a surgical procedure. I therefore see an opportunity of combining two things that I really like! I have absolutely no regrets that I chose this degree programme.