You CAN touch this 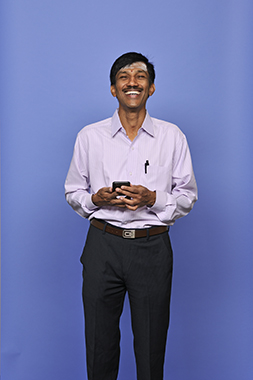 Dr Ranga Rao Venkatesha Prasad, Computer Scientist at TU Delft, is proud to be one of the main players in the development of the Tactile Internet. Apart from standardization and applications in this world (think: gaming, online shopping, health care, transport and education), he is particularly excited about its potential in aerospace engineering.

In about five years from now we could be playing the videogame Gran Turismo with actual cars on an actual circuit, from anywhere. When 5G is introduced, the internet as we know it will rapidly be moving towards an ‘Internet of Touch’, which will completely redefine remote control.

I like to call it the Internet of Skills. Or the Internet of Touch. Because that is basically what it is: transporting skills or touch. You might have a skilled Delft Blue painter in Delft painting a porcelain vase in India. A robotic arm in India is an extension of his own. He is wearing a smart-glove with sensors, transporting his skill to that robotic arm halfway across the world.

It is the next generation internet. At the start of this millennium, the internet was moving from one-way communication (such as file download) to real-time applications with audio and video. The next step was to not only have two people interacting but to have two things that can interact, as if they are collocated. TU Delft contributed heavily to that ‘IoT version 1.0’ from around 2005. That’s when I joined TU Delft and started working on Personal Networks: connecting the devices in, let’s say, my home, car and office. IoT evolved from there. It’s connecting everything to everyone and adding nice services. But there is something missing in IoT because we are not able to transfer skills or touch.

I expect the first applications in gaming and shopping within the next five years. There are already experimental smartphones with screens that can emulate surfaces. The coming 5G network will be a huge enabler for the Tactile Internet. You are sending a huge amount of data, so you need a fast wireless connection. 5G is expected to be introduced in 2020. By that time, we should be able to get a 25 millisecond round trip in data transmission with the Tactile Internet. That’s when we will be breaking the barriers for gamers.

It will probably be more like a doctor in Amsterdam performing an operation on someone in Rotterdam. The Tactile Internet requires ultra-low latency and ultra-high reliability, because you use real-life, real-time intelligence to perform the task instead of Artificial Intelligence – especially important if doctors were to use it to perform distant operations. You need a one millisecond round trip (action and feedback all within one millisecond) for that sort of highly skilled, high-risk task. One millisecond is quite a tough target. And even if we reach that target we cannot have more than 150 kilometres between objects, because we are limited by the speed of light. We don’t have the intention to go beyond the laws of physics. <laughs>

We will be breaking the barriers for gamers

I personally look forward to giving my wife and daughter back in India a hug every day when I am in the Netherlands. Service providers like Vodafone are already interested in the technology. The Tactile Internet will also be a hit in online shopping because you can actually feel the fabric of the garment. And there will be a huge market for gaming. With the Tactile Internet, highly skilled gamers could drive an actual racing car on a Nascar circuit in the States while sitting in their living room. It will take the gaming industry, quite literally, to a whole new level.

We are limited by the speed of light

Gerhard Fettweis (Technische Universität Dresden) and Mischa Dohler (King’s College London) initiated research into the Tactile Internet, and are still leading it. What usually happens in the beginning is that researchers all over the world get excited and start moving in multiple directions. Initially, that is a good thing as it drives innovation, but eventually it causes confusion. That is why we need standards to be able to move forward with this research. As the vice-chairman of the group, my role is to identify the focus areas of immediate concern in such a way that we can expedite the commercial viability of tactile internet-related technologies. Apart from being vice-chairman of the standards task group, I am also working on low latency MAC protocols for the Tactile Internet.

There are already researchers in Munich who want to get cracking on the coding. But how do we code ‘touch’? There is no definitive answer! With IoT you have a sensor in a device that is sending data to a server every once in a while. With the Tactile Internet you have continuous data and multiple sensors to measure force, texture, stiffness, vibration, orientation, temperature, to name a few. Think about that Delft Blue painter for a second: the way he holds his pencil, the weight of it, the speed or thickness of his strokes, the pressure he puts on the vase, etc. We need to start thinking about medium access control when multiple nodes and sensors are trying to send data.

How do we code touch?

At the moment I am developing a lot of equipment for satellites. If something breaks down I cannot go into space to fix or retrieve it. It is such a waste. With the Tactile Internet, I could fix it from the ground. A 200 millisecond round-trip time would be sufficient for that. And think about work on the international space station. Those skywalks by astronauts come at a high risk. We could start building things in space too, one piece at a time. It will be a galaxy edition of Lego. <smiles> I must sound like I am from another planet, but that is how it works in our world. Someone comes up with a strange idea or target, and things slowly get there.

It will be a galaxy edition of Lego