As mentioned before in "Designing difficulties of the Power Distribution System” I am the designer of the power distribution board (PDB) of Project MARCH the third team.

During the process of designing this board I learned a lot as you would expect and encountered a lot of unexpected things as I mentioned in "Meet the Electrical Engineers of Project MARCH".

Though now that is coming to an end. The first iteration of the PDB is done. As previously mentioned its main function is to monitor the used power and cut it off if necessary from the electrical components of the exoskeleton. These components are the master computer, the general EtherCAT slaves and the servo drivers, the iMOTIONCUBEs. They all require a 12V power supply, but the servo drivers also require a higher voltage supply to drive the connected motors. For safety reasons the voltage for this power supply is chosen around 50V, the nominal voltage of the battery we use. As we only have the battery as a power supply, we would need to convert this to 12V. We choose to do this with a DCDC converter we buy which has a on/off pin with which we can turn it on and off. It also has an integrated over-current protection and over-temperature protection. This means that we do not need to design one from scratch and saves us a lot of time.

This leaves the extra 50V power supply to the servo drivers. These servo drivers would need to get separate connections. Instead of a single 12V connector to which all devices can be connected, one connector is needed to connect each servo driver. This is because of the relative high current drawn by the servo drivers, a voltage drop can occur over the cable which could influence the other servo drivers. Unfortunately this current flow was not known, so we took the over-estimation of 30A per motor. Still these connections need to be cut off when needed. This is where the Ideal Diode Controller (IDC) comes in. It allows the current to flow in a single direction just like a diode, while also being able to cut it off entirely and dissipate a lot less energy. This diode function was expected to be needed as the regenerative power of the motor could potentially be damaging to the battery. This combined with a dedicated current sensor and a few logical gates allow for an over-current protection and measuring the exact current, allowing easier optimization of the PDB in a later iteration. 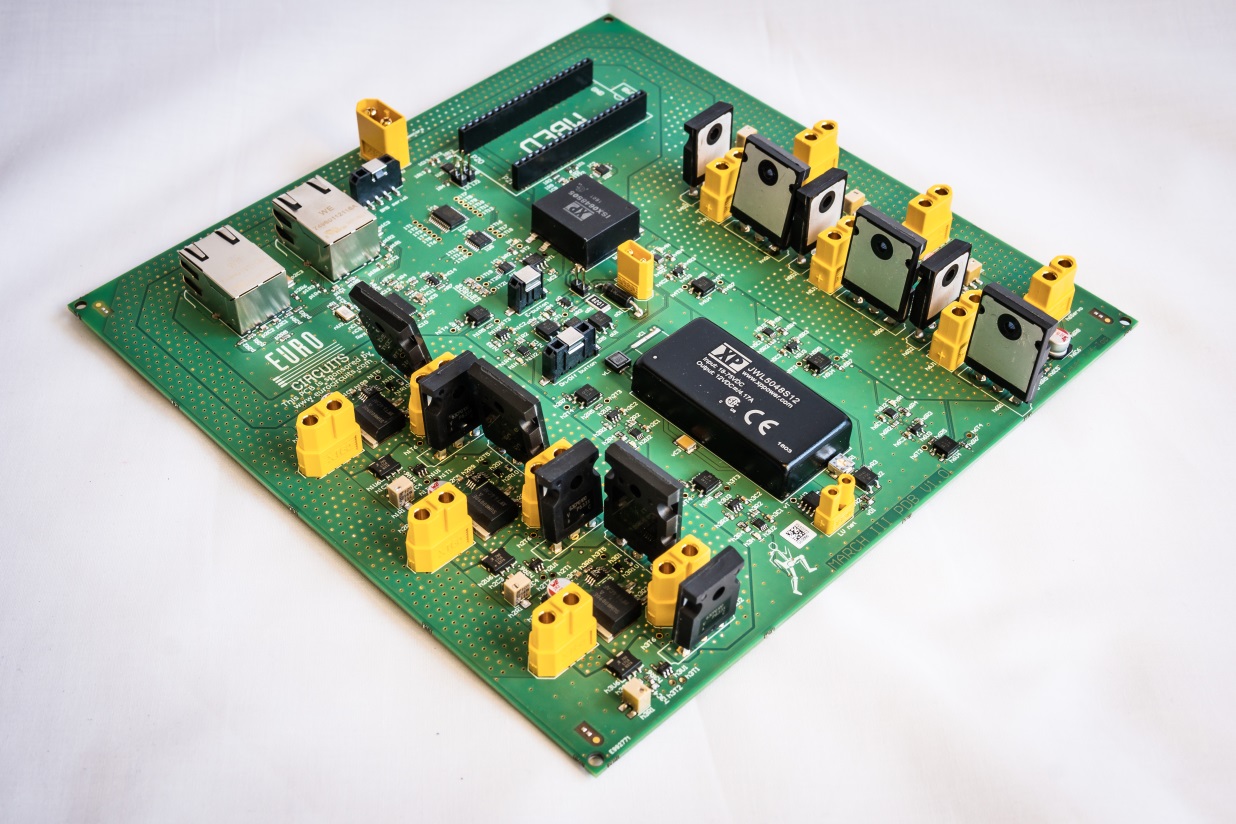