As part of The Berlage Sessions, Linda Vlassenrood gives the lecture 'Mulder’s Amsterdam'.

Jakoba Mulder (1900–1988) was one of the first women to graduate from the Institute of Technology in Delft, now known as the TU Delft, with a civil engineering degree, in 1926, and she subsequently specialised in urban development. Mulder went to work for the city of Delft as an adjunct engineer on the Zuid-Holland West regional development plan in 1928. In 1930, Mulder—who possessed what was then unique experience in urban planning—became the first female architect to take up a similar post in the city of Amsterdam’s urban development department. She joined a core team made up of the department head and urban planner L.S.P. Scheffer (1887–1974), the designer Cornelis van Eesteren (1897–1988) and the academic researcher Th.K. van Lohuizen (1890–1956), who were working on a basic design for Amsterdam’s General Expansion Plan (Algemeen Uitbreidingsplan, or AUP).

After the Second World War, it was Mulder who developed and elaborated the layout of subplans as the department’s chief architect. Mulder worked and steered—through the many committees she joined inside the public works department—meticulously on very different scales for decades. She ultimately ran the urban planning department from 1958 until 1966. Mulder was determined on establishing a continuous green network in the post-war districts. She argued that buildings and green space should be of equal importance. She introduced the courtyard layout in the garden city of Frankendaal in 1949 to provide residents with “an outdoor living room”. This layout was adopted on a wide scale in the other districts. Amsterdam’s playground policy was another Mulder showpiece. “Mulder’s Amsterdam” will focus on the complexity of postwar production through her humanistic perspective.

Linda Vlassenrood is an independent curator and program manager, and formerly chief curator at the Netherlands Architecture Institute (NAi). She is currently conducting research on urban planner Jakoba Mulder (1900–1988), supported by the Creative Industries Fund NL and the city of Amsterdam’s Planning and Sustainability as well as Monuments and Archeology department. 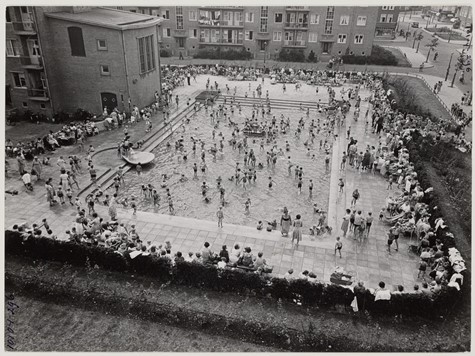