“The digital era of today is defined by the dominance of the mobile+cloud mode of operation. The front-end is limited to the Google-Apple duopoly, which determines what you are allowed to do and see with your phone. The backends are slightly more competitive, with offerings from a handful of content delivery networks and megawatt- sized datacenter operators offering advanced services on a global scale alongside a shrinking set of enterprise-owned private clouds. The front-end and backend are inherently connected and interdependent.

As a case study, I will discuss how digital contact tracing leveraged the mobile+cloud model, together with the lessons learned from that experience, and the controlling influence of the mobile+cloud era. I will discuss some of the reasons behind this dominance, and some of the implications and challenges for consumers, enterprises and government organisations that need to manage overall risks by trading off technological risks, operational risks, and legal security. I will conclude with some early research directions aimed at adding transparency-by-design into systems and applications.” 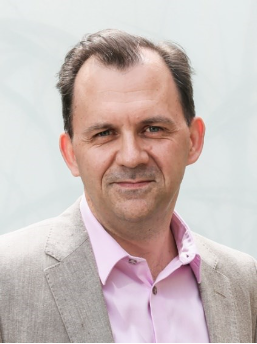 Prof. Edouard Bugnion joined EPFL in 2012, with a teaching and research focus on datacenter systems. His areas of interest include operating systems, datacenter infrastructure (systems and networking), and computer architecture.

Before joining EPFL, Edouard spent 18 years in the US, at Stanford (MS ’96, PhD ’12) and co-founded two startups: as VMware’s original CTO and at Nuova Systems (acquired by Cisco), where he became the VP/CTO of Cisco’s Server, Access, and Virtualization Technology Group.

Prof. Bugnion is an ACM Fellow and a member of the Swiss Academy of Technical Sciences (SATW). He received the ACM Systems Award in 2009 in recognition for VMware, a 2008 ACM SIGOPS Hall of Fame Award for his paper on “Disco”, and Best Paper Awards from SOSP, OSDI and Eurosys. Bugnion serves on the Swiss National Scientific COVID-19 Task Force as the lead expert for digital technologies and is an independent Director of Logitech, of the International Committee of the Red Cross (ICRC) and of InnoSuisse (the Swiss Innovation Agency). 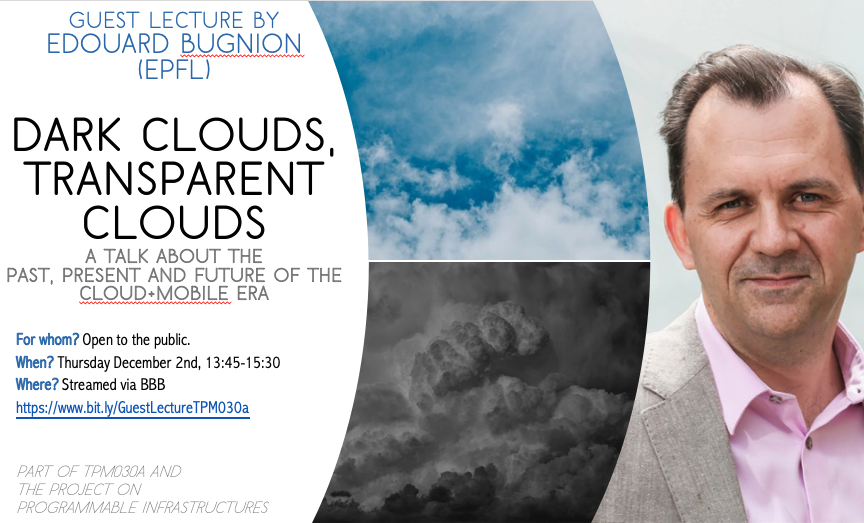 Where? TBA. Streamed via BBB in all cases; if the situation allows, also on-campus (hybrid). Updates will be posted in the BBB room: see www.bit.ly/GuestLectureTPM030A

This guest lecture is part of the 2nd-year MSc course 'TPM030A Introduction to Cloud as Infrastructure: The Effects of the Business of Computing on Practice' and the Project on Programmable Infrastructures.