Prof. Dekker has contributed seminal advances at the top of her field of biological physics. Her research focuses on fundamental biological topics such as transcription, replication, and DNA topology that have also a strong link to biomedical research. In order to understand these critical biological processes, she quantitatively probes the dynamics of single molecules of DNA, enzymes, and molecular motors, thus generating a precise and mechanistic biophysical perspective. Her successful research efforts have included real-time studies of processive molecular motors (e.g. polymerases) on DNA and RNA, experiments that probe the mechanisms of DNA-binding proteins involved in DNA compaction (e.g. nucleosomes, tetrasomes) and the termination of replication, and examination of the enzymes that regulate DNA topology (e.g. topoisomerases). The latter included ground-breaking experiments on the understanding of chemotherapeutic inhibitors in clinical use, uncovering a new mechanism through which they influence the activity of topoisomerase enzymes. Her research at the single-molecule level has also included the context of live bacterial cells, which places her research group in the unique position of being able to quantitatively compare the behavior of individual biological molecules both in vitro and in vivo. In recent years, Prof. Dekker has concentrated her research efforts in the study of the dynamics of the complete eukaryotic replication fork at the single-molecule level. This research is at the forefront of scientific research, as the ability to reconstitute a eukaryotic replication fork in bulk has only become possible in 2015. Since then, her group has been able to purify all the proteins involved in yeast replication and studies on the loading and activation of the yeast replisome using high end single-molecule equipment is ongoing. Understanding the mechanisms that underlie eukaryotic replication provides a key that will link to our understanding of disease development such as genetic disorders and cancer.

Prof. Dekker is actively engaged in teaching activities and professional societies. In 2019, she was elected as a member of the prestigious organization European Molecular Biology Organization (EMBO). In 2015, she was inaugurated as a member of the Netherlands Royal Academy of Arts and Sciences. Prof. Dekker has also been a member of the Council of Professors of the TU Delft, which advises the board of the university concerning professorial appointments and other matters. Prof. Dekker has also served as Vice-Chair of the Executive Board of the Foundation for Research on Matter (FOM). Until the start of 2017, FOM, was the principal funder of physics research in The Netherlands. Since then, the foundation has become part of the Netherlands Organisation for Scientific Research (NWO). Prof. Dekker is a co-founder of the Department of Bionanoscience, together with her colleague Prof. Cees Dekker (no relation).

Our group focuses on understanding the key cellular process of nucleic acid replication from a combination of biochemical and biophysical approaches in viral, bacterial, and eukaryotic systems. We perform our studies both using purified components and inside living cells. To study in particular the dynamic aspects of replication, we make use of state-of-the-art biophysics that is highly integrated with biochemistry. 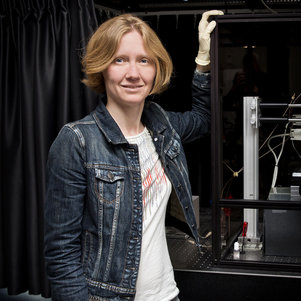